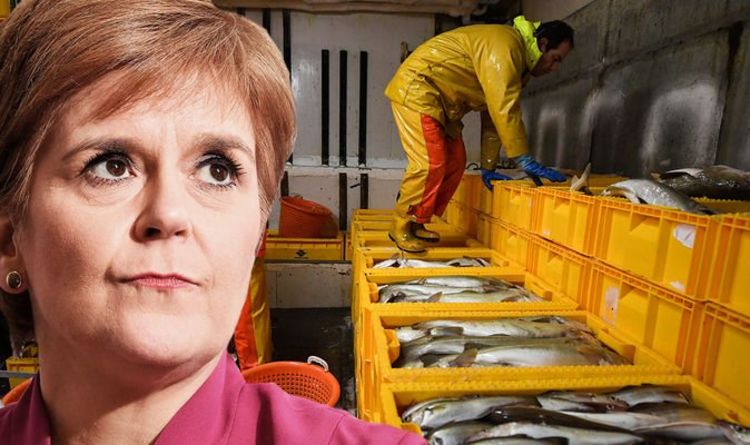 Scotland’s First Minister Ms Sturgeon has been prominently anti-Brexit ever since the EU referendum and has been proposing to take Scotland back into the EU if her independence bid is successful. If this went ahead, Scottish fisherman would have to follow the contentious Common Fisheries Policy once again, an EU law which meant all member states had equal access to fishing waters. Despite the protests against this from coastal communities, Ms Sturgeon would effectively be handing the fisheries back to the EU if she succeeded in her dream of independence.

However, the last time Scotland tried to take control of its own fisheries by drafting an alternative to Westminster’s EU Withdrawal Bill, it was rejected by the Supreme Court.

According to City AM, the Supreme Court decided farming and fishing were “outside of the legislative competence” of the Scottish Parliament in December 2018.

The judges said the proposed Scottish bill “as a whole” was within Holyrood’s abilities, but MSPs did not have the power for the farming and fishing areas, infuriating the Scottish Parliament.

The row began when MSPs passed their own Brexit bills in March after refusing to support Westminster’s EU Withdrawal Bill.

Holyrood were refusing to give their consent to the Commons’ plan on how powers which were previously held by Brussels would be divided up after Brexit.

The case made its way up to the Supreme Court after the UK courts completely rejected the Scottish bill.

However, the President of the Supreme Court, Lady Hale, did admit that “the whole of the Scottish bill would not be outside the legislative competence of the Scottish Parliament” – but fishing and farming would be.

The judges explained that changed made later to the UK legislation which prevented MSPs from modifying various elements, meant that a further 21 provisions could not go through as a result.

Then-Scottish Secretary David Mundell commented that the court had “provided much-needed legal clarity” and shown that the bill “goes beyond the powers of the Scottish Parliament”.

However, Scottish Brexit Secretary Mike Russell said the UK government had “changed the rules of the game midway through the match” in an “act of constitutional vandalism”.

Director of public policy at Scottish legal giant Pinsent Masons Andrew Henderson told City AM: “Of the many challenges posed by Brexit, its potential impact on the UK’s devolution settlement is proving increasingly complex.

“The court has found that the Scottish parliament did act outside of its legislative competence on one count – pursuing measures which might result in modification of the Scotland Act, a power that devolved institutions of Scotland do not enjoy.

“The UK Government and opponents of the SNP will trumpet this aspect of the ruling.”

The SNP’s stance over handing the common fisheries policies back to the EU has continued to be a cause for concern over the last few months.

In December, Ms Sturgeon went on BBC Radio 5 Live and explained what an independent Scotland would do with its fisheries.

She said: “The SNP has argued against the Common Fisheries Policy for almost the entirety of its existence.

“We have put forward proposals for reform of the Common Fisheries Policy and we would continue to do that if we were in the European Union.

We do believe it is important to have greater control over Scottish waters but we also know that it is important and this is where I think the whole Brexit argument falls down.

Facebook
Twitter
Pinterest
WhatsApp
Linkedin
ReddIt
Email
Tumblr
VK
Previous articleCruise: Aways pack this one key item in your luggage for a cruise holiday to stay safe
Next articleCoronavirus vaccine: Will someone develop a vaccine? Why not?