Supermoon 2020: Look out for April's Pink Supermoon next week... 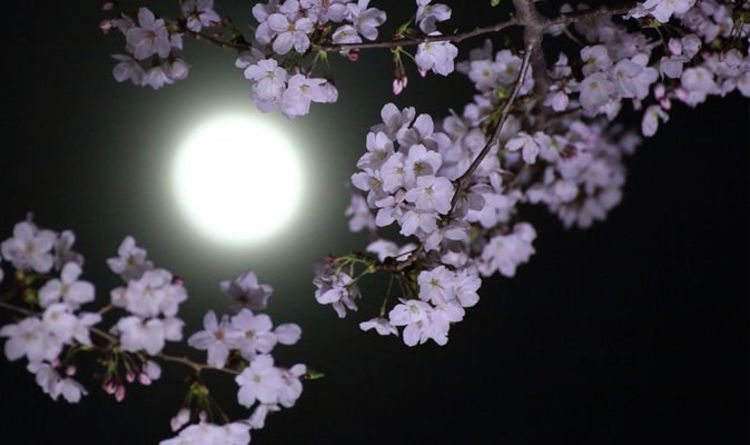 What is a Supermoon?

The Moon orbits our home planet on an irregular trajectory that brings it closer and farther to us on different nights.

When the Moon is closest to us, it reaches its lunar perigee or lowest orbital height.

When the Moon is farthest away from us, it is at apogee or its highest orbital height.

If a Full Moon appears within 90 percent of perigee or apogee, we witness a Supermoon or Micromoon, respectively.

READ MORE: Life on Mars: ‘Alien lizard’ on Mars ‘unlike anything’ on Earth

The two terms are not scientific but describe astronomical phenomena that are easily enjoyable by all.

A Full Moon at perigee can appear up to 14 percent bigger and 30 percent brighter than the regular Moon.

The US space agency NASA said: “The term ‘Supermoon’ was coined in 1979 and is often used today to describe what astronomers would call a perigean Full Moon: a Full Moon occurring near or at the time when the Moon is at its closest point in its orbit around Earth.

“The term gives preference to the geometric alignment of Sun-Earth-Moon and allows the occurrence of perigee into a wider time period than the actual instant of perigee – up to about two weeks, which is almost half of the Moon’s orbit.”

When is the Pink Supermoon next week?

The Pink Moon will peak this year early on Wednesday, April 8.

Why is the April Full Moon called the Pink Moon?

April’s Full Moon is sometimes known as the Egg Moon, the Paschal Moon or the Fish Moon.

The unusual names are linked to old folklore tales and naming traditions from across the world.

Many of the names, like the Pink Moon, were adopted by colonial Europeans from Native American traditions.

By this convention, the Pink Moon is said to have been named after a type of pink flower that blooms around the start of spring in North America.

he names helped keep track of time and reflected seasonal changes in the landscape and wildlife.

The May Strawberry Moon, for instance, is named after wild strawberries ripening around that time of year.

Amy Nieskens of The Old Farmer’s Almanac said: “April’s Full Moon is known as the Full Pink Moon because it heralded the appearance of wild ground phlox or moss pink, one of the first spring flowers.

“It is also known by many other names to herald the coming of spring, including the Sprouting Grass Moon, the Egg Moon, and the Fish Moon.”