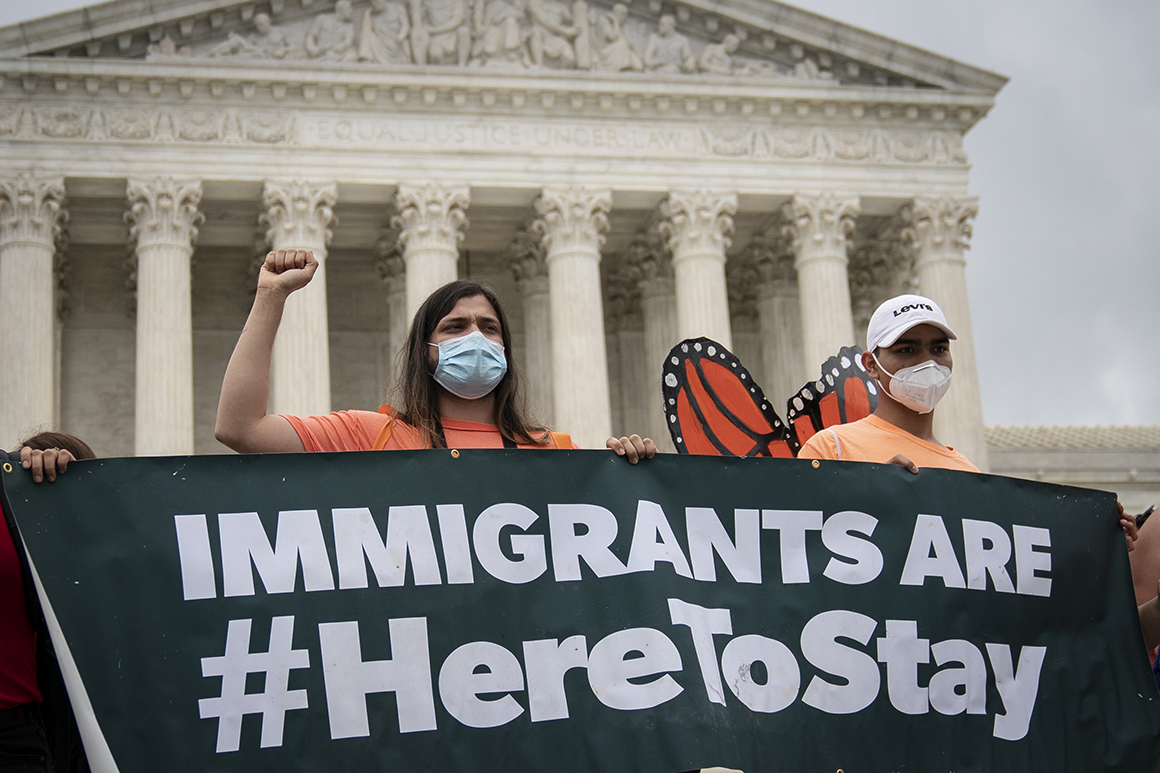 Roberts, who has emerged in recent years as a semi-regular swing justice on the court, wrote the majority opinion concluding that the decision to phase-out the program was unlawful because it did not consider all the options to rein in the program and failed to account for the interests of those who relied on it.

Roberts said that the Trump official who ordered the wind down in 2017, acting Homeland Security Secretary Elaine Duke, erred by failing to consider whether it was possible to eliminate the work permits issued to DACA recipients without ending the limited protection they enjoy from deportation. He also said she didn’t give adequate thought to how important the program was to those with DACA status.

“Here the agency failed to consider the conspicuous issues of whether to retain forbearance and what if anything to do about the hardship to DACA recipients,” Roberts wrote. “That dual failure raises doubts about whether the agency appreciated the scope of its discretion or exercised that discretion in a reasonable manner. The appropriate recourse is therefore to remand to DHS so that it may consider the problem anew.”

Justices Clarence Thomas, Samuel Alito, Neil Gorsuch and Brett Kavanaugh all dissented from the decision and said they would have allowed the administration’s phase-out of DACA to proceed.

Thursday’s ruling was the second major defeat for the Trump administration at the Supreme Court this week. On Monday, the justices issued an unexpected 6-3 decision that a more than half-century old federal civil rights law forbids discrimination on the basis of sexual orientation or gender identity. The Trump administration had urged the court to reach the opposite result.

Trump responded to the back-to-back Supreme Court losses with an apparent effort to fire up his conservative base.

“These horrible & politically charged decisions coming out of the Supreme Court are shotgun blasts into the face of people that are proud to call themselves Republicans or Conservatives. We need more Justices or we will lose our 2nd. Amendment & everything else. Vote Trump 2020!” he wrote on Twitter.

Trump added a short time later: “Do you get the impression that the Supreme Court doesn’t like me?”

How much traction Trump will get on the courts issue this time around is unclear, in part because GOP appointees have not been 100% reliable votes in support of the administration’s views and policies. Gorsuch, a Trump appointee and a favorite of many legal conservatives, wrote Monday’s opinion backing LGBT rights, joining with the court’s liberals and Roberts.

The broader political fallout from the DACA decision was murky, but it could diminish the significance of immigration as an issue in the November election.

A ruling upholding Trump’s action would have set off a panic among many DACA recipients and would have led to intense pressure on moderate Republican senators to find some way to offer relief to the hundreds of thousands directly affected and their U.S. citizen family members.

The high court decision averts that kind of a political scramble in the coming months, but does not extinguish the future of the Dreamers as a political issue. Given the pathways the court’s action leaves open to ending DACA in the future, it offers no long-term guarantee that the program will remain in place.

Three of the conservative justices indicated they had concluded that DACA was flatly illegal in the first place, so the Trump administration was free to end it.

“DHS has no implicit discretion to create new classes of lawful presence or to grant relief from removal out of whole cloth. Accordingly, DACA is substantively unlawful,” Thomas wrote in a dissent joined by Alito and Gorsuch. “This conclusion should begin and end our review.”

Thomas also said DHS didn’t need to dwell on how people had used the program because, when it was launched in the Obama administration, officials made clear that it could be terminated at any time.

“It is inconceivable to require DHS to study reliance interests before rescinding DACA considering how the program was previously defended. DHS has made clear since DACA’s inception that it would not consider such reliance interests,” Thomas wrote.

Kavanaugh passed up the opportunity to join that opinion and never said in his opinion whether he believed the Obama program was lawful. He said that despite doubts about Duke’s original explanation for terminating DACA, he was satisfied with the re-do of sorts that Homeland Security Secretary Kirstjen Nielsen issued in 2018 after the first action ran aground in court.

The majority opinion rejected Nielsen’s explanation as a dubious “post hoc” justification because it was issued nine months after the original decision.

Prior to Thursday’s ruling, Trump had repeatedly said he’d like to reach a deal with Congress to give legal status to the Dreamers. He has claimed those talks would’ve succeeded two years ago if initial court rulings hadn’t blocked his effort to shut down DACA.

However, Democrats have argued Trump blew up the negotiations by deferring to immigration hardliners seeking to implement a radical overhaul of the U.S. immigration system.

Congressional Democrats who have been trying to pass plans to legalize the status of the Dreamers for more than a decade hailed Thursday’s decision.

“I cried tears of joy” Senate Minority Leader Charles Schumer said from the Senate Floor. “These wonderful DACA kids and their families have a huge burden lifted off their shoulders. They don’t have to worry about being deported, they can do their jobs,” he said.

The cases decided by the high court were launched by blue states and immigrant rights’ advocates after Trump embarked on his bid to eliminate the program in 2017. The central issue in the suits was not the legality of the DACA program President Barack Obama announced in 2012, but whether Trump’s move to begin winding it down complied with legal requirements.

In a series of rulings in 2018, an ideologically-diverse set of district court judges backed arguments that the Trump administration’s explanation for phasing out DACA was legally insufficient.

Attorney General Jeff Sessions said the program should be wound down because it was at risk of being abruptly ended by litigation. No suit seeking to shut it down was pending at the time of the decision, but some red-state attorneys general were threatening to seek such an injunction from a judge in Texas who issued a ruling in 2015 blocking Obama’s expansion of the program.

Schumer hailed the same pair of decisions Trump lamented. The Senate minority leader suggested they were particularly welcome given ongoing national challenges related to the pandemic and unrest related to police violence against African Americans.

“Let me say this in these very difficult times, the Supreme Court provided a bright ray of sunshine this week,” he said referencing the high court’s ruling Monday enshrining anti-discrimination protections for LGTBQ workers. “To me, frankly, the Court’s decisions were surprising, but welcome” he added.