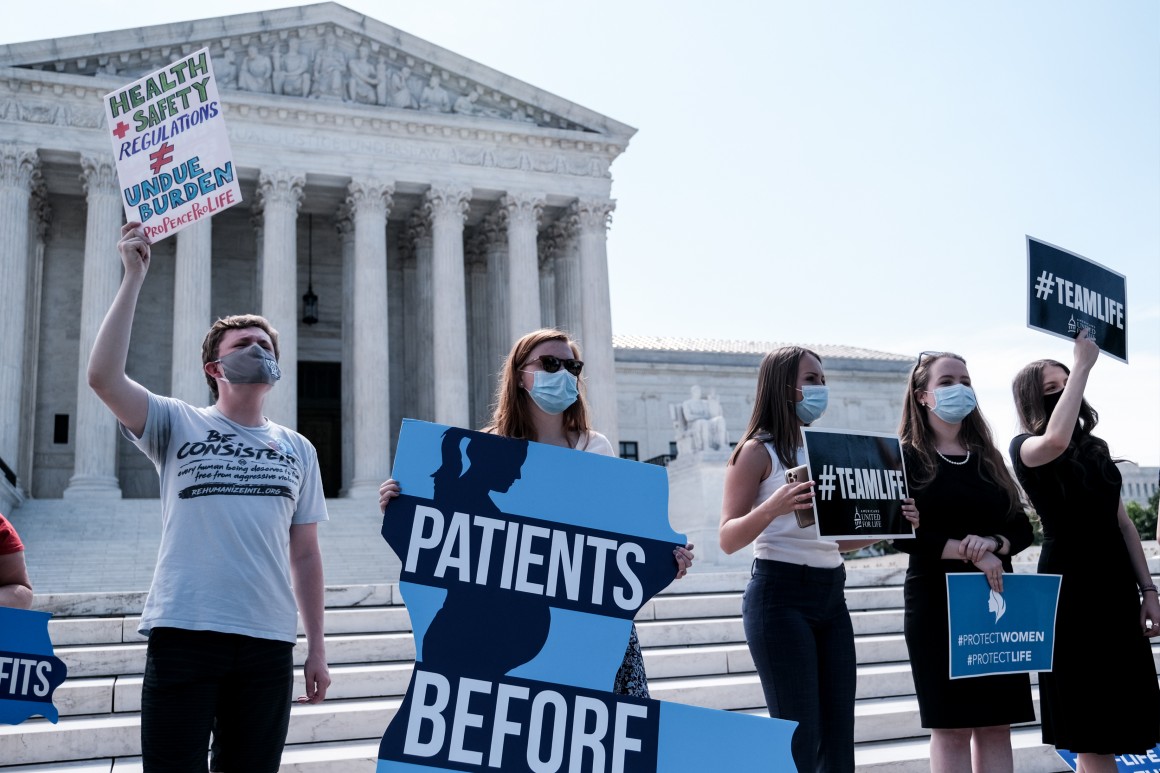 The justices on Thursday also turned away two cases out of Illinois and Pennsylvania challenging whether governments can shield areas in front of abortion clinics from protests. And the Supreme Court declined a separate Indiana lawsuit over the state’s efforts to revoke a South Bend abortion clinic’s license, allowing the clinic to remain open.

The court’s decision to punt on the Indiana abortion restrictions suggests the justices aren’t eager to immediately jump back into the national fight over abortion — and that the Louisiana decision may have far-reaching effects in the battle over the right to terminate a pregnancy.

It also indicates that Chief Justice John Roberts’ vote with the court’s liberal judges to overturn the Louisiana law earlier this week may not be the win for abortion rights that many assumed. Roberts said his vote in the case was bound by precedent, since the court in a 2016 case, Whole Woman’s Health v. Hellerstedt, rejected a nearly identical Texas law that also required abortion providers to have admitting privileges at local hospitals. Roberts, who said he disagreed with the liberal justices’ reasoning for striking down Louisiana’s law, in a concurring opinion signaled that he could take a more expansive view of when he would find abortion restrictions permissible.

“The liberal justices said courts have to balance burdens versus benefits when ruling on abortion laws,” explained Mary Ziegler, a law professor at Florida State University. “Roberts said he didn’t agree, that a law could be completely pointless, but as long as it’s not burdensome it can be constitutional. That departs significantly from the precedent in Whole Woman’s Health and means courts going forward could be more likely to side with the government.”

In the Texas case, the court found that the state’s admitting privileges law did not benefit the health and safety of women seeking abortions. Roberts, who had voted to uphold the Texas restrictions, on Monday wrote that courts were ill-prepared to make that kind of judgment and said they should follow the standard set by Planned Parenthood vs. Casey, in which the Supreme Court found states can impose waiting periods and other restrictions as long as they don’t create an “undue burden” on those trying to obtain the procedure.

Anti-abortion legal groups like the Alliance Defending Freedom said they saw Roberts’ opinion in the Louisiana case, June Medical Services v. Russo, as a “positive sign” for their efforts to enact laws like Indiana’s.

“I think it signals that the opinion in June Medical is very narrow and that other types of regulations that limit abortion to certain circumstances are very likely to be upheld if the Supreme Court chooses to hear them,” said Kevin Theriot, the group’s vice president.

The Louisiana case dealt with another issue — legal standing for abortion providers, who regularly lead challenges to state restrictions on the procedure. Roberts agreed with the court’s four liberal justices to find the clinics had standing, but his four conservative colleagues said they would have denied standing, effectively invalidating the lawsuit and potentially dozens like it nationwide.

The ongoing legal fight over Indiana’s 2016 abortion restrictions gives the courts another chance to debate the standing question.

The state’s restrictions briefly took effect in 2016 before pieces of it were halted by a federal judge months later. The 7th U.S. Circuit Court of Appeals upheld that decision in July 2018, which prompted Indiana’s request for Supreme Court review.

The justices spent an unusually long time deciding whether to take up the Indiana law. In May 2019, they issued a decision addressing some pieces of the law without first holding oral arguments. The court upheld a requirement for fetal remains from abortions to be buried or cremated rather than disposed of as medical waste, but it blocked another provision that would have banned abortions based on a fetus’ sex, race or disability.

Indiana argues that the contested policy is valid because it pairs two types of abortion regulations the court has separately allowed: a waiting period and an ultrasound requirement. Planned Parenthood and other groups challenging the law say combining those requirements forces women to make two separate trips to an abortion provider, posing a sometimes insurmountable hardship for low-income and rural patients.

The 7th Circuit could rehear the case as early as this summer, and it could come back to the Supreme Court next year. The American Civil Liberties Union, which argued the case alongside Planned Parenthood, said Monday it anticipates more ramifications from Roberts’ ruling in other abortion lawsuits.

“The Court has decided to give politicians opposed to abortion access another shot,” said Jennifer Dalven, the director of the ACLU Reproductive Freedom Project. “While we believe that the courts below will continue to see these laws for what they are — an unconstitutional attempt to push abortion further out of reach — the Court’s action is a stark reminder that the work to secure access to abortion for everyone is far from over.”

Anti-abortion and religious groups who helped fuel Trump’s 2016 campaign said this week’s Louisiana decision, while disappointing, underscored the importance of electing Trump to a second term so he could continue remaking the federal judiciary. Echoing that message, Pence on Twitter said this week’s ruling made clear: “We need more Conservative justices on the U.S. Supreme Court.”

But abortion rights groups say the court’s 5-4 decision will also be a motivating factor for progressive voters because it revealed the risk that abortion rights could be whittled away under Trump’s presidency. More abortion-related lawsuits are winding through the courts, including challenges to a recent spate of virtual bans that conservatives hope would trigger a direct Supreme Court challenge to Roe v. Wade.