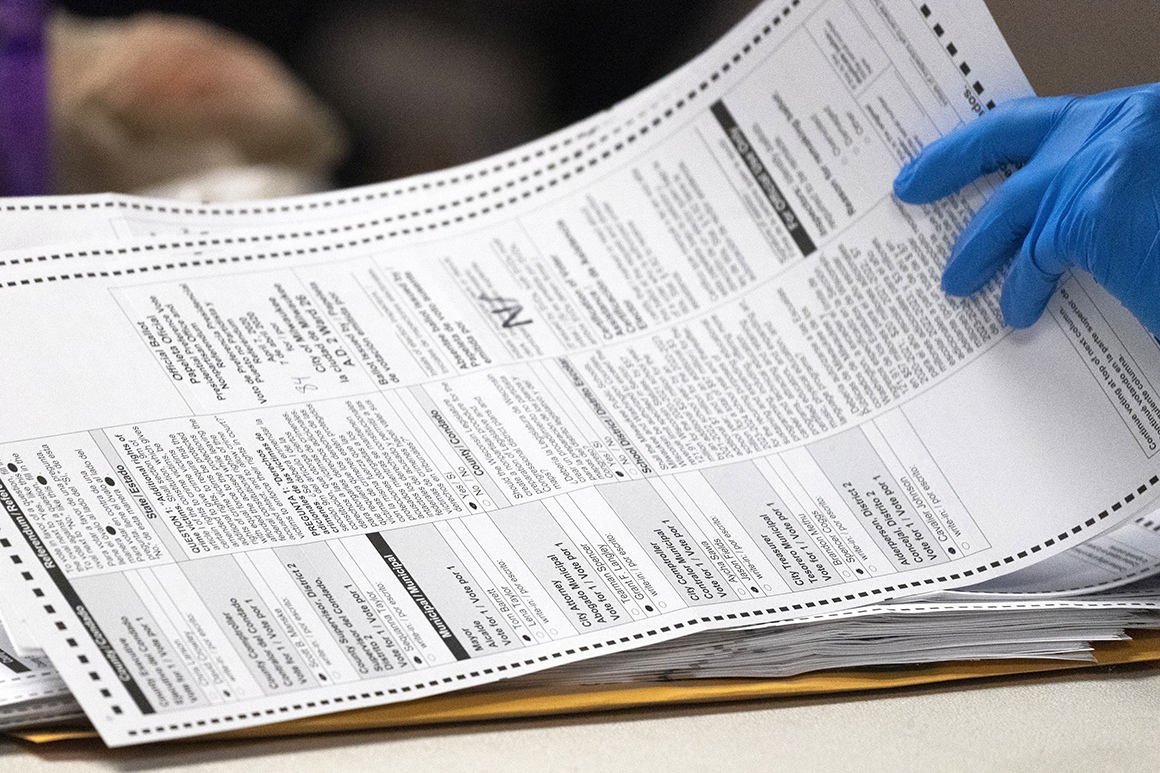 The order from the justices emerged just before the Senate voted to confirm Judge Amy Coney Barrett as President Donald Trump’s newest nominee to the high court. Barrett will be sworn in in a private ceremony on Tuesday, after another ceremony at the White House late Monday.

A District Court judge in Wisconsin issued an order on Sept. 21 pushing back the state’s due date for mail ballots from the close of polls on Election Day to Nov. 9, as long as they were postmarked by Nov. 3. Earlier this month, a three-judge panel of the 7th U.S. Circuit Court of Appeals split, 2-1, and suspended the lower court’s ruling.

While all the Supreme Court’s Democratic appointees joined in a single dissent written by Justice Elena Kagan, not all the Republican appointees explained their rationale.

However, several of the court’s conservatives signaled that they were abiding by legal precedents calling for federal courts to avoid making changes to voting procedures in the period shortly before an election.

“In this case, as in several this Court has recently addressed, a District Court intervened in the thick of election season to enjoin enforcement of a State’s laws,” Chief Justice John Roberts wrote in a solo concurring opinion, calling the lower court’s action “improper” and denying Democrats’ application to lift the stay granted by the appeals court.

In Kagan’s dissent, the court’s liberal wing decried the majority’s ruling, arguing that it displayed an indifference to voters affected by the pandemic.

“Because the Court refuses to reinstate the district court’s injunction, Wisconsin will throw out thousands of timely requested and timely cast mail ballots. And today’s decision does not stand alone,” Kagan wrote, joined by Justices Stephen Breyer and Sonia Sotomayor. “As the COVID pandemic rages, the Court has failed to adequately protect the Nation’s voters.”

Justices Neil Gorsuch and Brett Kavanaugh wrote opinions arguing that permitting the extension the judge granted in Wisconsin would open the door to micromanagement of elections by the federal courts.

Roberts appeared to concur with the basic thrust of Gorsuch‘s and Kavanaugh’s opinions but emphasized that the presumption against late interventions applies to federal courts, not necessarily state ones. Roberts recalled a similar battle in Pennsylvania, where he joined the court’s liberal bloc in a 4-4 tie last week, which effectively upheld an order from the commonwealth’s Supreme Court extending ballot-return deadlines in the state.

“While the Pennsylvania applications implicated the authority of state courts to apply their own constitutions to election regulations, this case involves federal intrusion on state lawmaking processes,” Roberts wrote. “Different bodies of law and different precedents govern these two situations and require, in these particular circumstances, that we allow the modification of election rules in Pennsylvania but not Wisconsin.”

Republicans have since asked the Supreme Court to take up the case fully and on an expedited basis, teeing up a decision on whether state courts have the authority to interpret state election statutes and vary from them under some circumstances

Kavanaugh went much further than the chief justice, arguing that there might be a role for the federal judiciary to step in and intervene with a state court’s electoral rulings, citing in part then-Chief Justice William Rehnquist’s concurring opinion in Bush v. Gore. That concurrence, in a case that effectively decided the 2000 presidential election, argued that the Constitution deferred specifically to state legislatures with setting the terms of elections, and that the Florida Supreme Court overstepped. Justice Clarence Thomas signed on to Rehnquist’s concurring opinion at the time.

“That said, under the U.S. Constitution, the state courts do not have a blank check to rewrite state election laws for federal elections. Article II expressly provides that the rules for Presidential elections are established by the States ‘in such Manner as the Legislature thereof may direct,’” Kavanaugh wrote, emphasizing legislature. “As Chief Justice Rehnquist persuasively explained in Bush v. Gore … the text of the Constitution requires federal courts to ensure that state courts do not rewrite state election laws.”

Gorsuch, too, seems to share a less-strident but not dissimilar reading. He did not cite Rehnquist’s still-controversial concurrence, but wrote that “the Constitution provides that state legislatures — not federal judges, not state judges, not state governors, not other state officials — bear primary responsibility for setting election rules.”

Wisconsin normally mandates that ballots are in the hands of election officials by Election Day for them to count, regardless of when they are mailed. After a back-and-forth legal battle in early April, which ultimately made its way to the Supreme Court, ballots that were postmarked by the state’s spring election, which featured the presidential primary and a hotly contested state Supreme Court race, and returned by the following Monday would count.

This, in effect, franchised more than 79,000 Wisconsin voters, whose ballots arrived between the spring election on April 8 and the new deadline on April 13, according to a report from the state’s election agency. They accounted for roughly 7 percent of the total absentee ballots returned.

The Supreme Court has yet to act on a similar emergency application from North Carolina, where Republicans are seeking to overturn the state election board’s agreement to extend the receipt period for postmarked ballots to nine days after the election, up from the usual three days.

Last week, a bitterly divided federal appeals court voted, 12-3, not to disturb the extension. Notably, though, three Trump appointees joined with the court’s Democratic appointees in declining to block the extension.

Assuming no action on the North Carolina case before Barrett takes up her new post, the justices will now have to consult their new colleague on her views. While Thomas conducted a ceremonial swearing-in for Barrett on Monday night at the White House, the court said in a statement that she would not officially assume her role as a justice until she took the judicial oath from Roberts on Tuesday in a private ceremony at the high court.

ByBen White Perhaps most important, Yellen’s relationships with current Fed officials and knowledge of how the central bank can assist an economy still staggering from...
Read more
US

ByIn a statement following the announcement on Monday, Mr Biden said: "I need a team ready on Day One to help me reclaim America's...
Read more