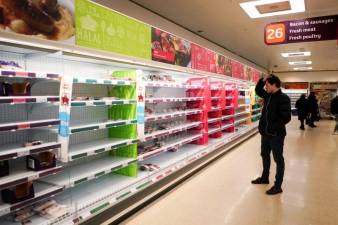 HONG KONG: Evidence of the devastation wreaked on the global economy by the coronavirus pandemic mounted on Tuesday as activity surveys for March from Australia and Japan showed record falls, with surveys in Europe and the United States expected to be just as dire.

After an initial outbreak in China brought the world’s second largest economy to a virtual halt last month, an ever growing number of countries and territories have reported a spike in infections and deaths in March.

Entire regions have been placed on lockdown and in some places soldiers are patrolling the streets to keep consumers and workers indoors, halting services and production and breaking down global supply chains.

Mirroring the emptying of supermarket shelves around the world, indebted corporates have rushed into money markets to hoard dollars, with a global shortage of greenback funding threatening to cripple firms from airlines to retailers.

“The coronavirus outbreak represents a major external shock to the macro outlook, akin to a large-scale natural disaster,” analysts at BlackRock Investment Institute said in a note.

Purchasing Managers’ Index (PMI) surveys from Japan showed the services sector shrinking at its fastest pace on record this month and factory activity contracting at its quickest in a decade.

Services PMI slumped to a seasonally adjusted 32.7 from February’s 46.8 and manufacturing PMI fell to 44.8 from a final 47.8 last month. The 50 mark separates growth from contraction.

The survey results were consistent with a 4% contraction in the economy in 2020, Capital Economics senior economist Marcel Theliant said. The likely postponement of the Tokyo Olympics is expected to deal a heavy blow to the world’s third largest economy.

In Australia, the CBA Services PMI fell to a record low of 39.8 as restaurants, cafes and tourism were hit hard by travel bans and cancellations of events and concerts.

A separate analysis of card spending data by Commonwealth Bank of Australia showed shopping outside of grocery, alcohol and healthcare was bleak. A weekly consumer confidence gauge by ANZ-Roy Morgan plunged to 30-year lows at 72.2 points.

Later on Tuesday, the euro zone composite PMI is expected to come in at 38.8, the lowest since early 2009. U.S. manufacturing and services PMIs are also expected at multi-year lows of 42.8 and 42.0, respectively.

With most asset markets tanking, global central banks have been rolling out extraordinary measures on an almost daily basis to stop the rot.

For the first time, the Fed will back purchases of corporate bonds, backstop direct loans to companies and “soon” will roll out a program to get credit to small and medium-sized business. It will also expand its asset purchases by “as much as needed.”

Still, some analysts say infinite monetary policy easing may not be enough and fiscal steps are crucial. The latest U.S. effort on that front remains stalled in the Senate as Democrats said it contained too little money for hospitals and not enough limits on funds for big business.

Finance and monetary leaders from the world’s 20 largest economies agreed on Monday to develop an “action plan” to respond to the pandemic that the IMF now expects to trigger a global recession, but offered no specifics.

“For the U.S. economy to be able to come out of the current crisis and the ongoing recession relatively unscathed, more radical policy interventions will be needed in the next few weeks,” Anna Stupnytska, global head of macro and investment strategy at Fidelity International said.

Speculation is mounting that data due on Thursday will show U.S. jobless claims rose an eye-watering 1 million last week, with forecasts ranging as high as 4 million.

Goldman Sachs warned the U.S. economy could contract by an annual rate of 24% in the second quarter, two-and-a-half times greater than the previous biggest contraction in the period after World War Two.

Asia is also easing monetary conditions across the board, with the Thai central bank expected to join regional peers in cutting rates on Wednesday.

With the Bank of Japan running out of ammunition, the pressure is on the government, which is looking into offering cash payouts to households as part of a package that could be worth more than $ 276 billion.

The Reserve Bank of Australia has flooded the system with nearly A$ 65 billion since March 12. It has also purchased A$ 9 billion in government bonds since launching its “unlimited” quantitative easing programme on March 20.

The Australian government also announced a stimulus package of A$ 66.1 billion on top of the A$ 17.6 billion flagged earlier this month.

New Zealand said on Tuesday that retail banks will offer a six-month principal and interest payment holiday for mortgage holders and small business customers whose incomes have been affected by the economic disruption from COVID-19.

“Despite aggressive moves by central banks, investors remain unconvinced that any of these actions will be enough to stave off the ill effects from (the virus),” ING Asia economist Prakash Sakpal said. – Reuters