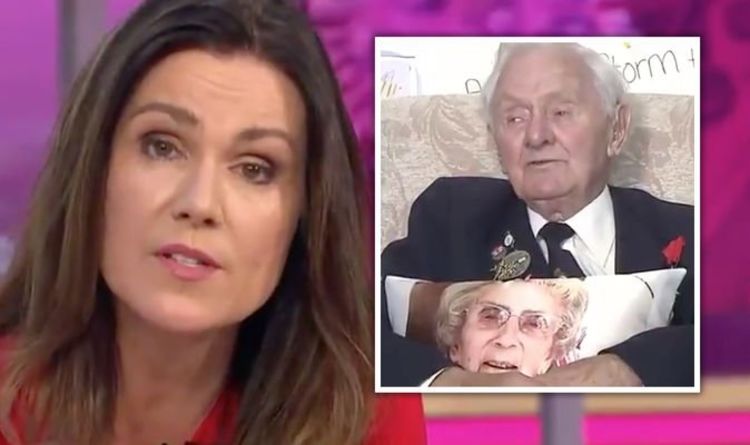 Susanna Reid, 49, was on hand to host Good Morning Britain today alongside co-star Piers Morgan, 55, and in an attempt to lift viewers spirits, they spoke with D-Day veteran Ken. After becoming an internet sensation, the war hero recalled his life with Aida and their 70-year marriage together. On hearing the story of the guest’s beloved, the host said she and others had been left in tears over the video of him getting a pillow with his other half’s on.

Ken has always slept with a picture of his late wife Aida since moving into Thistleton Lodge nursing home and the longing for his beloved didn’t go unnoticed by those caring for him.

Care worker Kia Mariah Tobin wanted to give the pensioner something to remember his wife by which was a bit more comfortable to sleep with.

In a one minute video, which has now gone viral on social media, shows the carer gifting the 94-year-old with a pillow of his Aida’s face on it.

Bursting into tears, it was clear the elderly man was thankful for the thoughtful present, meaning he can always have his late wife with him.

Much like him, Susanna was touched by the kind gesture of the gift and had to fight back the tears as she spoke with the man himself.

After hearing how the gift came about, Ken explained how he and Aida had never wanted to live in a nursing home after visiting several care residences during his time as chairman of the Normandy and War Veteran Association in Blackpool.

However, when their daughter booked them in for a two-week stay at Thistleton Lodge for some rest, the pair agreed they had fallen in love with the place.

They both lived there until the veteran’s wife passed away last August and her widow couldn’t have been more complimentary of the staff looking after him.

It was clear although his wife has now gone, Ken still thinks the world of her as he told hosts: “She made me the happiest man in the world.”

“Everyone was just so emotional about it,” she added, with Ken going on to talk about his life with Aida once more.

Ken said he thought his fellow war veteran was “a wonderful man,” stating: “No one could ask for more than what he has done.”

Rounding off the interview, Susanna admitted she had cried three times during the interview as it was so touching what Kia had done for the D-Day veteran.

ByAccording to astrologer Debra Silverman of Astrology Answers, this is the perfect time to get stuck into a scrumptious meal. Sagittarius loves to indulge "in...
Read more