Swinson on the brink: Remain voters turn on Lib Dems... 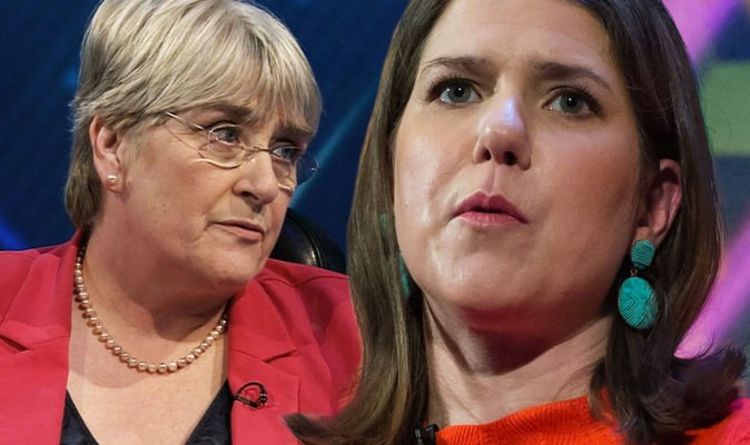 The party leadership was accused of spouting “hogwash” and becoming a ‘laughing stock” by indignant Remainers. The former Lord Chancellor is the MP for South West Hertfordshire and at the last election in 2017 he won the constituency with a huge 19,550 majority over Labour. The Liberal Democrats came a distant third, taking just under 12 percent of the total vote.

Mr Gauke was expelled from the Tory party in September, after backing plans to block a no-deal Brexit and has decided to run in his seat as an independent.

Remain voters believe that he has the best chance of defeating the Tories and are absolutely furious that the Liberal Democrats have refused to stand down their candidate.

Remainers fear that this will split the vote for Remain and gift the seat to the Tories.

Baroness Brinton, the President of the Liberal Democrats, tried to justify the party’s position on BBC’s Newsnight on Wednesday.

Asked why the Lib Dems were standing against the former Secretary of State for Justice, Baroness Brinton replied: “We are absolutely clear that we are a party that is fighting for Remain.

“And as Nick Watt outlined, David has not quite got to a Remain position.”

She countered BBC Newsnight presenter Emma Barnett’s assertion that Mr Gauke now supported staying in the EU, saying:”No, he is still saying his preference is for a soft Brexit.

“He is very pro a People’s Vote and we absolutely applaud him for that.

After her appearance, social media was flooded by angry messages from Remainers, who attacked the Lib Dems for their ideological intransigence and refusal to compromise.

One tweeted: ”I have had enough of “purist” positions. David Gauke has been pivotal in allowing the remain cause to continue to hope, we owe him a debt of gratitude.

A liberal Democrat supporter insisted she would go against her party and vote for the former Tory.

She wrote: ”He will fight a no deal. He’s pledged a second ref.

“He has the best chance of beating the newly parachuted in Tory (from Essex).