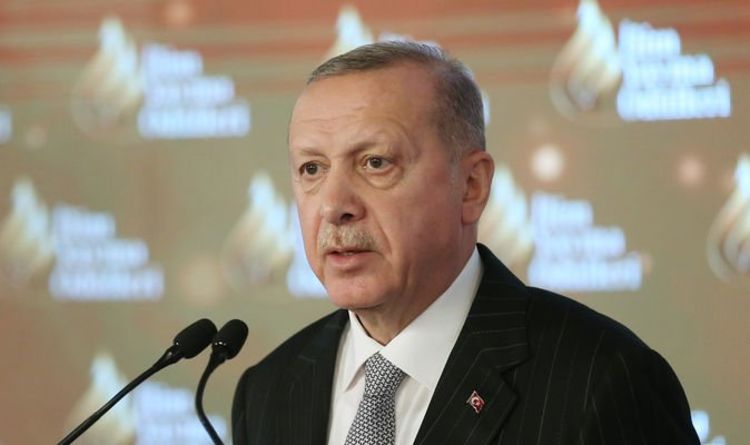 Thousands of refugees have fled to the border between Turkey and Syria amid the increased bombardment of the rebel-held Idlib province. Turkey has taken approximately 3.7 million Syrian refugees and has warned the effect of the new wave will be felt across the continent.

Speaking on Sunday, Mr Erdogan said his country “will not carry” such a burden on its own.

He added: “If the violence towards the people of Idlib does not stop, this number will increase even more.

“In that case, Turkey will not carry such a migrant burden on its own.

“The negative effects of this pressure on us will be an issue felt by all European countries, especially Greece.

“We call on European countries to use their energy to stop the massacre in Idlib, rather than trying to corner Turkey for the legitimate steps it took in Syria.”

Mr Erdogan also warned of a crisis similar to that of 2015 when a million people fled to Europe.

In order to mitigate against the disaster, Turkey has called on the creation of a safe zone in the north-east of Syria.

That area of land was seized from Kurdish forces in October.

He added: “We are putting up every effort with Russia for the attacks to stop, and we will continue to do so.

“In fact, we are sending a delegation to Moscow.

“They will hold meetings, and we will determine the steps we will take depending on the results.”

Turkey has backed the Syrian rebels fighting against Assad.

Crucially, however, Russia and Iran have supported the Assad regime throughout the eight-year civil war.

Although Turkey has tried to create a corridor to house the Syrian refugees, the European Parliament criticised the move earlier this month.

With the deteriorating humanitarian situation in the north-east of Syria since Turkey invaded, Brussels ha continued to criticise Mr Edogan’s plans.