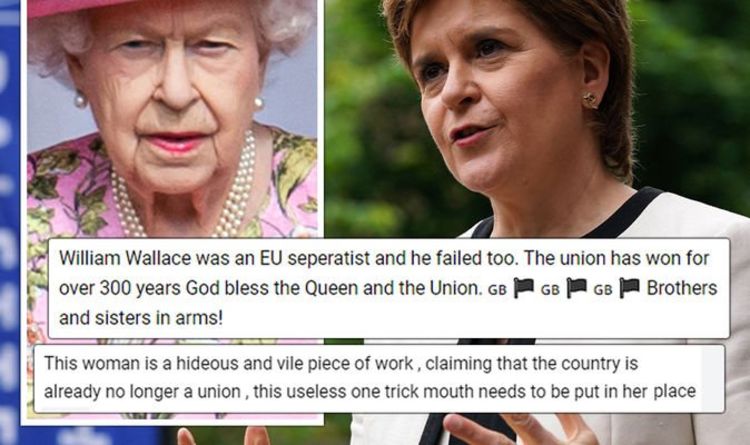 The monarch will visit charities and businesses in Edinburgh, Glasgow and Stirling. However, the move infuriated some online nationalists, with one branding it “patronising” and hoping “the heavens open” during the trip.

One nationalist tweeted: “Her previous union is dead…”

While someone else called the Queen a “sponger” who is going on a “free holiday”.

However, following their reactions, Scottish nationalists have been shamed for disrespecting the Monarch just months after she buried her husband Prince Philip.

One Express.co.uk reader said: “This woman is a hideous and vile piece of work, claiming that the country is already no longer a union.

“This useless one-trick mouth needs to be put in her place.”

Someone else said: “These ardent Scot Nats need to learn their history.

“The Act of Union of 1707 was driven largely by Scottish proponents to avoid impending bankruptcy, so the UK can hardly be described as QE’s Union.

“Like all fanatics, they never learn, blinkered by their own partisan version of events.”

Others said the SNP does not “speak for most of the Scottish people”.

One person said: “Most people in Scotland will be disgusted by the actions of a crazed minority.

“It won’t help the nationalists, but it will help the Union.”

Someone else said: “William Wallace was an EU separatist and he failed too.

“The Union has won for over 300 years God bless the Queen and the Union.”

Another Express.co.uk reader commented: “They don’t deserve to be part of the UK.

“Our Queen is one of the greatest humans on the planet.

“I say let’s have our own referendum on Scotland and kick them out!!!”

The four-day tour will last from June 28 to July 1, with the Queen staying at the Palace of Holyroodhouse.

Queen Elizabeth II will be joined by Prince William for one day and later Princess Anne.