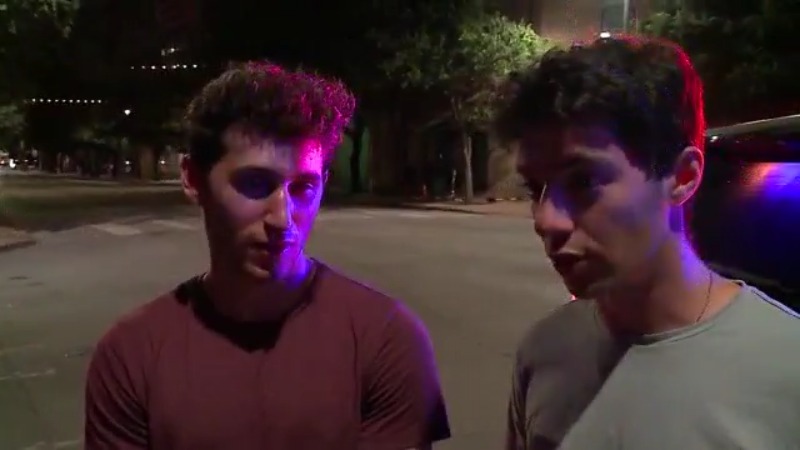 AUSTIN (KXAN) — It began like any other night on Austin’s world-famous 6th Street: music blaring as partygoers crowded the sidewalks and bars — then the gunshots sounded.

It happened just before 1:30 a.m. Saturday morning at 400 E. 6th Street, near Trinity Street, where at least 13 people were injured after a suspect opened fire in the heart of Austin’s entertainment district.

“Everything was totally fine,” witness Matt Perlstein said. “… there were just so many people in the street. And we just heard like, nine — a bunch — gunshots going off. Everyone got on the ground. We couldn’t even comprehend what was going on at the time. It’s still difficult to comprehend.”

David Frost was also on East 6th, out for a night of fun with his cousin. He said the chaos happened just as bars were closing up for the night.

“We’re all going outside,” said Frost. “Nobody knew anything was going on until the cops were like, ‘Hey get off the street… this is an active crime scene, go to your cars immediately and get out of the streets.’“

Frost said the shots were hard to hear from his vantage point, where typical Friday night noise — music and crowds — drowned out the mania.

“When you come out and you see the people, the cops putting up the crime scene tape, you know, it kind of hits close to home,” Frost said. “… it’s kind of surreal.”

While there were no fatalities, at least two of the 13 victims injured are in critical condition.

Meanwhile, Austin police are still searching for the suspected gunman: described as a Black man with a thin frame and locs-style hair.

Frost said this wasn’t the first shooting he’d seen on 6th Street and that it likely wouldn’t be the last. And not enough to keep him from visiting again.

“It would be nice to know that this will not happen in the future,” he said. “And that the police or whatever authorities in charge will make sure that something like this can’t happen.”