Shall we get this out of the way up front? This game features ‘furry’ characters. If you’re already heading to the comments to issue a humorous barb, please re-examine your life. Winds of Change is an accomplished, heartfelt and enjoyable visual novel that does not deserve to be held up against the invented, ludicrous stigma of being furry. Righto, cheers. That’s that. Let’s get on with the review, then.

Visual novels can be difficult to critique as games; the meat of the experience is with the writing and your enjoyment thereof, so all that can really be covered elsewhere is the UI, performance and possibly visuals. If we come out of the gate, then, and say that Winds of Change has all the features you’d want from a visual novel married with a good, compelling story, that’s about all some of you will need.

You are ‘the Seer’, as in see-er. An interesting in medias res opening is revealed to be a flash forward; a premonition, such as a Seer is wont to have, the subject of which is the destruction of their home and a mystical artifact known as the Blade of Exodus. It’s an interesting way to introduce the player to the game — show them a pivotal, horrifying moment of destiny then go “right, get out of that.” And, of course, you essentially spend your time reading text, looking at the rather good character art and backgrounds and wondering where all this is going, and just what the nature of the mysterious ‘Triumvirate’ actually is. 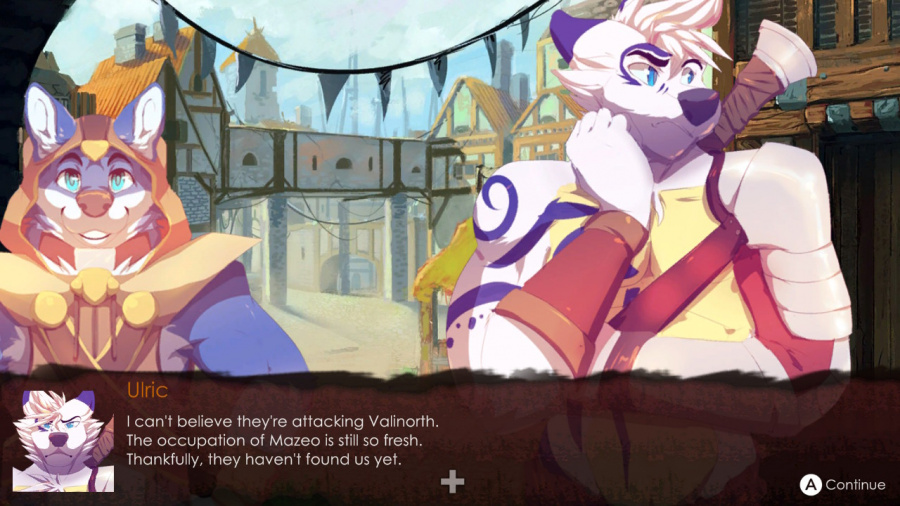 There are dialogue choices to be made; extensive ones, too, because there’s an enormous amount of lore to be wrung out of the world and it’s a pleasure to dig into it, interrogating the characters to witness their many, many optional conversation strands that flesh out and add colour to the proceedings. It helps that the voice acting is both exhaustive and rather wonderful — there’s a thoroughly enjoyable sense of verisimilitude to the interactions, with earnest line deliveries that don’t feel overwrought or played ‘too big’.

It makes the game a treat to play at its chosen pace, which is good because you can switch on Auto mode to (yes) automatically skip to the next line in time with the voiceover. And you should, because it’s quite easy to accidentally skip dialogue if you’re blasting through, usually hitting the ‘A’ button skips to the end of the passage, but if there’s a conversation choice to select it’ll automatically skip past it, which is non-ideal. We’d really recommend letting the game play out at its own pace, though; there’s a lot of dialogue but it’s all there to service the characters and their relationships — both romantic and otherwise — and yes, it’s very much LGBT friendly. There are background stats to take into account, too, which affect the flow of the story. The game tells you directly when these come into play, which is a nice user-friendly way to inform the player they haven’t (yet) screwed anything up. 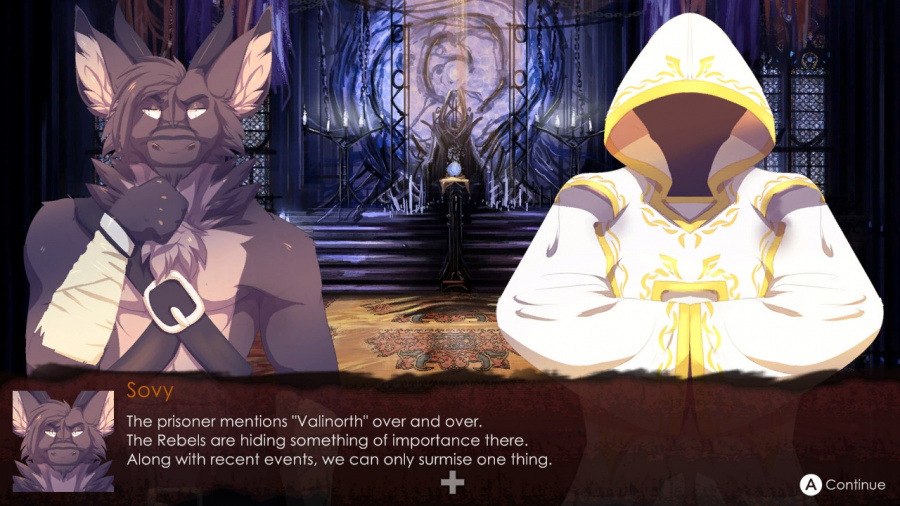 Breaking up the text are some very (very) light exploration elements, by which we mean you’re presented with a scene and able to move your cursor around it to investigate certain elements à la Phoenix Wright. These aren’t complex and essentially serve to add even more detail and intrigue to an already-rich story, but they do make for a nice — if brief — change of pace. Don’t worry about missing anything, either: the game will prompt you when your latest inspection of an item will trigger the next part of the story, allowing you to back off and dig deeper if you want to. You can also use these sections to chat to your current ‘party’ in a variety of optional discussions. There’s also a world map to explore and the ability to revisit areas with new party members to unlock more discourse, but this exposes one other issue in the game: it feels like there’s a fair bit of loading, considering the relatively static nature of the game.

There are side-quests too, but given the nature of the game these are going to fall flat if the story isn’t interesting and well told; we believe it is, as there’s very obviously a lot of passion and love for the characters and world imbued within Winds of Change, and it’s difficult not to appreciate. We didn’t see all of the content by any means, but our playthrough took a shade under twenty hours, using the autoplay function throughout in order to wring maximum enjoyment from the game’s voicework and pacing. Speed readers will naturally find it a shorter game.

As with all visual novels it will live and die by your interest in the characters and their story; we think there’s a good chance you’ll get into this one if you approach it knowing that there’s going to be a lot of text and dialogue — more even than most VNs — and that there’s little in the way of overt humour or any real tongue-in-cheek tone to ease up the somewhat intense storytelling.

This is thoroughly absorbing piece of fiction that manages to justify being a video game by virtue of skillfully integrated choices and missable content, making multiple playthroughs a potentially appealing prospect. The voice acting throughout is extremely impressively performed, the UI and controls are nearly perfect and the art is beautifully drawn, though we felt the characters could use a few more poses/expressions at times. Anyone interested in a ripping virtual novel yarn -. and who isn’t tediously prejudiced against any and all ‘furry’ content — will find a lot to love in Winds of Change.