The latest EA Sports event has begun with the launch of the official FIFA 21 Futties promo. Having dropped Futties Teams from last year’s event list, the promo has returned with the first batch of players now confirmed.

Putting together the best FUT 21 Cards into a new bundle, the Best of Batch 1 can now be found in-game and includes the following players:

This is the first batch made available by EA Sports, with two more batches being planned to drop during the event.

And for those who need a catch up on this year’s event, here’s what FIFA fans can expect over the coming weeks:

“For 24 hours on select days during the campaign, players will find a Player Pick pack available in their account upon login. Each Player Pick will showcase Loan versions of 2 FUTTIES Nominees. The player you select will receive your vote.

“The FUTTIES Nominee that receives the most votes will be released via Squad Building Challenge as an upgraded FUTTIES Winner item that week.

And that’s not all, with EA Sports deciding that each weekend will also include FUTTIES Favourite Player SBCs themed around a specific month and a popular FUT Player Item from that period in the cycle.

During FUTTIES, eligible players will have the opportunity to claim reward packs based on their engagement with FUT 21.

FIFA fans will have the entire duration of FUTTIES to login to FUT and claim their first reward packs if they’ve qualified to receive them.

A message from EA Sports adds: “There will be 2 additional opportunities to earn rewards based on how many times you login over the course of the FUT 21 FUTTIES campaign.

Certain makes of the AstraZeneca vaccine are not recognised by some countries, meaning travellers who are required to be fully vaccinated can not travel to countries that have such travel rules in place. This is because some batches are yet to be approved by the European Medicines Agency, despite being chemically identical to batches of the vaccine made elsewhere in the word.

Steve and Glenda Hardy, 64 and 63, were turned back at Manchester Airport at 3.30am on Friday when they tried to board a flight to Malta.

The couple were denied their place on the flight due to being recipients of the AstraZeneca vaccine – specifically doses that were manufactured in India.

The vaccine batch numbers on their NHS apps were checked by TUI and the couple were told they could not board the flight as Maltese authorities did not recognise the jab.

The ‘ban; meant the couple were unable to see their son, who lives in the Mediterranean country, having not being able to visit him for more than a year. 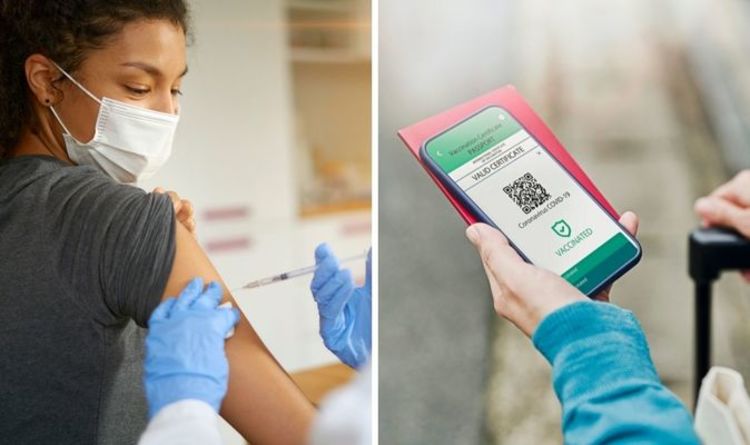 Millions of people were administered this batch and could be turned away at EU border crossings when the batch number of their vaccines is checked.

This news comes as millions of Brits prepare to go abroad this summer, particularly after July 19 when the Covid restrictions might finally be removed.

However, if you’ve had a jab from the batch of AstraZeneca made in India, you might not be able to get into Europe.

This version of AstraZeneca hasn’t been approved in Europe yet, but up to five million doses of it have been administered in the UK and this will be identifiable on the recipients’ vaccine cards and Covid travel pass on the NHS app.