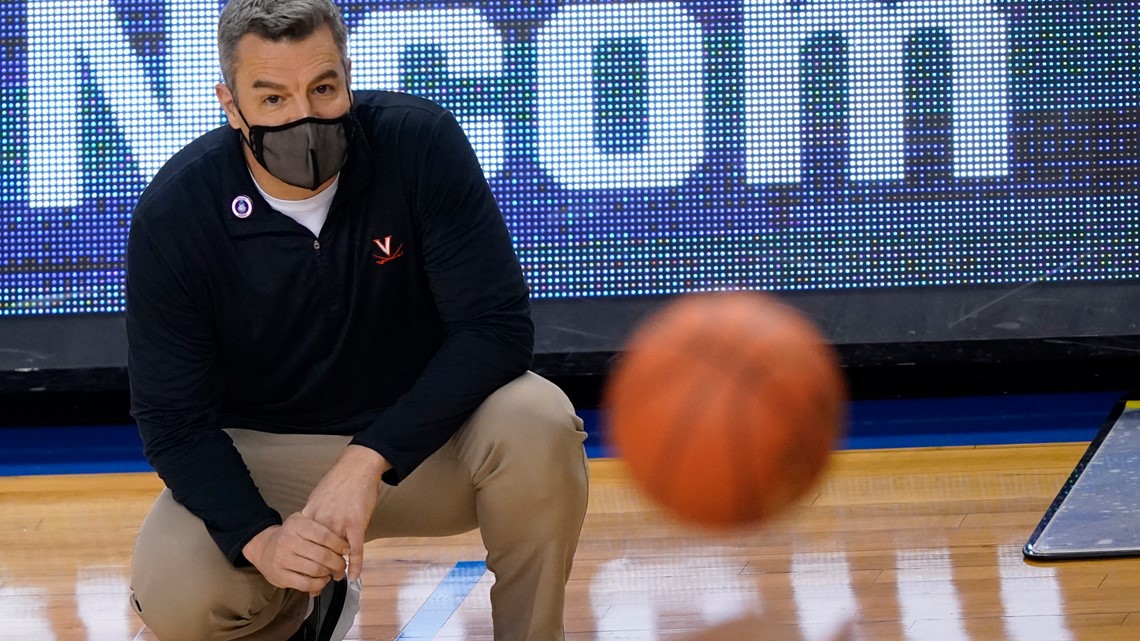 It’s unclear what the COVID-19 issues mean for No. 16 Virginia and No. 11 Kansas going forward, with Selection Sunday just days away.

For the second time in many days, major conferences have called off tournament games due to COVID-19 concerns — this time involving No. 11 Kansas and No. 16 Virginia.

The Jayhawks withdrew from the Big 12 Tournament on Friday after a positive COVID-19 test within the program, which led to the cancellation of their semifinal matchup with No. 13 Texas.
And earlier Friday, the Atlantic Coast Conference canceled the league’s semifinal game between the top-seeded Cavaliers and Georgia Tech due to a positive test, quarantining and contact tracing within the Cavaliers program. The announcement came less than 12 hours before the Yellow Jackets and Cavaliers were set to play the first of two semifinal games.
That means Georgia Tech will advance to Saturday’s championship game to face the winner of the North Carolina-Florida State matchup. And in the Big 12, the Longhorns moved on to the title game to face the Oklahoma State-Baylor winner.
It is unclear what the COVID-19 issues mean for the Virginia and Kansas going forward, though the Jayhawks released a statement that they would continue preparing for the NCAA Tournament.
Cavaliers coach Tony Bennett described the outcome of the tests as a “gut punch.”
“I’m hurting for our players, especially our seniors,” Bennett said in a statement. “I told our young men they have every reason to be disappointed, but it is still very important how they choose to respond. We are exhausting all options to participate in the NCAA Tournament.”
Virginia athletic director Carla Williams said in the statement the school was “in communication with the appropriate officials regarding our participation” in the NCAA Tournament, which starts Thursday.
The cancellations came a day after Duke withdrew from the ACC Tournament and ended its season amid its own positive test before facing the 15th-ranked Seminoles in the quarterfinals.
The Jayhawks learned earlier this week they would be without center David McCormack and backup forward Tristan Enaruna due to COVID-19 protocols. They beat No. 25 Oklahoma 69-62 in the quarterfinals without them, and had gone the entire season without an outbreak that forced a cancellation or postponement.
“Obviously we are disappointed and our players are disappointed that they can’t continue to compete for the Big 12 championship,” coach Bill Self said in a statement. “While we have been fortunate to avoid this throughout the season, there are daily risks with this virus that everybody participating is trying to avoid.
“We have followed the daily testing and additional protocols that have been setup for us, unfortunately we caught a bad break at the wrong time. I look forward to preparing my team in probably a unique way for next week’s NCAA Tournament.”
NCAA spokeswoman Stacey Osburn declined to comment Friday on the Virginia and Kansas cancellations.
RELATED: Indiana AG warns of ticket scams heading into March Madness
RELATED: March Madness 2021: Fun facts to get ready for tournament tip-off
RELATED: Duke pulls out of ACC Tournament, NCAA tourney streak ends
Georgia Tech coach Josh Pastner said on a Zoom call with reporters that the ACC should not cancel the rest of the tournament, even though the three teams left are already almost certain to be invited to the NCAA Tournament.
“We want to go win that game and put our name in the record book,” Pastner said, adding that he hopes the Cavaliers also get to compete next week after winning the last NCAA Tournament held in 2019.
“They’re the defending national champions. They’re our league champions,” he said.
ACC Commissioner Jim Phillips said in a statement that he was “heartbroken” for the student-athletes, coaches and support staff at Duke and Virginia and that the league will follow the lead of “our medical personnel.”
The NCAA Tournament will be held entirely in the state of Indiana to create what NCAA senior vice president of basketball Dan Gavitt has called a “controlled environment” instead of a bubble.
The tournament protocols include requiring each member of a team’s travel party to complete seven negative COVID-19 tests before leaving for Indianapolis. Gavitt has said a team can continue to play if it has five players available through those safety protocols.
“This whole year has been a lot different for everyone with the testing protocols, socially distancing, wearing masks, making sure you’re not seeing people outside of your bubble really,” Virginia guard Sam Hauser said after Thursday’s win against Syracuse on a last-second shot.
“Pretty proud of our guys. We were very disciplined throughout the year and continue to be, especially this time of the year when if you get a COVID bug like that, it could end your season. … We’re just going to continue to take the right protocols, and we should be all right.”
AP Sports Writer Hank Kurz Jr., in Virginia; and AP Basketball Writer Dave Skretta in Kansas City, Missouri; contributed to this report.