Ole Gunnar Solskjaer has been told he is doing the right thing by holding new signing Amad back from the regular first-team spotlight at Old Trafford.

The 18-year-old winger has featured just four times for United since joining the club in January – each time as a substitute – but has impressed in the brief time he has had on the field.

His goal off the bench against AC Milan last month looked to be the gateway to his first start, though his only outing since has been six minutes in the FA Cup quarter-final defeat to Leicester.

However, Amad could well be in contention to face Granada in the second leg of the Europa League quarter-final on Thursday, and ex-United star Lee Sharpe feels the youngster’s gradual introduction has been the best way to get him up to speed.

Speaking to the MEN , Sharpe said: “I think he’s got huge ability. A very young lad, and he looks quite tiny to be fair, so I’d be a little bit concerned with the physicality of the Premier League with him first game in.

“But I think given time around training and the first team I think he’ll be another good option. I haven’t seen a lot of him, but I know he’s got loads of ability, goes past people and scores goals.

“A training session is pretty much like a matchday, so he’ll be getting kicked and shoved around a little bit, so he’ll have to learn to stand up for himself and look after himself, so the manager will know that and he’ll know that.

“I’m sure it won’t be long before he gets his chance. To join a team like United is a big ask, but I’m sure he’s getting well looked after by the manager and the staff.”

Prior to completing his transfer, Amad had only made five senior appearances in his career at former club Atalanta, totalling little over an hours’ worth of actual game time.

But United clearly have high hopes for the teenager, seeings as they have committed to spending what could eventually be £37million on him.

Asked whether Amad is any closer to starting for United, Solskjaer said at a press conference last week: “Yeah of course he is. He’s getting more and more used to our expectations and standards and the training, the level and intensity in the games over here.

“So he did well when he played 45 minutes against Milan. Definitely a bright start and we’re gradually going to see him play more and more. 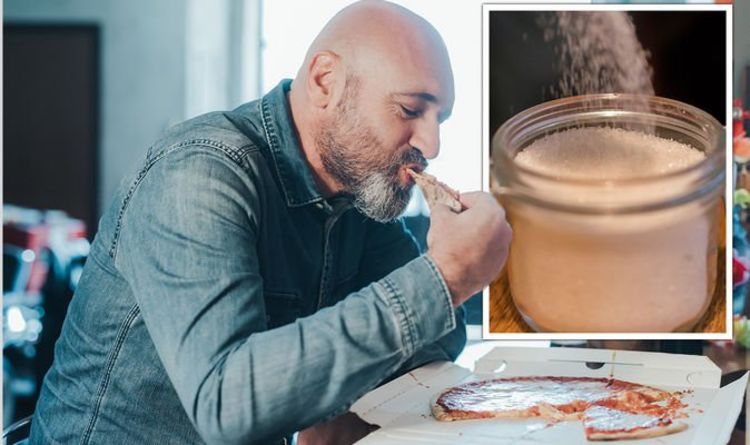 Sugar can be found in fruit, vegetables and dairy, let alone the sugar added to ready-to-eat pizzas, cookies and condiments. Eradicating sugar from the diet would be a tricky task, but would it be good for you? “Sugar doesn’t directly cause type 2 diabetes,” revealed Diabetes UK – a charity dedicated to informing the public about the health condition. What can lead to type 2 diabetes is being overweight, which happens when you take in more calories than your body needs.

“Sugary food and drinks contain a lot of calories,” explained the charity – and there’s a difference between natural sugar and “free sugar”.

The former is naturally found in fruit, vegetables and dairy products while the latter includes:

If consuming too much sugar is making you put on weight, then you might be at risk of type 2 diabetes.

“The maximum recommended daily amount of sugar is 30g for adults – which works out at just seven teaspoons a day,” the charity clarified.

This can be achieved by making some simple dietary swaps throughout the day.

Most people in the UK aren’t eating the recommended five fruit and veg a day, so it’s important not to cut out these natural sugars.

As for drinks, if you must have a dash of sugar in your tea or coffee, opt for an artificial sweetener instead.

Am I at risk of type 2 diabetes?

A person’s risk of type 2 diabetes increases if they’re carrying extra weight around their belly.

Another risk factor is if you have high blood pressure; older age is also risky, especially if you’re over 40.

You’re up to six times more likely to get the condition if you have a parent, brother, sister or child with diabetes.

The best way to prevent type 2 diabetes is to eat a healthy diet, exercise more, and lose weight if needs be. 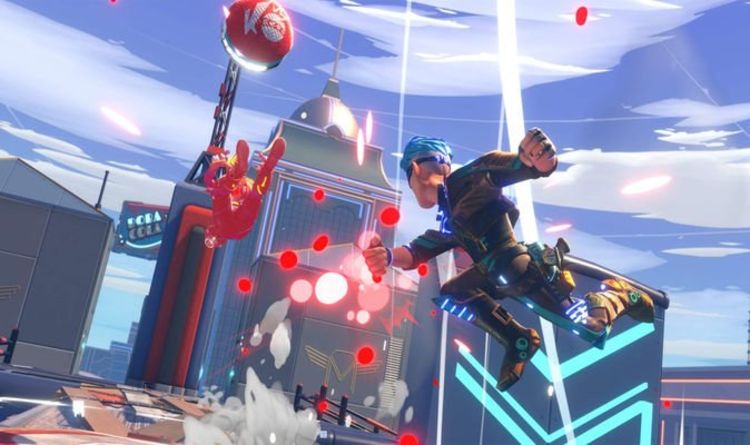 Knockout City is ramping up with a new content offering before its May 2021 release date.

Not only will this weekend boast a Knockout City beta across PS4, Xbox One and PC, but it will also include crossplay.

That means you can play with your friend no matter what platform they are using, and the best part is that it will all be free.

Gamers can already preload the Knockout City open beta, meaning they can be fully prepared for its start time on release day.

As with all betas, there will only be a small slice of content available to play, which will be disappearing at the end of the weekend.

The good news is that EA is planning to rotate in new content depending on what day you decide to drop in.

Different playlist will be going live, while EA will also be adding Sniper Ball to the mix of Special Balls, so you can lock onto enemies from far across the map.

New maps have also been confirmed, with Back Alley Brawl now in the rotation, with these other locations also confirmed:

WHEN DOES THE KNOCKOUT CITY BETA START?

The Knockout City Beta has a scheduled start time of 2pm BST on Friday, April 2, 2021. EA is using the same launch schedule across all platforms.

And if you’re playing in the United States, the Knockout action starts at 9am EST (that’s 6 a.m. PT) on the same day.

As mentioned above, different content will be going live during the Knockout City Beta, with EA confirming this playlist rotation during the weekend’s testing period:

And based on the times shared above, the Knockout City Open Beta is expected to end at around 2am BST, on April 5.

Some gamers on PS4 have noticed that they have started to download something called loremipsum27, instead of Knockout City.

For anyone concerned, EA has explained why this is happening, revealing that this a placeholder that has been accidentally left in place, and that the name will change back to Knockout City after you have completed the download.

A message from the Knockout City Support team explains: “If you’re brawling on PlayStation, you might see a placeholder icon/title as you download. This will flip over to the correct icon/title when the download is finished.

“Fun fact: This is the icon for Viper, the custom game engine that Velan Studios made for developing KO City!” 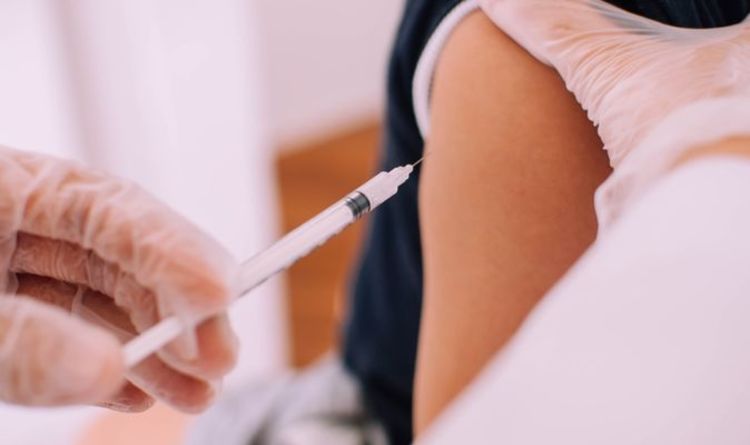 The UK’s coronavirus vaccination programme has been a monumental success, with more than half of all UK adults now the recipient of at least one dose of a coronavirus vaccine. But even though vaccines save lives and will ultimately help defeat the coronavirus pandemic, it can still cause uncomfortable side effects in some.
Many have reported side effects from getting their coronavirus vaccine, varying from pain in the arm to short fevers and other signs of mild illness.

Experts have previously said it’s ‘normal’ to feel unwell after getting one of the two Covid jabs being rolled out in the UK.

Side effects from the jabs currently being administered are ‘very common’ according to official guidance.

But some are lucky and don’t have any side effects from the vaccine.

But why do vaccines cause side effects – especially when the vaccines themselves do not contain live versions of the virus?

Professor Martin Michaelis and Dr Mark Wass from the University of Kent explain to Express.co.uk: “Although this may feel like the real disease, it is actually the response of the immune system to the vaccine.”

None of the vaccines currently available around the world contain the live virus – so cannot give you Covid-19.

They continued: “They use different strategies to present just parts of the virus to the immune system and they do not cause an infectious disease.

The experts explain: “Notably, vaccine side effects may also be caused by the ‘nocebo effect’, a polarised alternative of the famous ‘placebo effect'”.

“Whilst the placebo effect is associated with clinical improvements seemingly caused by psychological effort from the patient, they can also induce negative responses, the ‘nocebo effect’.”

“Negative responses are known to have resulted in the discontinuation of therapies in up to 25 percent of patients in placebo arms of clinical trials.

“Sometimes, side effects are higher in the placebo group than in the group receiving the active treatment.

“Similar levels of negative responses are reported in the treatment and placebo arms of COVID-19 vaccine trials.

“So, for some vaccinated individuals, the knowledge that they have been vaccinated may be sufficient to drive side effects.

“Ultimately, side effects associated with COVID-19 vaccinations are not a sign of the disease.

“COVID-19 vaccines are not capable of infecting anyone with SARS-CoV-2, the coronavirus causing COVID-19.

“Negative results are likely caused by the immune response to the vaccine, or the knowledge that we have been vaccinated acting as a ‘nocebo’.” 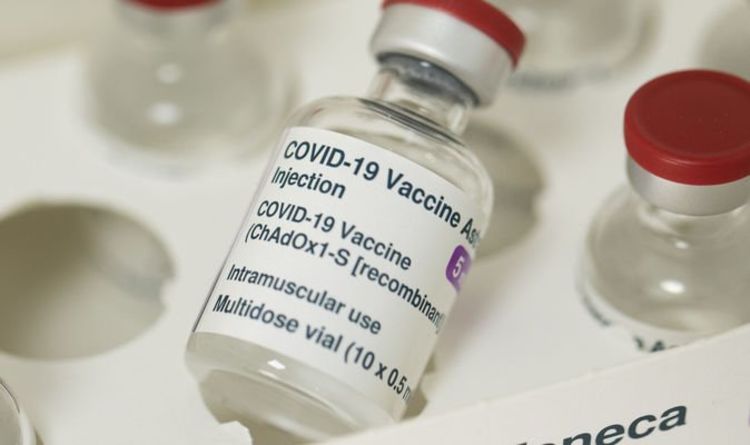 The UK’s AstraZeneca vaccine has been approved by both the European Medicines Agency and the World Health Organisation, based on a global clinical program involving 23,000 participants. The company said at the time: “All of these evaluations have concluded that the AstraZeneca COVID-19 vaccine is safe and effective.” But this week, Denmark and Norway suspended the use of the jab over fears it could be linked to blood clots.
The decision came after a number of patients developed clots after having the vaccine, including a 50-year-old man in Italy who died after developing deep vein thrombosis (DVT).

One 49-year-old woman in Austria died from “severe coagulation disorders”, and a pulmonary embolism put another in the hospital.

Health authorities have now launched an investigation into the reports and vaccine.

The suspension marks another setback for the European vaccination rollout that is only now beginning to stutter to life after a delayed start.

READ MORE: Long covid symptoms: Insomnia could be a lingering side effect

“The vaccine’s benefits continue to outweigh its risks and the vaccine can continue to be administered while investigation of cases of thromboembolic events is ongoing.”

The agency added fears may have come from one particular batch but ruled potential defects “unlikely”.

The EMA added: “Batch ABV5300 was delivered to 17 EU countries1 and comprises 1 million doses of the vaccine.”

“Some EU countries have also subsequently suspended this batch as a precautionary measure, while a full investigation is ongoing.

“Although a quality defect is considered unlikely at this stage, the batch quality is being investigated.”

The UK became the first country to approve the AstraZeneca jab, developed by researchers at Oxford University, earlier this year.

DON’T MISS
Can aspirin reduce your risk of catching coronavirus? Study results – ANALYSIS
SEISS grant 4: When will the next self-employed grant be available? – EXPLAINER
Covid vaccine data: Good news! More than a THIRD have had jab – MAP

In a statement released today, AstraZeneca said it found no increased risk of blood clotting.

The firm said: “An analysis of our safety data of more than 10 million records has shown no evidence of an increased risk of pulmonary embolism or deep vein thrombosis in any defined age group, gender, batch or in any particular country with COVID-19 vaccine AstraZeneca.

“In fact, the observed number of these types of events are significantly lower in those vaccinated than what would be expected among the general population.”

AstraZeneca added incidence of clotting-related disorders was lower in the people they tested compared to the general populace.

The committee will assess the batch and any potential “thromboembolic events” associated with it.