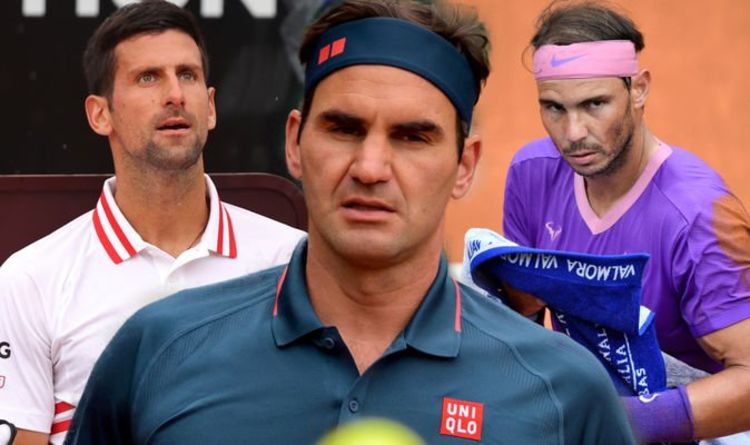 Roger Federer admits he “knows” he will not win the French Open next month after crashing out of the Geneva Open in his first match this week. Federer lost 6-4, 4-6, 6-4 to Pablo Andujar in only his third match on the 2021 ATP Tour.
Federer returned to the court for the first time in over 12 months at the Qatar Open in March and despite beating Dan Evans, lost in his second match to Nikoloz Basilashvili.

The 20-time Grand Slam champion’s second comeback tournament saw him surprised by Andujar despite being the top seed in his homeland.

Federer, who underwent two knee surgeries during his year out, still plans to compete at the French Open but admits he has no chance of rivalling the likes of Rafael Nadal and Novak Djokovic in Paris.

The 39-year-old, who turns 40 in August, is focused on being back at his best for the grass-court season.

And while his return to Roland Garros on May 30 will be the first time he plays on the red stuff in the French capital since 2019, Federer says he’s not even considering the possibility of winning the Grand Slam.

Federer said: “I think when you played so little, and you know where your level is at, and I think you saw that today, how can I think of winning the French Open?

“I’m just realistic, and I know I will not win the French, and whoever thought I would or could go all the way in Paris is wrong.

“Of course, crazier things might have happened, but I’m not so sure in the last 50 years at the French Open, somebody just rocked up at 40-year-old, being out for a year and a half, and just go on to just win everything straight.”

Nadal is the strong favourite for the French Open again this year as a 13-time Roland Garros champion.

His record at the tournament is a phenomenal 100-2 and he has not been beaten on the court there since losing to Djokovic in the 2015 quarter-finals.

The Serbian world No 1 is the strongest rival to Nadal but was beaten by the Spaniard in the Italian Open final in Rome last Sunday.

Federer will meanwhile play in Halle at the Noventi Open from June 14 to 20, where he is a 10-time titlist.

Wimbledon then begins a week later on June 28 where Federer stands his best chance of winning a 21st Slam, having been triumphant at SW17 a record eight times.

He added after losing to Andujar: “When I walk out of a match like today, I feel like, ‘My God, I could play so much better.’

“It feels strange, and it’s disappointing, but at the same time, this is the process I need to go through, and that’s why I can’t get too down on myself, and I need to go back to the drawing board.”

Earlier in the week before the Geneva Open, Federer had said: “Once I get healthy and matches under my belt, that will increase my confidence. I think then I’ll be a part of the top tier.

“If you want to be in the top tier you need to play 50, 80 or 100 matches per season and that gets tougher as you get older.

“You would think that the game has improved again. For me, that’s going to be an extra challenge.

“Extra hard to find that level but one that I guess that I knew from the get go [that] it was never going to be simple – regardless of if I was going to be out for three months or now almost a year-and-a-half.

“I was happy that the knee didn’t feel any different from hard to clay, and I expect the same in the switch from clay to grass.

“So far, the clay has been good for me and I hope it will be good for me for the grass. When you come back from an injury you are anyway in a different place than everyone else.

“The players are there, I’m here at the moment. That’s why I am excited about the comeback.

“That’s what my focus needs to be on and not about trying to be at the same level as Rafael [Nadal] and Novak [Djokovic] right now. That’s not why I am playing Geneva.” 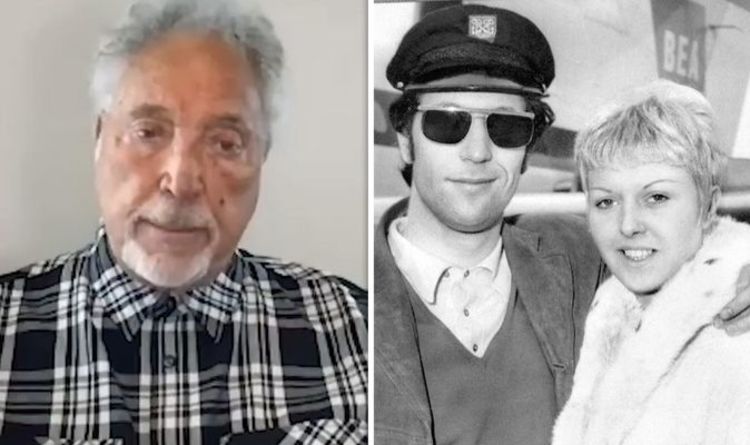 “She was always right,” he added while speaking on Today FM with Feral D’Arcy.

The 80-year-old trusted Linda’s opinion above all others, as he sometimes even questioned his own intuition when it came to making hits.

He continued: “She was right, so I use to play things to her and say, ‘Am I coming through here? Am I loud and clear? Am I being honest?’

“She would say, ‘I love that, or I don’t know why you’re doing that one’. You know like that. 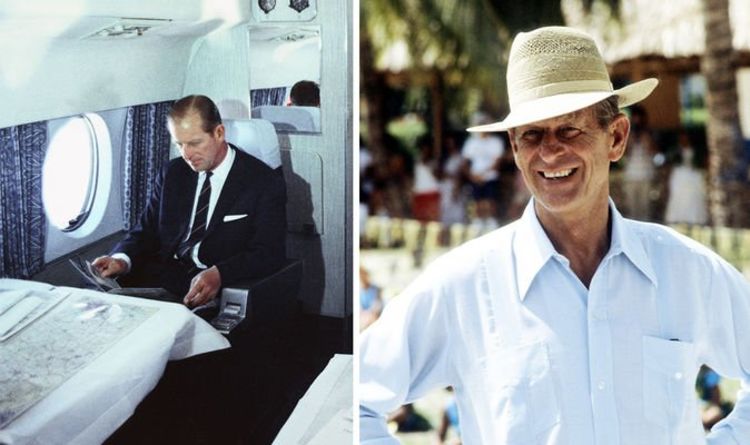 A former aide is said to have told Rayner: “Hosts spend more time worrying about the loo arrangements than anything else, down to what colour the towels should be and whether the loo roll is a suitable brand.”

Prince Charles, meanwhile, is alleged to travel with his own toilet seat.

Tom Bower’s book Rebel Prince: The Power, Passion and Defiance of Prince Charles made the assertion.

According to Bower, on one occasion, when visiting a friend in North-East England, Charles brought his own lavatory seat. 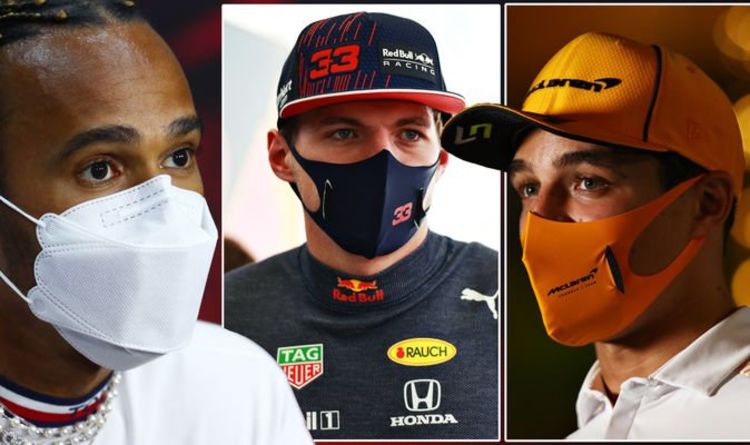 Lewis Hamilton admits Red Bull are ahead of Mercedes after day one of the Bahrain Grand Prix weekend and says it is “great” to see McLaren so close to the front of the field.
The first race of the season gets underway in the desert this Sunday and the first two practice sessions of the 2021 season took place on Friday.

Red Bull’s Max Verstappen topped the timesheets in both FP1 and FP2, while McLaren’s Lando Norris was second in the evening session after third in the first.

Mercedes’ Valtteri Bottas went second quickest in the first session but was down in fifth under the lights, while Hamilton went fourth and third.

The Briton found himself 0.235s back on pace-setter Verstappen in the second to fuel hopes that Red Bull can truly take the championship fight to world champions Mercedes this year.

The Dutchman was also quickest in pre-season testing at the same circuit, when Mercedes endured a litany of problems.

But Hamilton is confident that the Brackley-based outfit, winners of the last seven straight Drivers’ and Constructors’ Championships, are making progress.

However the seven-time world champion admits Red Bull have the early edge going into FP3 and qualifying on Saturday, and insists he’s delighted to see former team McLaren – without a title since Hamilton’s 2008 triumph – enjoying such fine pace.

Speaking to Sky Sports F1, Hamilton said: “We thought Red Bull would be as fast as they are if not faster. We know they’re leading at the moment.

“McLaren are looking great and it’s great to see them taking a step. It’ll be interesting to see how the long runs are.

On Mercedes’ struggles, the 36-year-old continued: “I definitely do [feel like we’ve taken steps forward]. Coming into this weekend we’d done a lot of work over the past week.

“I think we have taken a step forward but we still have more to do. With tyres and downforce reduced, the global balance has just shifted and it wasn’t where we wanted.

“This weekend it’s looking better but it’s still not perfect. We’re working as hard as we can. We’ve got great people working in the background.

“I know that we still have a hill to climb but we’re staying positive.

“And these tyres, the performance we’ve lost doesn’t help. We’ll work away at night and try and find a way.”

“Of course there’s still things to look into, tyre-wise as well, and a bit of balance tuning. Overall I’m pretty happy.

“Still tomorrow is again a different day. Even more windy, which with these cars is quite tricky. We’ll have to try and be on it. But a good start to the weekend.”

Asked if McLaren could be greater challengers to Red Bull than Mercedes, the Dutchman added: “I don’t think so. I still expect Mercedes to be the strongest Mercedes-powered car.” 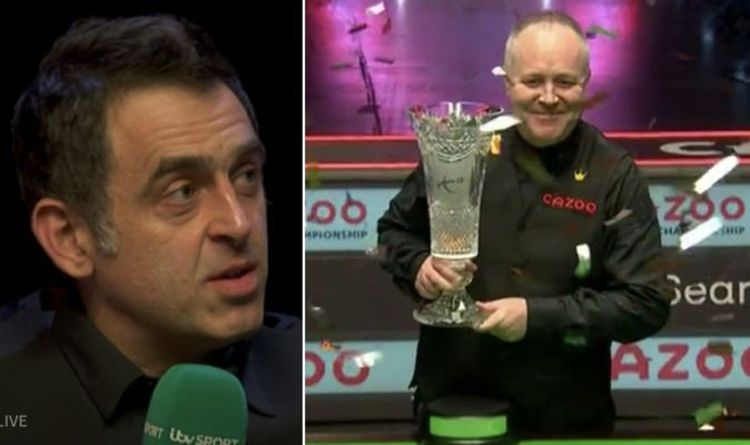 “I’ve said it there’s nobody in the game who has got more respect than I’ve got for Ronnie. The best ever.

“So for me to beat the best ever tonight, it’s a brilliant feather in my cap. Brilliant. It’s the best week I’ve ever had.

“I’ve won world titles and different tournaments but for the whole week, the way I’ve felt, the calibre of players I’ve come up against, I’ve managed to win quite convincingly.

“It’s not really like me to do that. Now normally I’d be scrapping it out, final frame deciders and the like.

Despite his emphatic loss, O’Sullivan did at least manage a seven-minute break of 144 – the highest of the tournament to pocket £10,000, denying Barry Hawkins the bonus prize.