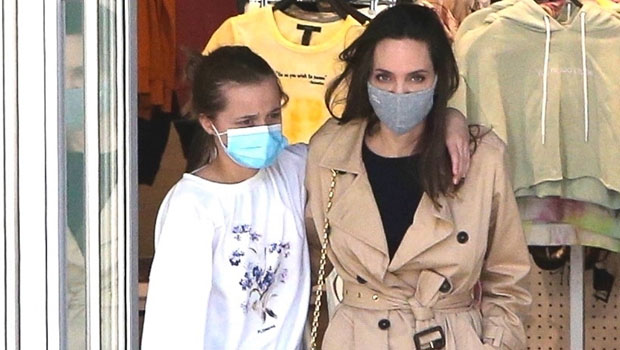 The close bond between Angelina Jolie and her daughter, Vivienne Jolie-Pitt, was apparent in this sweet photo of their shopping outing in Hollywood on March 29.

Angelina Jolie[1] and Vivienne Jolie-Pitt[2] have two things in common, besides their last name: a love for shopping and one another! The 45-year-old Maleficent star and her 12-year-old daughter were seen on another shopping excursion, this time in Hollywood, on March 29. As they left a Forever 21 store, they were seen with their arms sweetly wrapped around one another in a half-embrace.

Angelina opted for a business-casual ensemble for the mother-daughter outing: a cinch-tie trench coat and black slide-on sandals[3]. Meanwhile, her mini-me opted for a trendy oversized sweater with a dainty floral graphic and athletic sneakers. Vivienne was nearly as tall as her famous mother in the photo!

Angelina and Vivienne really do love to shop together. Just three days before this outing, they were seen leaving a fabric store[4]. Angelina wore a similar longline coat that time (beige, minus the tie) while Vivienne also rocked a sporty streetwear look for the outing.

As you can see, Angelina is hanging out with her kids per usual amid a custody battle playing out with her estranged husband Brad Pitt[5]. Angelina accused her 57-year-old ex, whom she filed for divorce from in Aug. 2016, of domestic violence in court documents[6] filed on March 12. She also claimed to have “proof and authority” to back up this allegation; AKA, potential “testimony” from her children (Vivienne, in addition to her five other minor children Pax, 17, Zahara, 16, Shiloh, 14, and Knox, 12). Angelina and Brad’s eldest child, Max, is 19 years old and therefore a legal adult — he is currently studying in South Korea.
This development in Angelina and Brad’s years-long custody drama[7] happened a few months after Brad requested full 50/50 custody of the children in Oct. 2020. This was a shakeup to their prior temporary agreement, which was reported in Nov. 2018. Brad had reportedly been awarded less than 50 percent of custody, and would “see an increase in his custodial time with the kids,” The Blast[8] reported at the time.