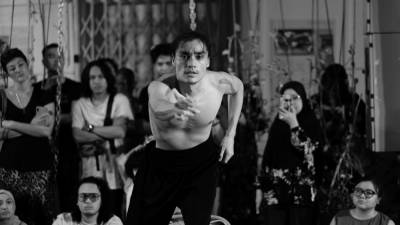 BEING an actor was not something Aniq Durar aimed for when he was young. He wanted to be a pilot, but that dream was quickly thrown out of the window because he was wearing glasses.

He almost majored in Civil Engineering, but he didn’t think he was great at physics.

He shares: “I didn’t really have a clue on what to do after high school, which is normal; I think the majority of teenagers have faced the same issue, it’s completely valid. I just went with the flow.”

However, performance arts have always been on the periphery. As an expressive child, Aniq took up cultural dances such as Ngajat and Alu-alu, and joined a musical when he was 17.

“I think the musical planted a seed in me which later would come to fruition in university and later on in my career,” he shares.

“I took part in a student theatre production at Monash University in Melbourne, Australia while I was studying for my business degree in Economics & Ancient Cultures Major. Then I went back home in 2016 and I worked as a museum professional for two years at the Sarawak Museum Campus Project alongside Jabatan Muzium Sarawak.

“I wasn’t doing theatre in those two years, and I started feeling that something was missing. I loved working at the museum, but I had to pick a path to be an actor as I felt I needed to.”

To be reminded again of how acting made him feel, and that the stage was once his space to freely express, Aniq devised a street theatre performance titled River for the What About Kuching Festival in 2018.

“Life is funny, it surprises you with different paths and you just gotta trust your gut, take a leap of faith and trust that everything will be alright. As long as you take action and not passively flown with the currents of time or the world,” he adds.

What are some stories that you’re particularly interested in and love to explore?

“If it is devised theatre, I’m very interested in highlighting marginalised stories, especially Sarawakian native stories [especially] contemporary takes on identity and culture, and who we are as people.

“Traditional media usually does not pay much attention or give East Malaysians platforms to express themselves, or the space to be seen, so here I am doing it in theatre.

“If it’s non-devised scripted theatre, I love character work. I absolutely love Shakespeare, the language is just beautiful and the stories are timeless.”

“As cheesy as this sounds, my family and my friends. Sometimes it’s hard to give yourself space to dream without taking into account what is expected of you, but they’ve always been supportive towards me and pushed me to dream far.

“My dad was a sea captain. So, apart from being a stoic, wise man of the sea, he is a man who persevered through things, a very easygoing man who doesn’t take things too seriously.

“My mother allows me to be myself, being all goofy and silly, though her fiery passion has definitely rubbed off on me.”

What are the differences between screen acting and stage acting?

“Acting is acting, at its core, it is the same. We project emotions, facial expression, body language and tone of voice to play a character.

“However, there’s a slight difference in the approach between screen and stage acting. I see stage acting as a train that has no stops, you keep the momentum going, and be as expressive as you can throughout the whole act.

“Screen acting however, is more subtle, like a bus that goes through stops. You need a right level of expression and when the director ends a scene during the production, you stop and resume acting in the next scene, and the cycle continues.”

So acting helps you to be in control of emotions?

“I think as a society we’re not allowed to express emotions that are deemed ‘bad’. Not that expressing emotions itself is bad, but certain emotions come off harsher than others.

“Emotions are emotions, there is no bad or good. Emotions help you process things and experiences. You don’t get angry for no reason, your emotions react to factors. That applies to sadness, happiness and jealousy. All emotions are valid.

“Theatre gives space, a safe space, to explore emotions more freely. I see theatre as a mirror to society, we give audiences something to take back, or relate to or reflect upon.

“Life can be constricting, which is tough when there is no space to express. So theatre or any artistic expression for that matter allows us to express things we normally wouldn’t be able to.”

Would you say that you have a different approach to acting than before?

“Definitely, acting is a skill, you get better over time with experiences. There is no perfect actor, although Meryl Streep and Viola Davis are such legends. But yes, over time you develop your own set of skills.

“Not all actors have the same skill sets, they find ways unique to them that benefit them more. Some may use their imagination, others prefer method acting. I like to look at it all, and see what works for me.”

I wonder what part of the process in acting brings you immense satisfaction?

“I look internally. On one show I will focus on one goal, that could be ‘having fun’, another day, I’d set my eyes on ‘making the audience laugh’ or ‘be as expressive as I can’.

“If all else fails, at the end of the day, we’re entertainers, we’re here to bring joy, shed tears or feel uncomfortable. And if the audience takes a little thing from the show that helps them in any way possible, I count that as successful.”