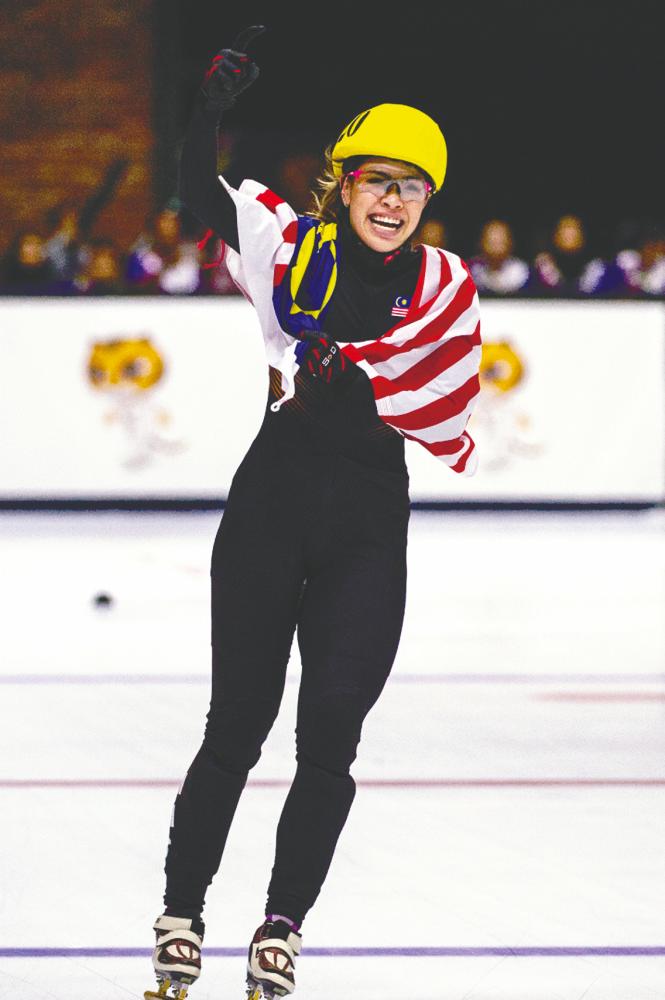 OUR interview took place with me located in Seremban, and Anja Chong all the way in Germany. Her dog Gigi tried to get into the conversation as well, but Chong managed to calm her down.

Chong, who is Malaysia’s top Short Track Speed skater, won three gold medals at the 2017 Kuala Lumpur SEA Games. Prior to that, she had also competed internationally as a figure skater.

Describing herself as a homebody, Chong said she had yet to reach the stage where she feels bored, despite being cooped up at home for days.

She also has her own retail and e-commerce company, which she founded before competing in the 2019 SEA Games in the Philippines.

At the moment she is undergoing rehabilitation. Prior to the most recent SEA Games – where she won gold in the women’s 3,000m short track speed relay team event and a bronze medal in the 5oom short track speed event – she suffered a ligament injury during training.

Recovery is taking time, and the lockdown in Germany has given Chong the opportunity to take things easy and concentrate on her business more.

Chong is also one of the Malaysians listed on Forbes 30 Under 30 Asia 2020 list.

How old were you when you took up skating?

“When I was nine years old, I started figure skating. I actually went to a party and everyone there had skated before, except for me. At the time I was just a perfectionist. Everyone was so good at it and I wanted to be better. I was the only one holding onto the railing and barrier.

“I asked my mum if I could have lessons during the school holidays. My mum said okay, but I had to get good grades for my exams and I would get these lessons as a reward.

“I guess you could say I got the skating bug and I did figure skating until I was 15 years old, and then moved to short track speed skating. I stopped for a while when I went to law school in 2016. Two weeks after my final exams I was training in South Korea for the 2017 SEA Games.”

How did the switch from figure skating to short track speed skating happen?

“There was a camp to introduce this sport to the Southeast Asian region. At that time I had taken a step away from figure skating because there was so much drama and politics in the sport. I stopped, did other sports in school and didn’t think much of it.

“So when they were introducing short track, my mum said I should do it. And so, I went to the camp and fell in love with it.

“I love short track because it is so much about speed, about adrenaline, the tactics and strategy involved. I really like all the dynamics involved. With figure skating you are doing your overall best, but with speed skating you are directly competing against people.

How important is camaraderie in sports?

“When you are training 24/7 for sports, it is important to have colleagues who are supporting you. Even when I was a rookie, I had people come and take me under their wing, and who taught me everything because I did not know anything about being a full time athlete.”

Before your injury, was your ultimate goal to take part in the Winter Olympics?

“Before the 2017 SEA Games, the Sochi Winter Olympics was my goal. Unfortunately there was a lot of politics from the association and where I was training. It was a very intense environment.

“I then realised [how much] I loved the sport. I needed to take that time
away to remember what was important to me. So I went back to train for the 2019 SEA Games.

“My goal was not to win a gold medal, which is something that might surprise you. My goal was to just go back to the sport and enjoy it.”

How do you feel about being selected by Forbes 30 Under 30 Asia?

“When it was announced, everyone was congratulating me. What I learned from [the experience] is that if we often stop ourselves short, then we won’t be able to achieve anything.

“If you don’t put yourself forward, you will never know. If you don’t aim for your dreams, you will have a 100% chance of not getting it.”