Taking matters into his own hands 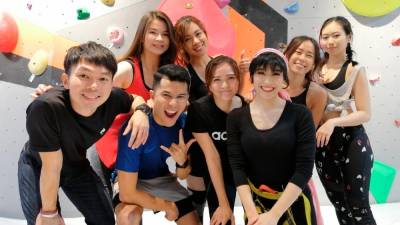 HIS journey began seven years ago on an extended work trip abroad. During that time Kae Vin Goh fell in love with a certain sport, but upon returning to his hometown, he found the facilities available to explore it locally were lacking.

“I started rock climbing in 2013 when I was in the States for work, my company sent me there for six months,” said Goh. “I was hanging out with this guy who is a really passionate and avid rock climber. He brought me to try out rock climbing; first to a rock gym, and then to natural climbing sites called crags”.

The challenge and the sense of achievement that climbing gave him made Goh want to continue with the activity even after he came back to Malaysia.

He explains that like in any other sport, seeing oneself improving and constantly getting better became the driving force behind wanting to pursue rock climbing. However, unlike most sports, rock climbing introduces a sense of thrill.

“One of the things about rock climbing is it teaches you to overcome your fears and manage the risks. When you are 10 metres above the ground you have to stay calm and stay focused, so you do everything correctly and don’t put yourself in jeopardy,” said Goh.

“It gives you confidence. You would think it is a very dangerous and extreme sport. But, actually when you are doing it properly and you are trained and focused, you are safe. That is the element that is not present in all sports”.

However, when he came back to Penang, he could not find a single rock climbing gym. He was willing to wait, and wait he did. In the meantime, he became a triathlete.

“I enjoyed triathlon and competing with others. I felt that I wanted to do different things, instead of just running or cycling or swimming. If I can do all three, I mean, why not,” said Goh.

After four years of waiting for a rock climbing gym to open in Penang, he decided to take matters into his own hands and open one himself. With the help of a business partner, he opened a relatively small bouldering gym in 2017.

“A bouldering gym is like a rock climbing gym, but shorter. So the wall is about 4 metres and you have safety mats at the bottom so you don’t need the rope and harness. So when you fall down, you land on the mats,” explained Goh.

The overwhelming response surprised them both. There was a demand for a rock climbing gym in Penang.

Then an opportunity came knocking when IKEA Batu Kawan invited them to check out an unused space at their new centre and proposed the idea of opening a large rock climbing gym.

“They invited us to see if we would like to build a rock climbing gym there. It was a good plan. The ceiling of the space is about 12 metres high, and about 7,000 sq feet. So we opened Project Rock at IKEA Batu Kawan,” said Goh.

Project Rock is built on the concept of creating a rock climbing gym that is open to all, and in turn introduce the sport to the public. If you want to try it out, this is a safe place to do it.

“In a rock climbing gym, there are various handholds and footholds on the wall. Those handholds are colour coded, and there are certain routes. When you climb a route, you have to climb based on the colour. There is a starting and an ending.

“That is a climbing route, problem, puzzle, depending on how you call it. These routes are the main ingredients of a climbing gym. Routes start from very easy, to super difficult.

“In a climbing gym, we have a person called a route setter. The route setter will refresh part of the wall every week. He (or she) has to constantly come up with fun, interesting and challenging, and engaging routes,” said Goh.

He added that returning visitors are usually those who love to challenge themselves on a difficult route and upon completion, it gives them a great sense of achievement.

“Did you know that rock climbing will be an event for the very first time in the Tokyo Olympics?” said Goh.

“That shows that rock climbing has become mainstream, and is also gaining a lot of traction. A lot more people are doing it and there is a lot of participation.”

Elisabeth Stefaniak briefly dated Elvis and became his and his father, Vernon's, secretary. She lived with them at their family house in Bad Nauheim,...
Read more