Taylor Lewis: Boy, 5, with no legs and hands who has braved 84 ops 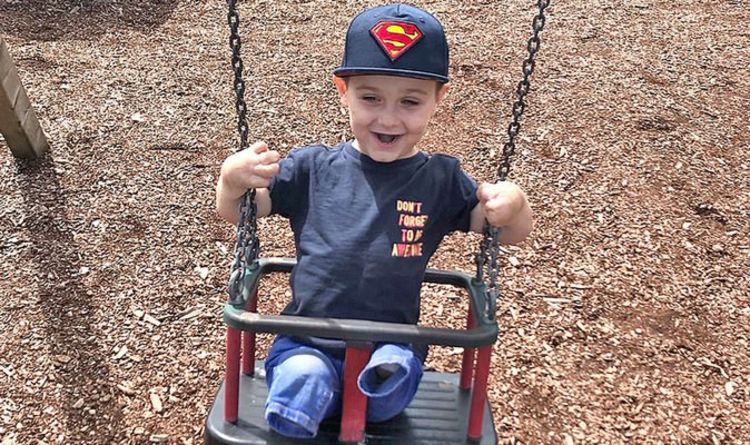 The smiling five year old lost his legs and hands following a vicious bout of meningitis and septicaemia. He has also endured 84 operations. But that doesn’t stop him from playing football, rugby and even skateboarding with his friends.

Taylor was eight months old when he started being sick in April 2015. Mum Terri Lewis, 26, said they went to hospital but were sent home.

She added: “I didn’t really know about meningitis. He was getting worse and then his face got a blue cheese-type rash so we called an ambulance.”

Within hours doctors confirmed he had meningococcal type W – a virulent strain of meningitis and septicaemia – and to prepare for the worst.

Taylor was put into a medically induced coma at Queen’s Medical Centre, Nottingham. Terri said: “His whole body was shutting down and his face and limbs were all turning black.”

Seventeen days later, Taylor pulled through. Now he has a pair of prosthetic limbs which he wears to race around his home and his hands have been surgically reconstructed to provide him with 10 pincer-style fingers, which will develop as the bone grows.

That means he can now hold a pen, a fork, grip a bottle with one hand, grab toys, and even manage that essential task beloved by five-year-old boys – pick his nose.

“We have Superman, Iron Man, Spider-Man and Bogeyman,” joked Terri. “But it’s incredible – because he hasn’t known anything different, he finds a way.”

Terri, who split from Taylor’s father before he fell ill, gave up work to become a full-time carer, but now gets some respite with Taylor going to school.

Taylor said: “School is fun. I’ve got lots of friends and I try to do everything that they all do. There’s nothing they do that I can’t.”

Mum and son live in an open-plan bungalow with disabled access in Ilkeston, Derbyshire.

Terri said: “It is incredible to think from that night in the hospital that we are here now with this incredible little boy who has such a zest for life. He really is my little superhero.”