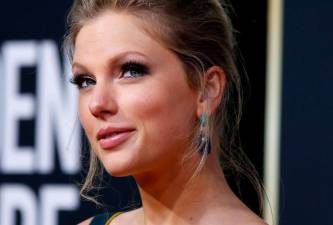 TAYLOR Swift, Jennifer Lopez and Oprah Winfrey have joined a global broadcast special telecast this weekend that will recognise the efforts of workers on the front lines of the coronavirus outbreak, organisers said on Tuesday.

The “One World: Together at Home” event, a combination of music, comedy and stories from doctors, nurses and grocery workers, also announced an additional six-hour streaming event that will include appearances by major sports stars, including British Formula One racing champion Lewis Hamilton, US women’s World Cup soccer player Megan Rapinoe, World Cup skier Lindsey Vonn and dozens of other singers, actors and social media influencers.

The April 18 streaming event will precede the two-hour show to be broadcast across multiple North American and international television networks on Saturday evening in the biggest effort so far to show solidarity with frontline workers.

All those taking part in the event, organised by the World Health Organisation (WHO) and advocacy group Global Citizen, will appear remotely due to social distancing and shutdowns aimed at curtailing the spread of the disease that has killed more than 124,000 people worldwide.

“Our hope for the special is that everyone will come away believing that we, as a shared humanity, can emerge from this moment forever grateful for the work of doctors, nurses, teachers, grocery store workers, and all those who are the backbone of our communities,” Hugh Evans, co-founder and chief executive of Global Citizen, said in a statement.

Lady Gaga announced the event last week but it has since expanded dramatically and now includes some of the biggest celebrities in the world, including Celine Dion, Billie Eilish, John Legend, Elton John, Paul McCartney, Chris Martin, Andrea Bocelli and Michael Buble.

While the special is not billed as a public fundraiser, it is also aimed at encouraging philanthropists and companies to dig into their pockets and contribute to the WHO’s Covid-19 Solidarity Response Fund. Gaga said last week that more than US$ 35 million had been raised from corporations.

“When we do air live on April 18, put your wallets away, your credit cards away, anything away that you need to and sit back and enjoy the show that you all very much deserve,” Gaga told a news conference last week. – Reuters

One World: Together at Home will air on April 19, 8am Malaysian time.