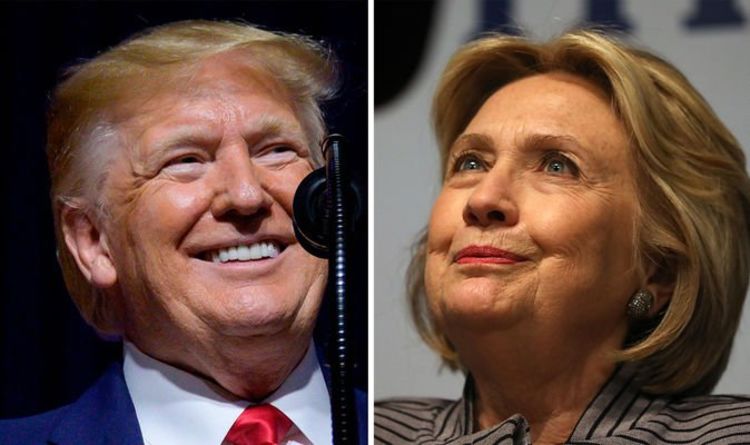 Mrs Clinton turned 72 on Saturday. On her 69th birthday, just 14 days before the 2016 Presidential election, she tweeted a photo of herself as a young girl. The caption attached to the image was: “Happy birthday to this future president.”

The video showed television coverage from CNN of the results.

The shot then cuts to cheering crowds.

A female reporter interjects to say Mrs Clinton was calling Trump to concede.

The clip ends with Trump giving a thumbs up, flanked by his Vice-President Mike Pence and his youngest son Barron Trump.

Each state in the US plus the District of Colombia has an electoral college, a body of electors mandated to award the states votes in the election.

Some have speculated he may poll better if he replaces Mr Pence as his running mate.

Commentators have suggested Nikki Haley, who was his ambassador to the UN and Governor of South Carolina would result in him fairing better.

Mrs Haley has dismissed the suggestion.

Trump is favourite to win the Republican nomination.

According to Oddschecker, he is favourite to beat his Democrat opponent.

Mrs Clinton is fifth favourite to become Democrat candidate again despite not running.

Mrs Clinton was previously a New York Senator and Secretary of State.