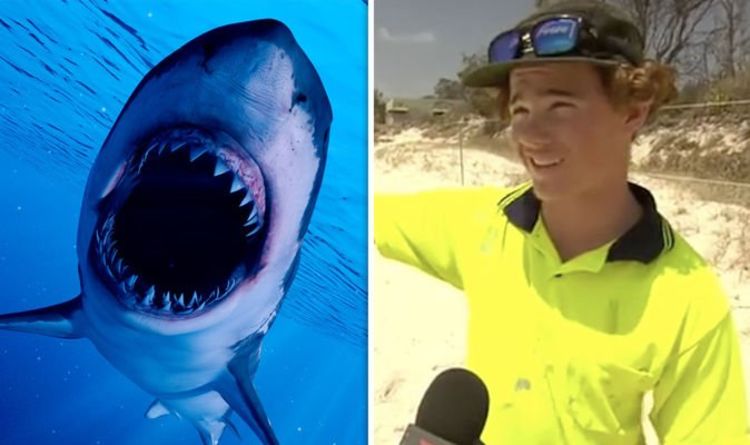 Riley Brown was surfing off Bribe Island on Queensland when he was suddenly knocked off his surfboard. Confused, the 17-year-old managed to paddle back to the shore before finding a huge chunk taken from the bottom of his board.

The bite, measuring 40cm, was inches away from potentially dismembering Mr Brown’s leg or arm, an event that would have likely ended in his death.

The attack happened on Thursday while the carpenter was enjoying the afternoon sun.

On being knocked off his board, Mr Brown yelled to his friend who was around 20 metres that he had “just got hit by something”.

Mr Brown then ran up the beach warning other surfers of the massive shark lurking in the water.

Talking to Australia’s 7News, Mr Brown said: “Something came up underneath me and smoked the bottom of my board.

“I got flipped off and got back on the board and told me mate who was like 20 metres away.

The teen explained that his friends initially thought he was lying about the attack.

It wasn’t until he flipped his board over and showed them the jagged sides and indentation that they realised Mr Brown had escaped with his life.

Shortly after the incident, the teen said he was keen to get back into the water despite the near-death experience.

A friend who regularly surfs with Mr Brown, Brad Highlands, said the teen was extremely lucky that he hadn’t been lying down on his board when the shark attacked.

He told the Courier Mail: “He’s very lucky. He’s so lucky it missed his legs.”

Though he was unable to tell what kind of shark had hit him due to the angle he was sitting, Mr Brown said it was unlike anything he had ever seen while in the water despite having surfed there all his life.

He said: “I’m sort of getting my head around to like, did that just happen.”

Mr Highland was quick to warn other surfers about the incident, posting in a local Bribie Island Facebook group page.

He wrote: “Riley’s shaken pretty bad but otherwise all is ok, stick to swimming in the pool for a few days could be the go.”

Despite the attack, the beach was not closed as the sighting was reported to life savers after patrol hours.

Earlier this month, a great white shark attacked a small fishing boat in waters around Spencer Gulf in Australia.

Film footage showed the shark stalking Arron Piekarski’s boat – the shark then jumped out of the water and violently aiming itself towards the boat.

On board the boat and with a water proof camera Mr Piekarksi can be heard half in awe, half fearful of the beast.

He said: “Look at the size of this sucker! “I would have gone closer but I was worried it was gonna hit the boat and drop my camera in the water.”

The shark lands a bite on the boat before disappearing into the waters below.