Tenet trailer: What happens in the Tenet BUMPER 7-minute teaser? 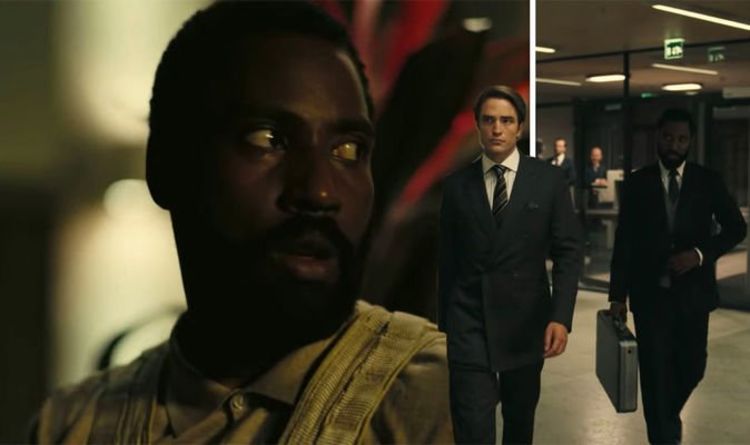 Tenet is expected to drop in cinemas on July 17, 2020, and fans are already desperate to see it. The action thriller is Nolan’s latest movie, starring Robert Pattinson and John David Washington. Some fans were lucky enough to see a seven-minute clip from the new film – but what happened in the new Tenet teaser?

As the action opened, the audience found themselves watching an orchestra tuning up in a large, concert hall in Eastern Europe.

Suddenly, a group of men who seemed to have been terrorists, ran in started shouting for the audience and orchestra to get down.

The gang were armed and had masks over their faces, but the camera was more concerned by a specific man who was watching the action from a box, who looked particularly nervous.

Soon enough, we are outside, as a whole swathe of black vans park up outside, seeming to be police.

As they are there, one of the drivers tells his officers to “wake up the Americans,” one of whom is John David Washington.

He and another character, who is also an American, quickly put Velcro images of the police insignia on their arms, so they can blend into the group as they run in.

Clearly, they are not police, and it quickly becomes clear their mission is separate.

They run into the concert hall, and find the police are putting a sleeping gas inside, in the hopes of forcing the terrorists to sleep, or at least the audience.

The audience fall to sleep, but the gang are already prepared, and most of them get their gas masks on in time.

Washington’s character runs quickly into the box and finds one man, who is being held there by a man who looks to be an army official.

Washington kills the official, and then speaks a code to the man in the box, who responds with the correct reply.

The pair then have a discussion about “making contact,” and it becomes quickly clear that Washington and his colleague are here to extract this man, who may have information they need.

As they sneak him out in police gear, they realise the police, or so they are supposedly, are trying to cover up the incident, and start putting explosives in the “cheap seats” of the audience in an attempt to kill any witnesses.

Things are obviously not what they seem at all, and Washington becomes focused on trying to save the civilians by grabbing the bombs, with his colleague, and throwing them up into the boxes while the civilians sleep.

One moment at this point, however, is particularly telling, as Washington looks down at a bullet hole in one of the seats, and it suddenly disappears, as if the chair is healing itself.

They all eventually escape, but on returning to his van, Washington is suddenly discovered as being a fake officer, and a gun is pointed into his face.

From here, the trailer is then played, which shows Washington trying to understand what is going on, alongside characters played by Elizabeth Debicki and Robert Pattinson.

In the trailer, Washington and Pattinson drive along a road to see a crashed car begin to “uncrash” itself, as it rolls back into a normal position.

This, linking with the gun hole in the seats, makes clear this film is more than just a thriller, and it will clearly involve time travel, as has also been teased by Nolan himself.

The trailer also reveals Kenneth Branagh, one of the characters, seems to be the villain of the piece, as he is seen trying to kill someone, who looks like Debicki, in his car as Washington watches on.

This movie will likely pose a huge number of questions – but at least now we can learn more about what to expect before the film arrives.