Terminator Dark Fate sequel: Three theories of where next film could go after THAT ending 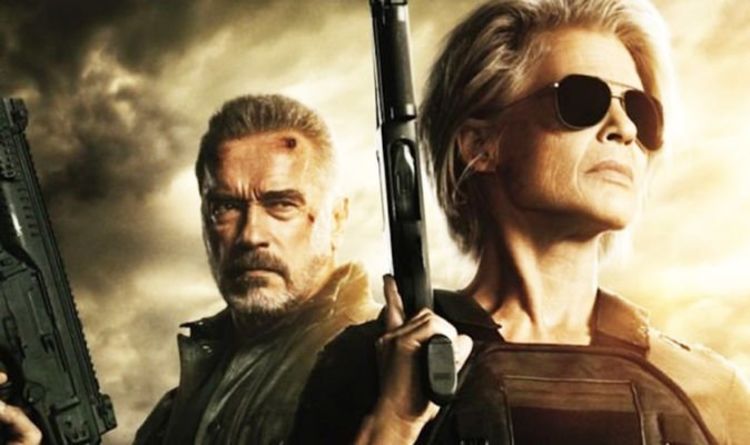 WARNING SPOILERS FOR TERMINATOR DARK FATE AHEAD. The latest Terminator movie was full of twists and turns and certainly leaves open the possibility of more sequels. The official sequel to Terminator 2: Judgement Day ended with Sarah Connor (Linda Hamilton) and Dani (Natalia Reyes) driving off together having defeated the Rev-9 (Gabriel Luna). However, in the process, the pair lost both Grace (Mackenzie Davis) and the aged T-800 (Arnold Schwarzenegger.)

We learnt that thanks to the new timeline initiated by Sarah preventing Judgement Day in 1997, it was Dani who became the leader of the human resistance instead of John Connor – taking on Legion over Skynet.

Grace had been sent back in time from the 2040s to protect Dani, who would raise her after the postponed Judgement Day in the future.

In the closing scene, Dani watched Grace as a child in a playground, before telling Sarah that she wasn’t going to let Grace be her saviour this time.

By the sounds of it, Dani has a mission to change the timeline again, just like Sarah did, to save Grace.

But perhaps the time travel will be more in line with Avengers Endgame in crossing multiple realities.

But the bigger question is how Arnie can return as the T-800 when once again the model he’s portraying perished.

The explanation for his aging had to be shoehorned for Terminator Dark Fate, as it was for Terminator Genisys, so how it will be again is anyone’s guess.

Nevertheless, there could be another aged T-800 out there in retirement just like Dark Fate’s Carl.

Of course, another option for a sequel could see Arnie play the man the T-800 was based on.

This is an idea that Cameron has previously teased to fans in Dark Fate’s early days, although it might not be able to work now that Skynet has been erased from the current timeline.

In a Q&A two years ago with The Arnold Fans website, Cameron said: “Yeah, you got to ask yourself, ‘Why did they make these characters look and sound like Arnold?’ There has to be a reason. So yeah, it has flashed through my mind that there has to have been a prototype.

“Now, the question is, did that person have some sort of meaning to Skynet on why they chose that one [Arnold]?

“Or was it like a whole rack of Terminators and the one that happened to be the Arnold model just happened to be closest to the door going out to the time displacement centre and all the others looked different? I’ve asked myself these questions but it’s never been resolved…so stay tuned!”

Terminator Dark Fate is out now in UK cinemas.