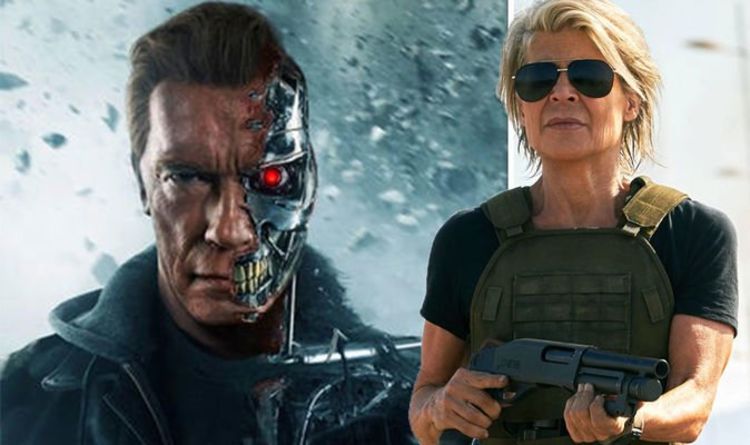 The actress chatted about what’s to come for her character and the gruelling regime of returning to the movies, and even revealed her shape had changed so much in the year before filming that the production were forced to do some serious work.

It turns out, the prop and wardrobe department had to collaborate to build Linda a new bottom, as it needed to be “bigger” for the film.

The star laughed about the memory, but was also quite clearly puzzled by the move.

She explained: ““There was [a lot of training]. Time off was military training, Spanish lessons, scuba, we had to do it all. There was never a moment we weren’t learning something or acting.

“I had to work pretty hard,” the Sarah Connor star went on. “I had gotten a bit chunky and there were no carbs in my life for a year.

“I got so lean, when I arrived they had to actually build me a butt. They added bottom, something you don’t ever see coming.

“Who wants more bottom? But apparently…” Pausing, the actress suddenly declared: “I shouldn’t give my secrets away!”

Linda also joked she’s been threatening to fake her own death so she wouldn’t have to do another Terminator film because the experience was so intense.

Co-star Mackenzie Davis, who was also sat on the sofa opposite host Lorraine Kelly, laughed: “It was so hard making this god damn movie.”

“I may have to fake my own death so I don’t have to appear in the next one, if there is on,” Linda continued. “It really was hard – it was the hardest and the greatest film I’ve ever done.”

The star admitted it was a difficult choice to return to the role of Sarah Connor, as she was worried the new film wouldn’t have the same impact as the originals.

Linda even shared she never thought there would be the possibility to come back again, saying it “never occurred” to her.

“I was like, ‘I don’t understand?’” the actress laughed, but was wholeheartedly in agreement over the women being tougher than hero Arnie decades after the first Terminator film.

Even so, it doesn’t seem like Linda is keen on returning for another movie.

“I don’t even want to think about it,” Linda grinned.

Asked what it was like working with the film’s star once more, the actress then added: “We get to do some really good work together this time – rather than just running from him!”

Will Linda Hamilton, Arnold and the cast come back yet again after the success of Dark Fate? Or is this their swan song?

ByHowever, Amanda stated that her children are not fazed by what she wears on Britain’s Got Talent, after receiving over 200 complaints to Ofcom...
Read more