The 10 biggest whoppers you can expect to hear at... 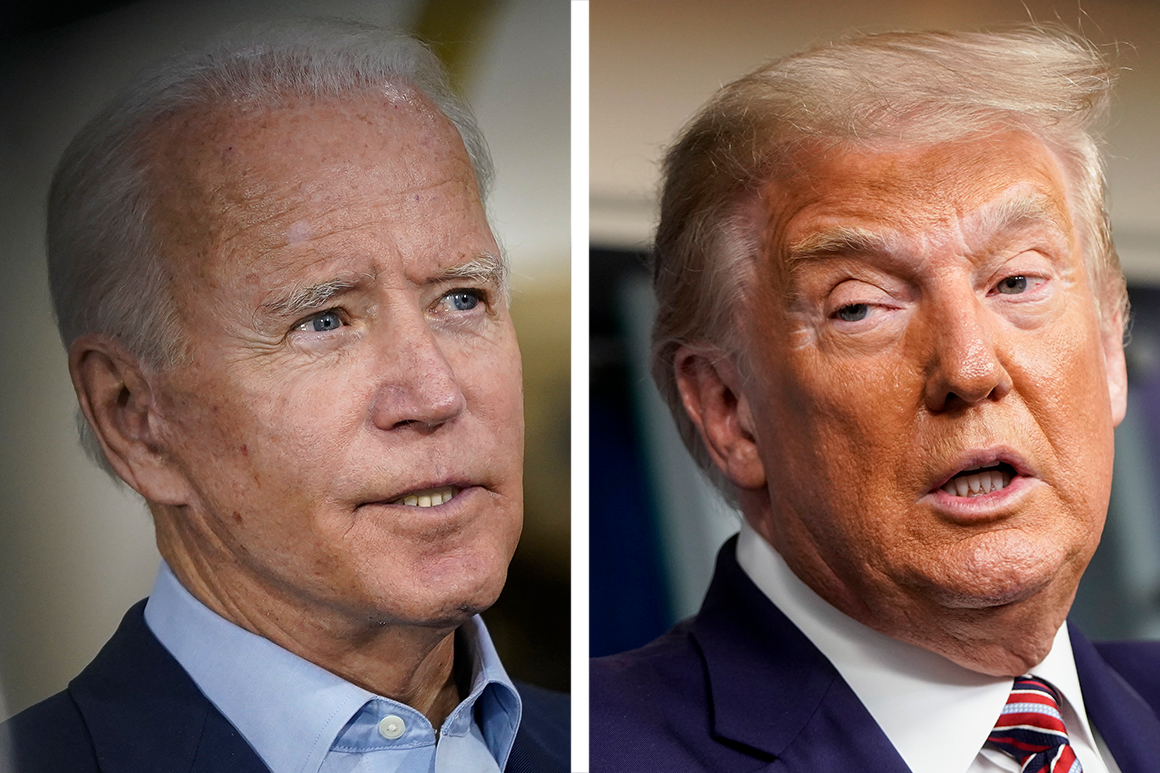 Democrats are sending millions of “unsolicited” ballots to Americans, which will result in widespread voter fraud.

Only nine states are automatically mailing all voters ballots this year, regardless of whether they requested one or not. Five of those states — Colorado, Hawaii, Oregon, Utah and Washington — regularly mail every voter a ballot. Four states — California, Nevada, New Jersey and Vermont — are doing so because of the pandemic, as is Washington, D.C. Montana also has given counties the option to do so, and most of them have taken advantage of it.

Cases of election fraud in the United States are exceedingly rare, and there is no proof of the type of mass fraud Trump has alleged. Experts acknowledge there are some slightly higher fraud risks associated with mail-in voting compared with in-person voting, but only when proper security measures are not in place. A recent study found that voting by mail does not benefit one party over another.

A coronavirus vaccine will be ready “within a matter of weeks,” and Biden will “delay the vaccine” if elected.

The late-stage Phase 3 clinical trials for potential coronavirus vaccines take about two years to complete, but they are likely to produce data within months that could justify an emergency use authorization. Preliminary results about the efficacy of the first few candidates are not expected until late October, at the earliest. Moncef Slaoui, head of the administration’s efforts to hasten vaccine development, has said it is “very unlikely” a vaccine will be granted an emergency use authorization by early November.

Centers for Disease Control and Prevention Director Robert Redfield has said that while a vaccine could be ready by November or December, it would likely not be widely available to the American public until the late second quarter or early third quarter of next year. Trump himself has said it would not be until April that the vaccine is available to “every American,” an extremely optimistic timeline. There is no evidence to support Trump’s claim that Biden would delay a potential coronavirus vaccine. Biden has said that decisions related to vaccine development and approval must be fully transparent and guided by science.

America will descend into lawlessness if Biden is elected, because Biden is insufficiently tough on violent agitators and will defund the police.

Trump has argued that incidents of violence that have accompanied some of the nationwide protests against racial injustice and police brutality offer a view into “Joe Biden’s America” — where citizens will lose their constitutional rights, criminals will overtake the suburbs, and “no one will be safe.” Trump also has alleged that Biden refuses to condemn rioters, plans to appease domestic terrorists if elected and supports the defunding of police departments.

Biden’s campaign has sought to counter Trump’s attacks by asking voters whether they feel “safe in Donald Trump’s America,” emphasizing that the nation’s unrest is unfolding under the incumbent president’s watch. Contrary to Trump’s claim, Biden has repeatedly denounced all forms of violence in U.S. cities. “Ask yourself: Do I look like a radical socialist with a soft spot for rioters? Really?” he said in an August speech. And while Biden favors additional police reforms and oversight, his campaign has put forward a criminal justice plan calling for an additional $ 300 million in funding to police departments.

He opposed the Iraq War from its earliest days.

Biden has repeatedly claimed he was opposed to the Iraq War immediately after it began. “From the moment ‘shock and awe’ started … I was opposed to the effort,” Biden said in a primary debate last July, referring to the military strategy used to describe the beginning of the 2003 invasion of Iraq. In an interview last September, he said that “the moment it started, I came out against the war at that moment.” He made similar comments to a voter in January.

Biden has said his vote in 2002 to grant President George W. Bush authority to use military force in Iraq was a mistake. He also has said Bush told him in an Oval Office meeting that the authorization was only necessary to allow United Nations weapons inspectors to enter the country. But a Bush spokesperson has said Biden’s “recollection is flat wrong,” and Bush himself said in a speech days before the vote: “I hope this will not require military action, but it may.”

Biden has a long record of statements made after the beginning of the Iraq War reiterating his support for his vote and military intervention in Iraq. Nine months after Congress approved the authorization for use of military force, Biden said in a speech that he “would vote that way again today.” In a June 2004 op-ed, Biden wrote: “I still believe my vote was just — but the president’s use of that authority was unwise in ways I never imagined.” A Biden campaign adviser said last September that Biden “misspoke by saying that he declared his opposition to the war immediately.”

He will replace Obamacare with a new health care plan that protects people with pre-existing conditions.

Trump has long vowed to replace Obamacare, formally known as the Affordable Care Act, with his own plan that will protect people with pre-existing conditions. But he failed to repeal Obamacare after being elected in 2016, when Republicans controlled both chambers of Congress, and he has not produced a substantive alternative to the landmark health care law. In June, the Trump administration backed a Supreme Court challenge to Obamacare, scheduled to be argued one week after Election Day, that could strip health insurance from more than 20 million Americans amid a pandemic.

After promising for months to unveil a new health care proposal ahead of the election, Trump announced last week his “America First” plan — made up of two largely symbolic executive orders that pledge to ban “surprise” medical bills and protect people with pre-existing conditions, even if the Supreme Court overturns Obamacare. Trump also said he would send $ 200 drug discount cards to 33 million Medicare beneficiaries to help pay prescription drug co-pays. Trump’s plan is far from a comprehensive legislative replacement for Obamacare, and it is unlikely to yield new protections for Americans. Trump has signed other recent executive orders on drug pricing and rural health care.

Biden abused the office of vice president to benefit his son Hunter financially.

Trump and his allies claim Biden abused his power by seeking the dismissal of Ukraine’s former prosecutor general, Viktor Shokin, in 2016 — all while Biden’s son Hunter sat on the board of a Ukrainian energy company, Burisma. But in pushing for Shokin’s ouster, Biden was advancing the interests of official U.S. foreign policy, other Western nations and anti-corruption advocates who universally viewed Shokin as corrupt. Shokin’s investigation of Burisma had reportedly long been dormant by the time he was forced from his post in Kiev, and there is no indication that the Bidens acted improperly with regard to Ukraine.

Trump was impeached by the House but acquitted by the Senate after allegedly pressuring Ukrainian President Volodymyr Zelensky to open investigations into domestic political rivals including the Bidens, and allegedly withholding hundreds of millions of dollars in military aid until Zelensky announced those probes. Trump has recently promoted the findings of a controversial, highly politicized Republican Senate investigation into the Bidens, which has produced little new evidence of wrongdoing.

He and Obama “rescued the auto industry.”

Biden tweeted this month that he and President Barack Obama “rescued the auto industry,” referring to the previous administration’s bailout of major U.S. car manufacturers in 2009 amid the Great Recession. It is true that Obama established an auto industry task force after taking office that resulted in the extension of tens of billions of dollars to General Motors and Chrysler, effectively nationalizing the two iconic American companies. Biden has regularly touted his role in the auto bailout, which carries significant weight with voters in Michigan and other Midwestern swing states.

But Biden fails to credit President George W. Bush’s role in helping save the auto industry. Bush first made federal funds available to car manufacturers in 2008, during the final weeks of his presidency, when he dispensed $ 17.4 billion to GM and Chrysler. Of that amount, $ 13.4 billion was extended almost immediately. Bush diverted the money from the Troubled Asset Relief Program, which Congress passed in October 2008 with the intent of bailing out the nation’s major financial institutions. From Bush’s initial intervention to December 2014, the federal auto bailout totaled nearly $ 81 billion and cost taxpayers $ 10.2 billion.

His “ban” on travel from China “saved hundreds of thousands of lives,” and that Biden called it “xenophobic.”

The Trump administration announced in January that it would close the border to foreign nationals who had recently been in China, while instituting a mandatory two-week quarantine for U.S. citizens returning from the country’s Hubei province, the epicenter of the outbreak.

But Trump’s order was announced after the coronavirus had already begun spreading across China, not in the opening stage of the outbreak, and it did not accompany broader federal efforts to prepare the U.S. for the coming pandemic. Despite being described as a ban, the order reportedly allowed nearly 40,000 people to enter the U.S. on direct flights from China. There is no evidence to support Trump’s specific claim that his order saved hundreds of thousands of lives.

On the day the administration rolled out its travel restrictions, Biden said at a campaign event: “This is no time for Donald Trump’s record of hysterical xenophobia and fearmongering to lead the way instead of science.” But Biden did not call Trump’s order itself xenophobic. Biden’s campaign has since said that he supports the travel restrictions.

Biden “will pack the Supreme Court” if he is elected.

Republicans moving to confirm the late Justice Ruth Bader Ginsburg’s replacement ahead of Election Day have warned that Democrats will seek to expand the Supreme Court if they win control of the White House and the Senate in November. “If Joe Biden and the Democrats take power, they will pack the Supreme Court with far-left radicals,” Trump said at a campaign event last week.

But Biden has long opposed court-packing, and he has declined to explicitly endorse or reject the latest calls from progressives to add more justices to the Supreme Court. In a speech this month following Ginsburg’s death, he personally appealed to Senate Republicans not to move forward with confirming her replacement, urging them to “follow your conscience.” Several Democratic senators and Senate candidates also have expressed reluctance to expand the Supreme Court.

He is “not banning fracking” if elected.

Biden’s position on fracking became muddled in a March primary debate with Bernie Sanders, during which Biden appeared to express agreement with Sanders’ call to end fracking and at one point said: “No new fracking.” Trump’s campaign has pointed to that exchange to claim Biden would ban fracking outright if elected.

But Biden’s campaign clarified he was referring only to his stated policy to ban new oil and gas drilling permits for federal lands and waters. Biden pushed back against the attacks from Trump’s campaign in an August speech. “I am not banning fracking, no matter how many times Donald Trump lies about me,” he said. Fracking refers to the controversial hydraulic technology that extracts natural gas and oil from deep within the Earth. It has turned the U.S. into the world’s leading energy producer and contributed to energy booms in states such as Pennsylvania, a political battleground.