The 2020 Kentucky Derby Will Be 'Unlike Any Other' 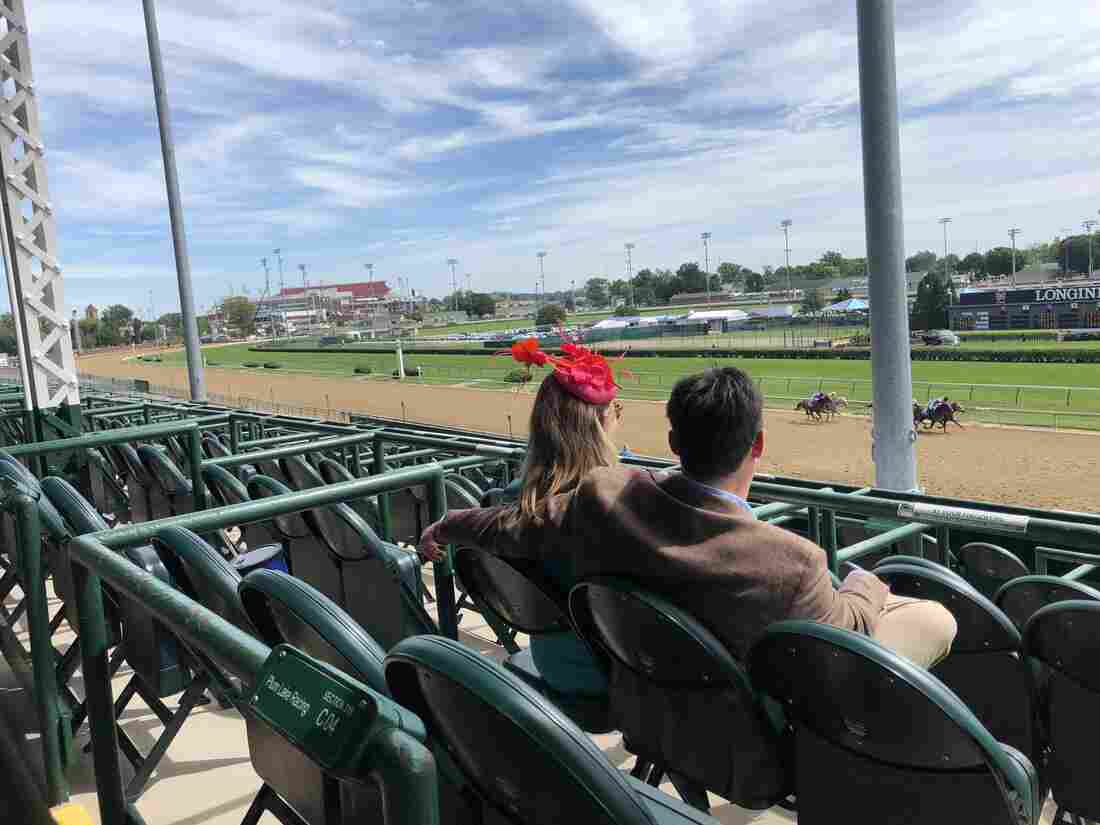 Spectators in an otherwise empty grandstand watch the Kentucky Oaks at Churchill Downs on Sept. 4. Oaks is typically a daylong party, a kick-off to the Kentucky Derby, which runs the following day. Jess Clark/WFPL hide caption 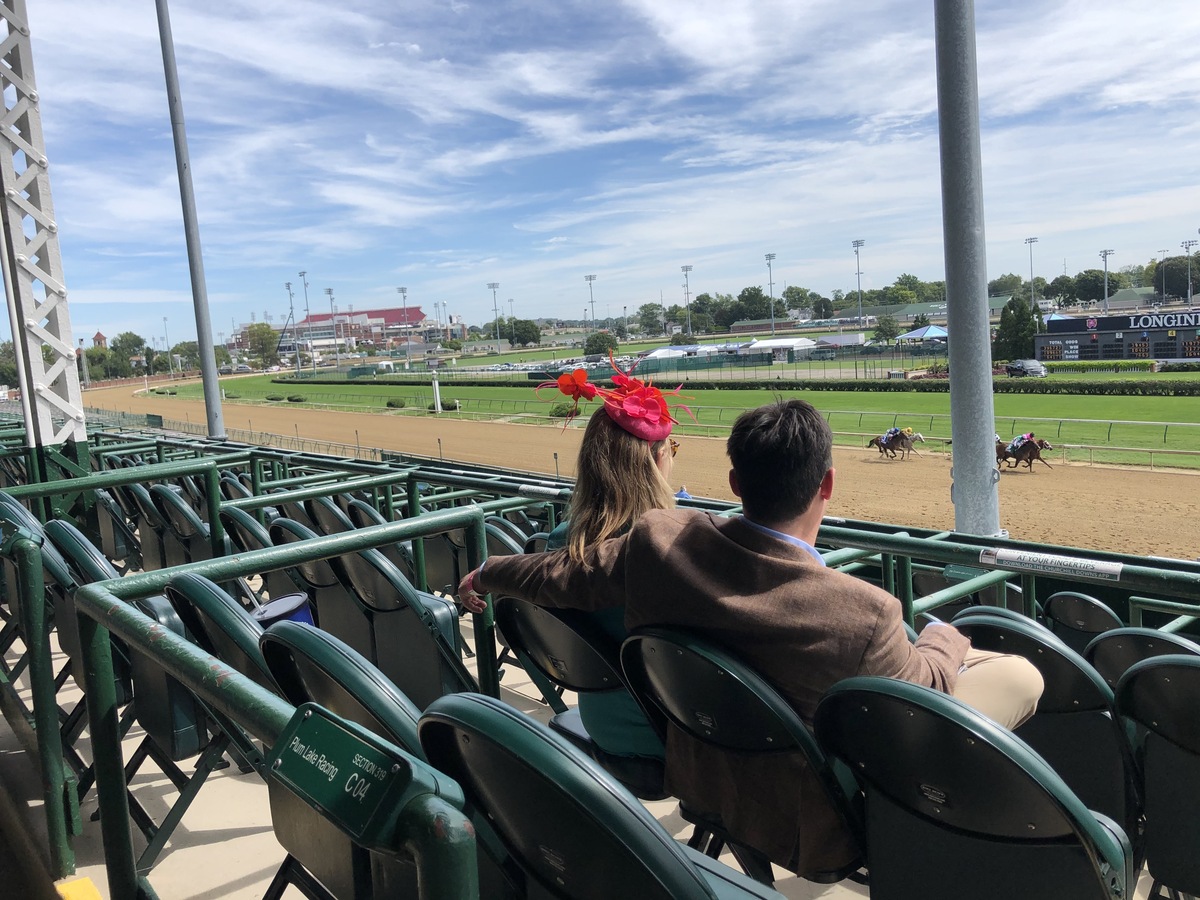 Spectators in an otherwise empty grandstand watch the Kentucky Oaks at Churchill Downs on Sept. 4. Oaks is typically a daylong party, a kick-off to the Kentucky Derby, which runs the following day.

The Kentucky Derby, usually the first weekend in May, was postponed this year until Saturday due to the coronavirus pandemic. There won’t be any fans in the stands for this year’s race, which is taking place just after Louisville marks 100 consecutive days of protests against racism and police violence.

Saturday, demonstrators plan to make Derby the 101st day. And this year, just as other athletes like players in the NBA have responded by refusing to play, there have been demands to cancel the Derby — something that’s never been done before.

“It can’t just be big hats, pretty dresses … you have to say and do something to acknowledge the situation,” says Haven Harrington III, the CEO and host of Main Event Sports Radio, who has covered the Derby for years. He says the town is still waiting with “bated breath” for the decision of whether or not to charge the officers who shot and killed Breonna Taylor.

He says the race should be run; it’s the city’s “signature event,” but while the horse racing industry doesn’t often weigh in on social justice issues, Harrington says now is not the time for silence.

Churchill Downs did issue a statement Thursday afternoon, recognizing that Black jockeys once dominated the race, but were then excluded, and acknowledging the pain community members feel right now as they wait for the state attorney general and FBI to conclude their investigation into the police killing of Taylor.

“The atmosphere of the Kentucky Derby will be different this year as we respond to those calls for change. This will be a Derby unlike any other. As it should be,” the statement said.

Churchill Downs CEO Bill Carstanjen has said it’s important to carry on and has repeatedly said the Kentucky Derby can and should be a unifying event.

“Tell me how this will unify this community, the running of horses,” says poet and activist Hannah Drake. She lives near Churchill Downs and has had a simmering frustration with the Derby for years. Those frustrations have grown even more recently, she says, as she faces possible arrest for obstructing a highway by protesting in the streets.

“But it’s fine for Derby to inconvenience me and block off streets and not let me pass?” she says. “It’s fine because it’s Derby.”

Drake recently wrote an open letter to Carstanjen, asking for some self-reflection of the institution’s lack of Black representation, and in her opinion, compassion.

“This is an institution that can redeem itself and they need to start by asking themselves how can we be better neighbors to the adjacent community and to the city,” Drake tells Louisville’s member station WFPL.

One way Drake thinks they could do better is by dumping a tradition that, she says, is rooted in racism: the annual presentation of “My Old Kentucky Home.”

Since the early 1920s, Derby fans have sung the state song before the start of the big race, sometimes weeping as they do so. It’s been called an anti-slavery song.

But Emily Bingham, a Louisville-born historian who is writing a book on the history of the minstrel song, says that’s not accurate.

“It was written by a white man about a Black person being sold down river from Kentucky to the deep south, to be sung by white men pretending to be black men on stages for white audiences,” Bingham says.

Bingham adds that the man who wrote “My Old Kentucky Home,” Stephen Foster, was not an abolitionist.

“It is true that he was writing in the midst of the bestseller success of ‘Uncle Tom’s Cabin,’ the anti-slavery novel by Harriet Beecher Stowe,” Bingham says. “And it is true that his original version of the song was about Uncle Tom and not ‘My Old Kentucky Home’ … but he was producing music for the blackface minstrel stage.”

Friday, Churchill Downs said the song will still be played this year. But after some discussion, they decided to have it performed by a solo bugler following a “moment of silence and reflection.”

Hannah Drake says that’s not good enough. It still doesn’t align with the company’s statement about empathy and change.

“We all know the words to the song. You don’t play it on a bugle and make it better. There is no way to dress up slavery,” she says.

Guy Verhofstadt turns on the EU as he rages at bloc's inaction – 'Get a grip Europe!'

The arch Europhile has urged Brussels to “get a grip” of the situation as EU member states fail to agree on sanctions against Belarusian...
Read more
World