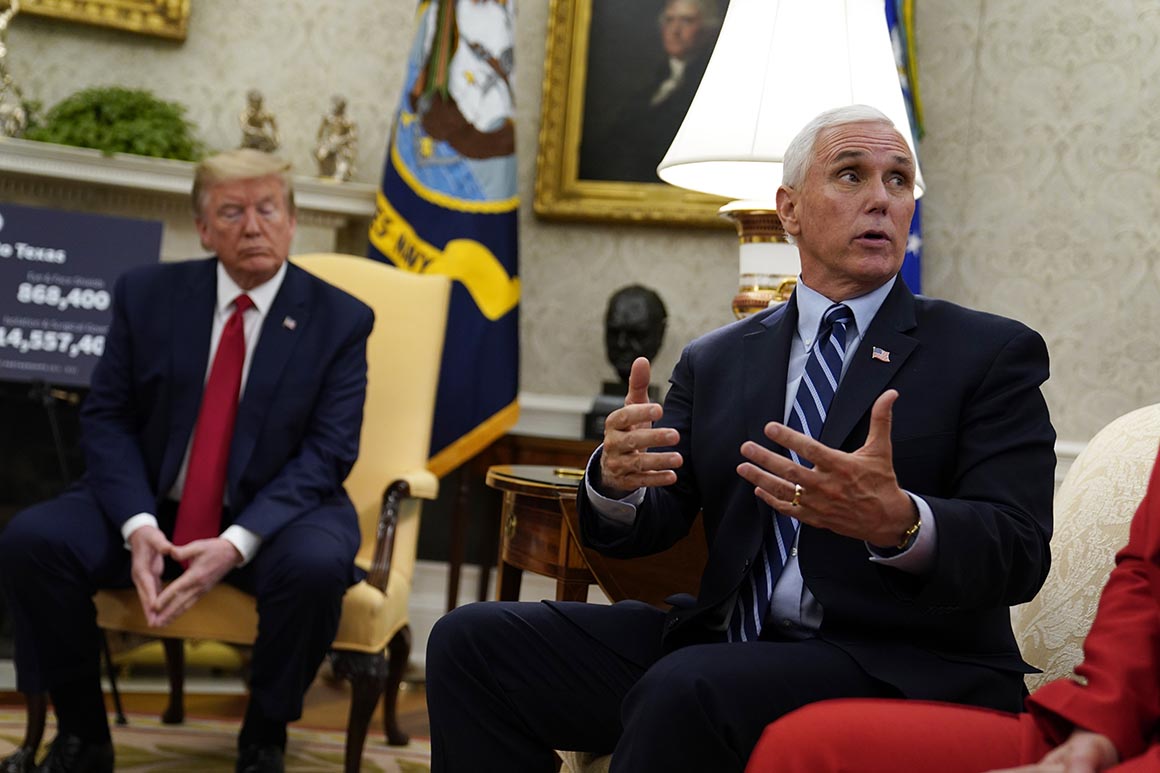 “The task force’s mission will no longer be in response to coronavirus, but on opening up America again,” said a senior White House official, adding that Pence has “truly loved” steering the government’s response to the deadly pandemic because it’s allowed him to bring “comfort, answers and transparency” to the American people.

As Pence continues to coordinate with health officials working to develop vaccines and therapeutics, he will maintain a travel schedule that includes frequent visits to front-line facilities and meetings with people hit by coronavirus or its fallout. On Friday, the vice president will discuss the return of religious gatherings with faith leaders in Des Moines, Iowa, and participate in a roundtable on food shortages.

No longer relegated to a White House side stage, Pence’s highly visible role leading the pandemic response gave him a rare political opportunity: a chance to impress Americans who have sought straightforward updates and genuine reassurance from their leaders — something Trump himself has at times struggled to provide.

Still, a person close to the vice president said he is anxious to outsource the lion’s share of supervision once the response is divided between FEMA, a handful of executive agencies and the remaining Pence-led team. The vice president has presided over daily task force meetings since late February, when Trump placed him in the command post, and has sometimes fielded phone calls from multiple governors each day.

“He’s been living and breathing this crisis 24/7 for three months and believes now is an appropriate time to let others take over,” said an administration official. The official added that Pence’s team is considering ways for him to refocus on the 2020 election without appearing insensitive to the reality that tens of millions of Americans remain out of work and thousands remain in mourning.

The senior White House official added that Pence “is looking forward to getting back to his normal routine just like every American, which does not mean he wants this process to be over.”

“He still thinks it’s really important work and he’s honored to be doing it,” the official said.

One Republican close to the White House said the longer Pence remains the public face of the administration’s coronavirus response, the more susceptible to criticism he becomes — especially as efforts to rescue the economy, by sending workers and consumers back into their communities, run the risk of creating deeper health problems closer to the 2020 election.

This person said Pence “may have signed his own death warrant” when he first took over the coronavirus task force because no amount of loyalty will shield him from becoming Trump’s fall guy if the virus returns this fall and costs the president a second term.

“People have a sense that Mike Pence is in the command chair on this and I do think, to a certain extent, he will be judged by the outcome,” said longtime conservative columnist Stephen Hayes, author of a 2007 biography on former Vice President Dick Cheney.

One triumph the vice president’s allies want him to lean into — as he continues to discuss the administration’s coronavirus efforts during interviews, official visits and eventual campaign events — is the public-private collaboration to produce personal protective equipment and ensure a steady supply of ventilators for the U.S. and other countries. While touring a ventilator production plant in his home state of Indiana last week, Pence repeatedly touted the U.S. ventilator surplus.

Others believe Pence’s close coordination with governors will be his saving grace if he runs in 2024 and faces an onslaught of criticism over other elements of the administration’s handling of the Covid-19 outbreak, including testing shortages and interagency squabbles — along with a hurried reopening that could have devastating health consequences in pockets of the country that have yet to reach their peak number of cases.

Instead of indulging Trump’s request in March to stop calling Democratic governors in Washington and Michigan, Pence continued to check in weekly with both governors and monitor the fulfillment of supplies they requested. In private phone calls with other governors, he has been careful to sidestep their personal frustrations with the president and always brings the conversation back to their needs and concerns, according to one state official whose boss has been on more than a dozen calls with Pence in the past few weeks.

A person involved with Trump’s reelection effort said Pence’s deliberate outreach to states has already benefited him politically, noting that his approval rating has risen in some recent polls. This person attributed the slight uptick to public praise from popular governors such as Larry Hogan of Maryland and Andrew Cuomo of New York. (Pence’s national approval rating was up 3 percentage points since mid-April in an Economist/YouGov poll released this week. But several other polls have recorded no recent changes in voter attitudes toward the vice president.)

Of course, if Pence chooses to run in 2024, his coordination with governors is likely to attract less focus than both the administration’s early failures in responding to the coronavirus outbreak and the laundry list of eye-popping statements Trump has made about the severity of the virus and treatment options for those who contract it.

The trouble for Pence is that “other Republicans running for president are going to have every incentive to say things should have been done differently,” said Goldstein, the expert on vice presidential history. “So he can talk about working effectively with governors, and I think there’s been plenty of indications that he has, but there are still going to be voices who say, ‘Why did you do this? Why did you do that?’”

One former White House official said Trump’s dubious medical claims are likely to become an albatross around Pence’s neck if he touts his leadership of the coronavirus task force in a future presidential primary. The president infamously suggested that household disinfectants might kill the virus — a claim he made after Bill Bryan, who leads the Office of Science and Technology at the Department of Homeland Security, delivered a presentation at the White House explaining how sunlight and humidity can kill the novel coronavirus. In addition to sparking a firestorm of criticism, the episode frustrated some Trump aides who were against Bryan’s presentation from the start.

But it also concerned Pence allies, who have long wondered how the vice president will survive thorny questions about Trump’s most controversial statements — comments that have sparked dayslong news cycles, created diplomatic crises and alienated key voters — if he runs as the president’s natural successor four years from now.

Regular news conferences by Trump and Pence over the course of the Covid-19 crisis have only magnified the vice president’s reluctance to contradict or correct the president, while inextricably linking him to his exceptionally polarizing boss.

Catastrophic earthquakes. Solar flares that bring down the entire power grid. The global rise of white supremacy. What could come after coronavirus?

On multiple occasions when Trump commandeered the White House briefing room to promote untested coronavirus treatments or lob insults at journalists, Pence’s trademark stoicism was on full display. Standing with his hands clasped just off to the side, there would be Pence — staring warmly at Trump with a soft smile.

“When the president goes out and says something off-script or sends mixed messages about states opening back up, none of that is something Mike Pence can control, but the results will ultimately shape the way Mike Pence is being seen coming out of this,” Hayes said.

The next several months could have profoundly positive implications for Pence if the coronavirus abates and the economy shows signs of improvement by the time voters cast their ballots this November. A second term for Trump, whose reelection chances are now tethered to his administration’s Covid-19 response, would give Pence another four years to build his own case for higher office in a period of economic recovery — much like George H.W. Bush did during the brief recovery period following the Black Monday market crash in 1987.

On Wednesday, Trump said the Pence-led coronavirus task force would readjust its purpose to be “very focused on vaccines and therapeutics,” an area in which the White House is hoping for a major breakthrough before the 2020 presidential contest heats up later this summer.

Pence, who has described ongoing attempts to develop a Covid-19 vaccine as “a Manhattan Project-style effort,” praised Trump’s intervention to speed up the development process during a closed briefing on Tuesday with reporters and fellow task force participants. Sipping on a Diet Coke as he guided discussions about outbreak zones, hospitalization rates and state-based approaches to reopening businesses, Pence’s deep grasp of the once-in-a-generation pandemic was on full display.

Despite the off-camera setting, the vice president’s approach was unchanged from a week before, when he joined Trump for a Rose Garden news conference and jumped in to provide particulars on testing expansions when the president himself was short on details.

“One of Pence’s strengths is he is an effective communicator who stays on message,” Goldstein said. “I think that’s helpful to him now, but it’s hard for me to see those moments being remembered in the long term.”