The art of being cunning 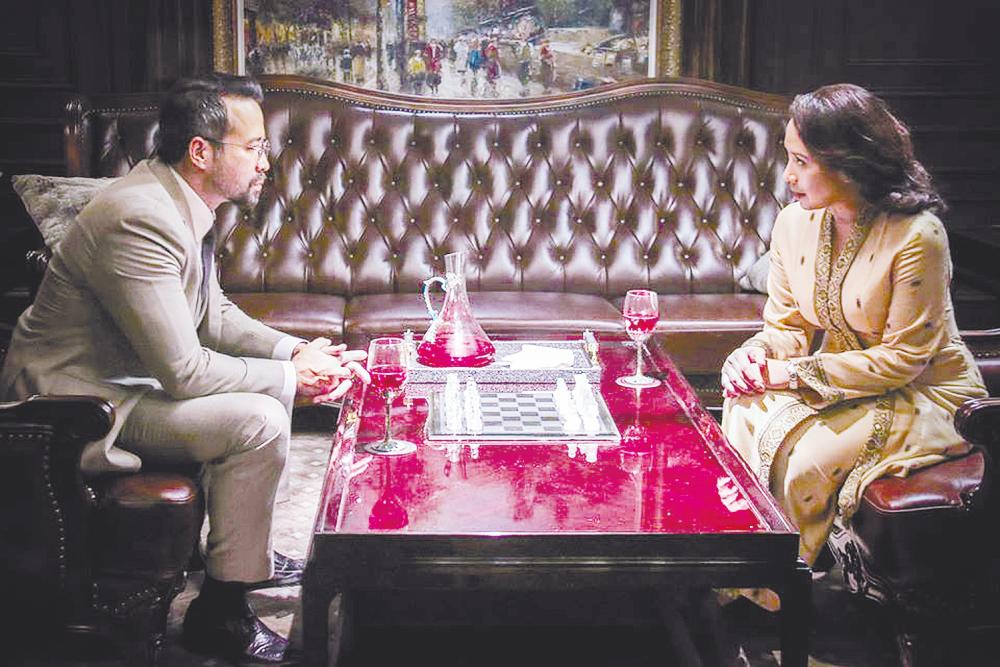 MALAYSIAN thriller Daulat is an unflinching look at the dark side of the political world. Tongues were set wagging when the film’s provocative trailer was released some time ago, and by its tagline: ‘You cannot win in politics by being nice.’

“What I am portraying is the cunning of a politician,” says Imran Sheik, the director and executive producer of the film. He also co-wrote the film’s script with Haziq Jamaludin.

“I think politicians need some cunning to survive. There is a relationship between [that] and effectiveness.”

The story begins with the ruling political party MUNA losing the general election. MUNA’s president appoints a new deputy, a rising female politician named Suri, who decides to go all out to make sure that MUNA wins the next general election, at all costs.

Playing Suri is talented actress Vanidah Imran, who became a household name with roles in films like The Red Kebaya and Perempuan Melayu Terakhir. Others in the cast include Tony Eusoff, Cristina Suzanne, Jasmine Suraya, Zul Zamir and Rashidi Ishak.

Production house Lacuna Pictures released some clips from the film to social media, and one can say that the clips look enticing.

Imran does not deny Malaysia’s very own general election on May 9, 2018 helped to spark his imagination. His second inspiration for the story comes from his own mother, who suffers from schizophrenia.

“My mother has been kind to many people,” says Imran, who holds a law degree and who runs two cafes.

“Sometimes when you are too nice, many people take advantage of you.”

He included some of his mother’s traits in his character Suri. However, unlike his mother, once Suri experiences the pain of betrayal she decides to walk a dark path.

The film initially met with some problems regarding censorship, and the filmmakers were strongly advised to make major changes to the storyline. But the director was reluctant to do so.

“We have not responded [to their suggestions] yet,” he says.

“Films are primarily about the stories. They want us to compromise on the story, and that is something I am not willing to do at this stage. I would rather show the whole story.”

Nevertheless, he does not rule out the possibility that Daulat may forgo a theatrical release, and instead be released on online streaming services, where there is less censorship.

“A woman always has a higher emotional range compared to a man.

“Besides, women always get discriminated against, and underestimated. But Suri uses this to her advantage. She shows that you can do a lot of things when people underestimate you.”

Daulat is Imran’s first feature film. In the past, he came up with the story (not the script) for a TV series called Jibril, which focuses on a lawyer who solves crimes.

He will begin working on his second film soon, which could be a sequel to Daulat.

He also revealed his idea for his latest film script, which is about a group of people with photographic memories, who use their gift to solve crimes. It appears that dark themes like politics and crime are his forte.

“I think darkness always appeals to many people,” he said.

“For example the media will not cover 1,000 airplanes that have landed safely. They will cover the one airplane that crashes.

“Vice has a place in our society. Lust has a position in relationships.

“But you cannot have too much lust, otherwise you will cheat on your partner. To live in a society with no darkness is idealistic. I used the darkness to show good values.”

One wonders what are the good values he is trying to show in Daulat?

He says: “If you do not vote properly, you could be voting for a dictator.”

His leading lady Vanidah says she is “utterly thrilled” to play Suri, whom she describes as determined and motivated.

“There are so few strong female characters these days.”

She pointed out that during the 1990s, there were a few strong, female-led films such as Selubung and Layar Lara.

“It appears we are regressing now, and people have stopped writing strong female characters,” she says.

“We need to change that.”

Interestingly, her real-life ex-husband Rashidi plays her character’s husband in the film. While this has raised some eyebrows, Vanidah says she does not have issues working with her ex-husband.

“Our divorce is a mutual thing and we believe that work is work,” she says.

She feels that most film directors tend to stick to safe genres such as horror, romance and comedy in order to guarantee box office returns.

“Imran was willing to gamble and try something new,” she says.

“We have never done a political thriller before. My first question to him was: ‘Are you crazy to direct a film like this?’ I was impressed by his boldness.”

Like Vanidah, I am sure that many people out there are impressed with Imran’s willingness to push the envelope, and are looking forward to seeing Daulat.