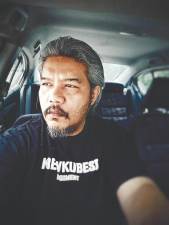 TODAY he is known as a movie poster and clothing designer under the name Kukubesi. Muhammad Fazli Ab Latif, 42, shares his journey from a computer design graphics student to a designer and entrepreneur.

“I studied Diploma in Computer Graphics Design in 1997. The very next year, I joined the workforce, I was 19 at the time. I worked until 2010.

That year, I started my own company and designed clothes under the label Empayar Kukubesi. I also designed movie posters,” said Fazli.

He explains that the name Kukubesi came about in 2006 when he was into photography. Digital photography was the hottest trend at the time, and everyone wanted to be a photographer.

“I felt that I needed a pen name. I used my graphic design knowledge to come up with branding for myself. So I used the name Kukubesi. It’s easy to remember, although it sounds rough,” said Fazli, adding that the name fit his target audience, which are Malays.

“Altogether in 2020, I have been a designer for about 22 years,” said Fazli. “My first movie poster was Hikayat Merong Mahawangsa with KRU Studios. After 11 years in the movie poster business, I have designed 45 to 46 posters.”

He shares some facts about designing a movie poster. Although the result can fit onto a single piece of poster paper, make no mistake, it is an involved process that begins in post-production.

“Designers are usually given a preview of the movie, and from there we will have an understanding of how the poster should look like. All this is based on what we see,” said Fazli.

“However, it is important to have the designer involved in the pre-production stage. The thing is, during this stage, designers can gather more information.

“We can plan the poster and the photoshoots through sketches. In Malaysia, we usually have three to six weeks for shooting.

“We take pictures and plan everything, from the pictures of the actors to the sets. Having an abundance of information and materials to work with makes the work of the poster designer easier.”

He then explained that the elements of a good movie poster depend on the target audience. A movie poster for a comedy has to show comedic elements, such as the reactions of the actors.

This is the same with horror movies, as well. All the horror elements can be expressed in many ways.

“To express these movie elements smartly, in a clever way, the designer must first know what the film is all about.

“In the west, they play with concepts such as minimalism and heavy graphics. I am interested in conceptual and minimalist designs, but in Malaysia, I rarely get the chance to practice it because most of the producers focus on selling the faces of the stars in their movies,” said Fazli.

What the designer knows and what the client wants often comes into conflict, and Fazli has experienced this himself in this career. His solution begins with an understanding.

“Artists would create for themselves and favour their ideas, whereas a designer would create based on their client’s ideas. When I understood these two concepts, I felt the need to find the middle point. A balance between when I give the ideas and when I take ideas from the client. You need to find that equilibrium.

“There will be conflicts, and when it reaches a certain level, we still do what the clients want, but we polish that idea to become the best it can be using the knowledge we have,” said Fazli.

He credits a part of his success to his knowledge of marketing, a subject that he says is near compulsory for all artists and designers today.

“Learn how to communicate, how to face a client, and who your target audience is. Knowing these things would make our job easier.

“I learned marketing myself starting in 2003. When I start working, folks from marketing often come to me asking me for this and that, but I didn’t understand what they are asking. And I always fought with them. So one day, I decided to learn marketing, to understand what they wanted and what they communicate to the client. So it is very useful, and I feel all designers need to have that,” said Fazli.