The Biden whisperer in the Senate 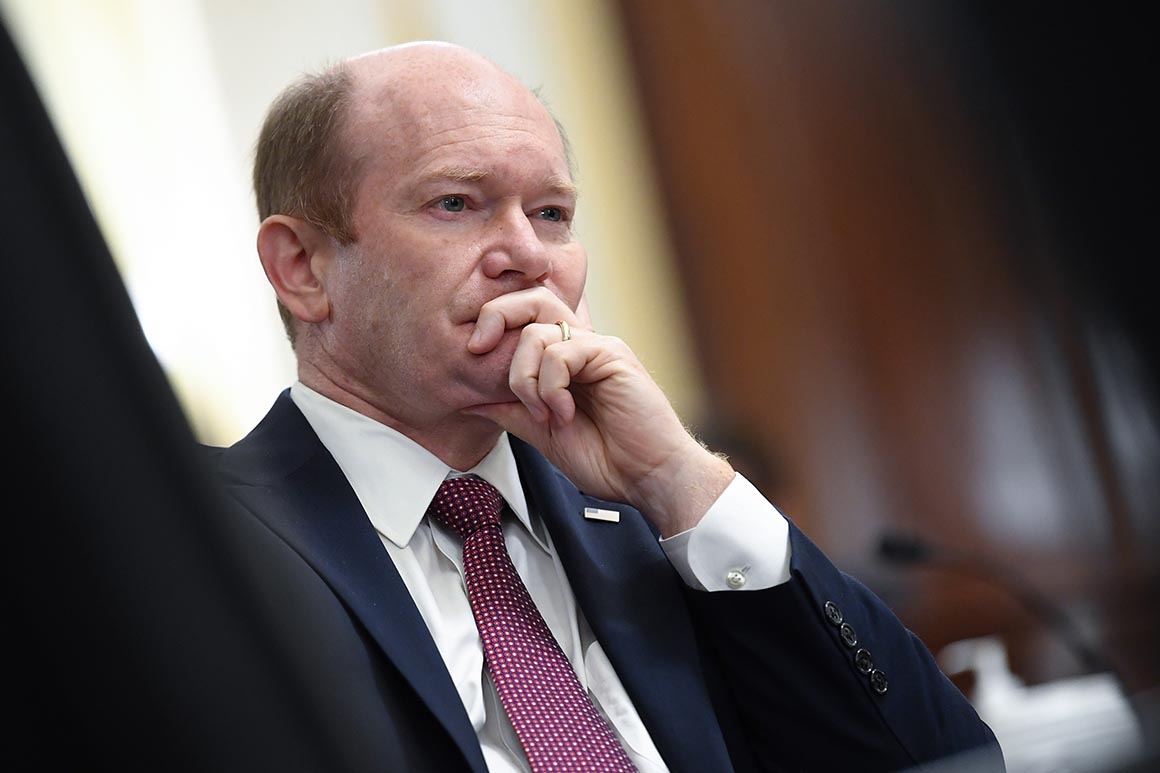 He first met Biden in 1986, when he was right out of college, at an event at George Washington University. Coons saw Biden speak in Iowa and New Hampshire during his first presidential run in 1988, volunteered in Iowa on Biden’s 2008 White House bid, and held off on endorsing Hillary Clinton in 2016 until it was clear Biden wouldn’t run.

Coons also had a close relationship with Beau Biden, Joe Biden’s son, with whom he began a Young Democrats organization together.

Sen. Susan Collins (R-Maine) recalled that when Beau died in 2015 from brain cancer and she wanted to reach out to Biden, Coons was the person she turned to.

“We’ve had conversations about Joe Biden, but the most extensive were when his son died and I wanted to call him and express my condolences and it was Sen. Coons who got me the phone number that I needed to do so,” Collins said.

“He speaks for Joe Biden differently, because he’s not talking about his policy issues,” added Sen. James Lankford (R-Okla.). “He’s talking about him as a person and that’s a different kind of a relationship.”

Coons said his talks with GOP senators about working together in a post-Trump era have been mostly preliminary. But Republicans know if they need to get in touch with Biden or his team, Coons is the right conduit.

Coons’ background on Zoom calls is a photo of him campaigning for Biden in New Hampshire with other Delawareans. He has Biden signs in his home from his time on the road, one from Nevada and another from Iowa. And he wears different Biden T-shirts to work out in.

He talks to the Biden campaign nearly every day, providing advice on a range of topics, including foreign policy. He’s held a number of faith calls for the “Believers for Biden” initiative as well as hosted several fundraisers, including one last week with former Secretaries of State Madeleine Albright and John Kerry. And he’s promoted Biden in more than 100 media interviews in the past year, according to his staff.

“I couldn’t be prouder to have him serve in the seat I once occupied,” Biden said in a statement. “He has also been an invaluable champion and advocate for our campaign on Capitol Hill and elsewhere since the day we launched. I am grateful for his friendship and counsel, and will continue to count on his leadership for many years to come.”

In the early days of the campaign, Coons spent hours on the phone and in person reaching out to local and state representatives in early primary states asking for their support, a sometimes exhausting task.

“I had a two-hour dinner with a state senator from New Hampshire,” Coons recalled. “We’re an hour and 45 minutes into it. He goes, ‘You know, I had dinner at this exact restaurant with Amy Klobuchar, Kirsten Gillibrand, Cory Booker, and I really appreciate this dinner.’ … I’m like, you’re not ready to endorse after two hours? Oh my god.”

Coons also sought to secure early endorsements from Senate colleagues last year for Biden, but many were hesitant given seven of their colleagues were also running for president. As a result, Coons said he “did a lot of listening.”

Now that Biden has wrapped up the nomination, Coons is having conversations with Senate Democrats about how to help Biden win the general election, particularly in swing states like Michigan, Wisconsin and Pennsylvania.

“Sen. Coons has talked to me many times about Vice President Biden,” said Sen. Debbie Stabenow (D-Mich.). “We’ve talked about Michigan. I think he probably talked to everyone about their circumstances in their states.”

He’s also reached out to former GOP lawmakers about supporting Biden. Coons is skeptical that any GOP senators will endorse Biden publicly, but said he could “absolutely, in a few cases” see some backing Biden in the privacy of their voting booth.

Months ago, when Biden’s campaign looked like it might be over after a string of early losses, Coons said he kept recalling a conversation he had with a state representative from South Carolina, while trying to secure yet another Biden endorsement.