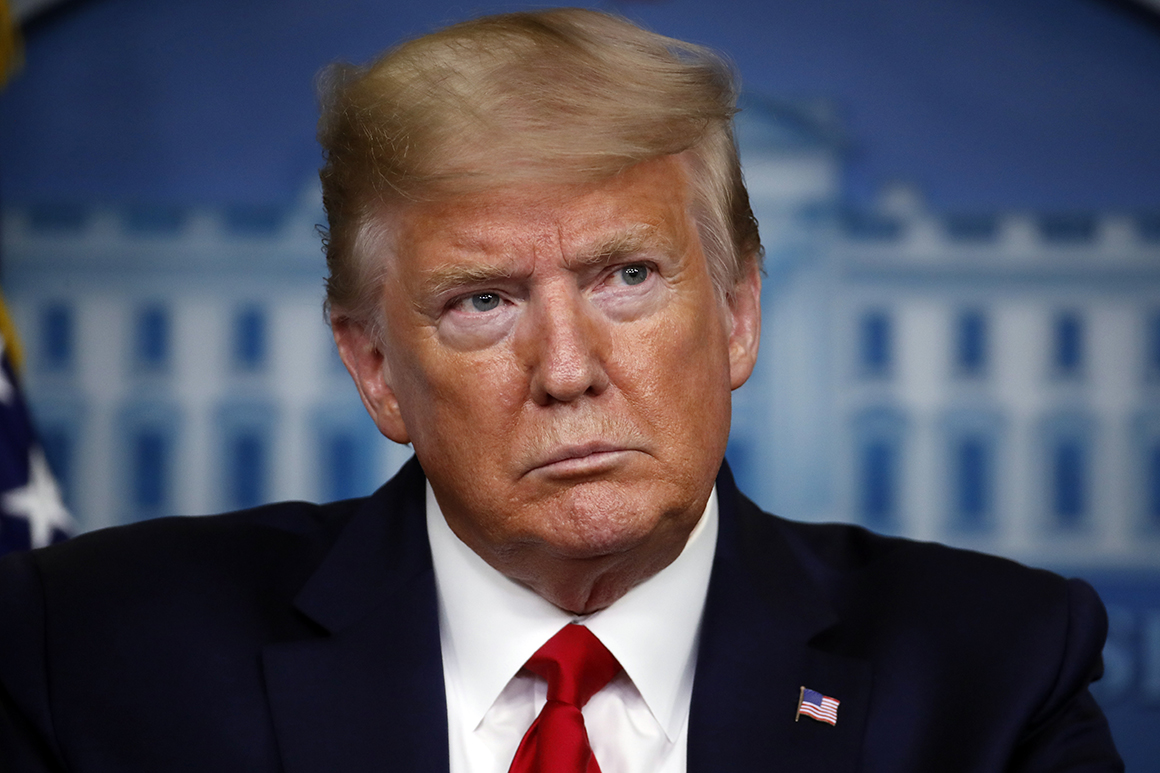 In times of national crisis, the American people typically come together behind their president.

But not this one.

Donald Trump isn’t benefiting from what political scientists refer to as a “rally ‘round the flag” effect — a traditional surge in popularity as the nation unites behind its leader during an emergency situation.

Even as the country confronts the greatest disruption to daily life since World War II, a series of new polls released this week show Trump’s approval ratings plateauing in the mid-40s, roughly where his approval rating stood a month ago, before the coronavirus shuttered much of the nation’s economic and social activity.

Throughout the first three years of his presidency, Trump’s approval rating has traded in a narrow band. But his failure to unite the country behind his leadership also reflects Americans’ judgment of his handling of the outbreak thus far: In poll after poll this week, increasing percentages say they think Trump is doing a bad job, and his administration hasn’t done enough to protect citizens from the effects of Covid-19.

The mixed-to-negative views of Trump’s handling of the coronavirus emergency also poses a significant threat to his reelection prospects, now that former Vice President Joe Biden has emerged as the presumptive Democratic nominee and the virus threatens to become the dominant issue of the 2020 campaign.

“There’s no ‘rally ‘round the flag’ because people see he hasn’t been handling it well,” said Margie Omero, a Democratic pollster who collaborates on a Navigator Research project that has been tracking public opinion of the outbreak and Trump’s response.

On Wednesday, six separate pollsters released new surveys. In all six, Trump’s approval rating was below 50 percent, ranging between 40 percent and 45 percent. And each suggested Americans had at best a mixed opinion of his response to the virus, and those with trendlines from weeks earlier in the crisis showed an uptick in the percentage of those critical of Trump’s response.

Trump’s low approval ratings early in a crisis defy historical precedent. Presidents, dating back to the start of the modern polling era after World War II, typically see their approval ratings rise significantly when the country faces emergencies, though they more typically occur around international conflicts, mostly involving the military.

According to Gallup’s archives, John F. Kennedy’s approval rating stood at 61 percent at the start of the Cuban Missile Crisis in the fall of 1962, but it had surged to 74 percent a month later.

In October 1979, Jimmy Carter had a 31 percent approval rating. But after the siege of the U.S. embassy in Iran, Carter’s approval topped 50 percent in early December and hit a high of 58 percent in January 1980. It didn’t begin sagging again until the spring of 1980, and Carter was defeated by Ronald Reagan in November.

More recently, George H.W. Bush’s approval rating shot up from 58 percent in early January 1991, to as high as 87 percent following the climax of Operation Desert Storm, the U.S.-led military action to drive Iraqi forces out of Kuwait.

Bush’s son, George W. Bush, had a 51 percent approval rating in the Gallup poll conducted in the four days leading up to the Sept. 11, 2001 terrorist attacks. By the end of the month, as Bush handled the immediate recovery and investigation, his approval rating hit 90 percent.

Trump, by contrast, saw only the slightest increases in his approval ratings. According to the RealClearPolitics average, his approval rating stood at 44.5 percent a month ago, on March 8. By last week, it had ticked up to 47.4 percent — but as of Wednesday afternoon, including the new polls, it was back down to 45.2 percent.

“We saw something,” said Patrick Murray, the director of the Monmouth University Polling Institute. “Whatever we saw was certainly not anywhere what the typical rally effect would look like, but there was a slight bump for him.”

Monmouth’s new poll, out Wednesday, showed Trump’s overall approval rating at 44 percent, down slightly from 46 percent last month, during the early days of the crisis.

That slightly increasing dissatisfaction with the federal response to the crisis was echoed in other polls. A new CNN/SSRS poll out Wednesday showed 45 percent of Americans approve of the way Trump is handling the outbreak, while 52 percent disapprove. The previous poll was conducted in early March — days before any significant restrictions or physical and social distancing measures were recommended — and it showed a similar, 7-point spread between the percentages of Americans who disapproved and approved of Trump’s performance on the issue.

A Quinnipiac University poll released Wednesday also showed a narrow majority disapproved of how Trump is handling the situation — 51 percent disapprove, compared to 46 percent who approve. That poll actually showed up a slight uptick in Trump’s overall job approval, to 45 percent, compared with the previous poll in early March, before any of the distancing measures were put in place by the federal government.

Those numbers were echoed by a POLITICO/Morning Consult poll out early Wednesday — which showed Trump’s approval rating at 44 percent, unchanged from four weeks ago at the start of the crisis — and other surveys released by Reuters/Ipsos and Navigator Research, the Democratic operation.

Private political polling generally shows the same stability — and a lack of a bounce — for Trump. Scott Tranter, the co-founder of the Republican data firm 0ptimus, told POLITICO that Trump’s job ratings have been relatively unchanged over the course of their polling. Some governors, Tranter said, have seen upticks in their approval ratings, while perceptions of Congress dipped during the negotiations over the last rescue package, which was passed and signed into law in late March after a week of back-and-forth between the parties on Capitol Hill.

Republicans aren’t sweating public opinion of Trump amid the Covid-19 pandemic, though the Trump campaign last week did tout results from battleground-state surveys that it said showed Trump with far greater approval ratings for his handling of the situation than in public polls.

Neil Newhouse, a partner at the GOP polling firm Public Opinion Strategies, said Trump’s near-constant approval ratings have always demonstrated that he has “a high floor and a very low ceiling.”

“He doesn’t have the room to grow that far. That’s just his ceiling,” Newhouse said. “People came into this with preconceived notions about the president, and there’s nothing he can do about that.”

While Trump’s approval ratings have dipped slightly in recent days, Newhouse cautioned that a strong response to the crisis in the upcoming weeks could reverse that negative momentum, at least at the margins.

“I think it’s still too soon to come to a verdict about how the president’s handled this,” he said. “There’s still a long way to go.”

Omero, the Democratic pollster and partner at GBAO Strategies, said Navigator’s data “beneath the surface” is more ominous for Trump. In the new poll out Wednesday, only 42 percent of voters said the word “competent” describes his reaction to the coronavirus, while 49 percent said it doesn’t apply. Forty percent say “honest” describes Trump’s handling of the situation, while 54 percent said it does not.

Part of what Trump can’t undo, Omero said, is his initial response to the virus during the earliest days of the outbreak. “He obviously downplayed the threat in the beginning, so I think people are responding to that,” she said.

Whether it’s the consistent polarization that has characterized his presidency or a specific reaction to his response to this grave crisis, it’s clear that Americans’ views of Trump break from U.S. political tradition.

“At the end of the day, the fact that there wasn’t a huge rally effect given the severity and the breadth of this crisis is really what’s unusual here,” said Monmouth’s Murray. “And it says a lot about Trump’s unwillingness or inability to capitalize on a moment like this.”