The Chase: Mark Labbett storms off set after disastrous loss... 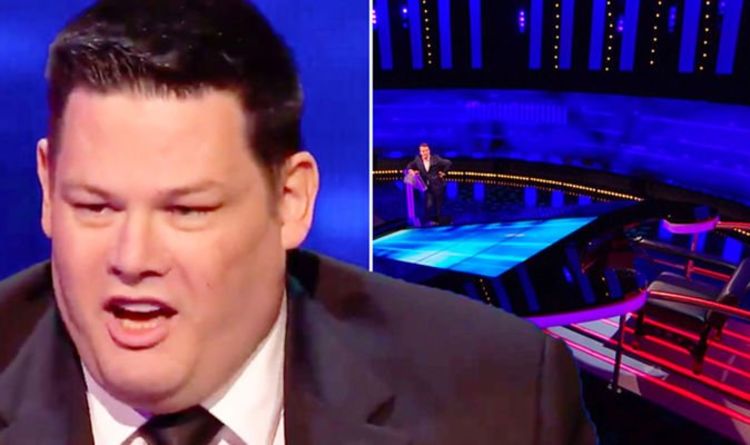 Mark Labbett, 54, is best known under his formidable alter-ego The Beast, what with The Chase star being one of the toughest quiz masters on the show. However, he lived up to his name today as after losing the final round of the ITV programme, he stormed off the set.

The episode began with host Bradley Walsh, 59, welcoming four new players to the show, all hoping to get their hands on a share of the jackpot prize.

With the first player knocked out by Mark, it was up to contestant Lynn to try and pick up the pieces, which she did by scooping a high offer of £35,000.

Unfortunately, the third quizzing hopeful failed to follow in their predecessor’s footsteps, but the fourth contestant, Ian, took a lower offer of minus £5,000 to join his teammate in the final chase.

Having applauded the pair for their tactics, The Beast then tried to defeat them in the concluding round, only to lose and was he left raging at the result.

After the pair won a jackpot of £30,000 with just two points between their money and the chaser, they were in jubilant spirits.

Sat watching the celebrations, Mark threw his hands in the air before Bradley addressed the mistakes The Beast had made.

Furious at the defeat, the quizmaster then congratulated the contestants on their efforts, just seconds before taking to his feet.

With no precedent to what was about to happen, the winners and host were left stunned when the quizmaster disappeared from shot after storming off.

Taking to Twitter, viewers were in shock at The Beast’s response to his loss as a chaser has never stormed off before.

One posted after watching the drama unfold: “#TheChase Loved Bradley Walsh congratulating the team and then turning to the chaser …. Oh you’re not there.”

Another added: “Dear, dear me! Someone was a very sore loser tonight! #thechase #MarkLabbett #TheBeast #ITV.”

Whilst a third commented: “Love it when @MarkLabbett gets annoyed. You are still the best Mark, not to worry #thechase.”

The official Twitter account for The Chase commended today’s winners of being able to defeat the quizmaster; a feat proved strenuous by many.

“Worked as a team to come up with a strategy, answered well, and executing pushbacks against The Beast. Well deserved. #TheChase.”

Throughout the programme, Mark had been full of praise for the contestants for being able to think strategically instead of trying to accumulate more money.