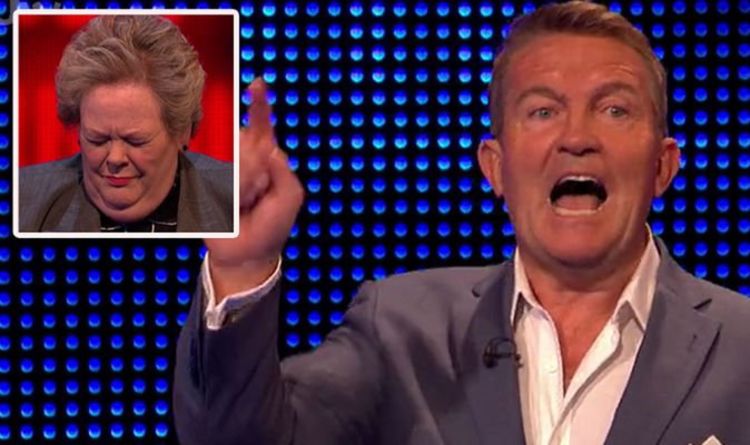 The Chase Celebrity Special saw Bradley Walsh, 60, back on hand to host a new series of the show, helping four famous faces win some money for their chosen charities. Saturday’s edition of the ITV quiz programme was the first to be filmed under the new coronavirus measures, with contestants sitting one metre apart from one another and limited contact between them and the presenter. However, viewers were still confused by the changes and quickly took to social media to comment.

Those watching at home were left in turmoil as at some points during the episode, Bradley seemed to be standing very close to the contestants.

However, a spokesperson for the broadcaster explained this was because filming was undertaken with Close Contact Cohort measures adhered to.

These type of support bubbles are introduced when all members are tested for COVID-19 and then if their results come back negative, they can work within close proximity to one another.

“Series 11 of The Chase Celebrity Special was filmed using approved Close Contact Cohort protocols. As such, host Bradley Walsh and the celebrity contestants were able to physically interact for short intervals,” the statement read.

“The safety of our cast and crew is of the utmost importance,” the spokesperson clarified, but with no indication of this given at the start of the celebrity instalment, fans were debating whether it was even a new episode.

READ MORE: The Chase’s Shaun Wallace shuts down Bradley as he questions his skill

A fourth shared: “If this was filmed in lockdown why are they standing so close and Bradley is shaking their hand #thechase.”

“Really good social distancing on celebrity #TheChase tonight,” a fifth viewer sarcastically remarked on social media,” with a sixth asking: “Am I having a meltdown or is that table longer?! #TheChase.”

However, despite the outpour of confusion, the game continued to play out with comedian Dane Baptiste, 38, first up to face The Governess star, Anne Hegerty, 62.

Luckily he got the balling rolling with the funnyman adding £8,000 to the jackpot and next up it was rugby referee Nigel Owens, 49.

Unfortunately, the sportsman was kicked off the show when The Chaser outran him, meaning he failed to add his £3,000 to the jackpot.

Countryfile presenter Anita Rani, 42, was the third contestant to face Anne and she managed to accumulate £7,000 during her cash-builder round.

Unlike her predecessor, the television personality made it back to the player’s table, leaving broadcaster Mark Pougatch, 52, as the last person able to add anything to the jackpot.

And he didn’t disappoint as he opted to take a higher about of money had he’d won during the cash-builder round and played for an astonishing £105,000.