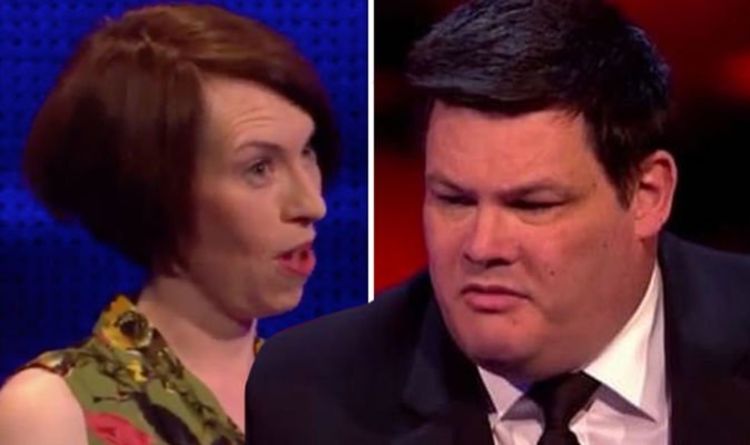 Mark, 54, was on hand to face four more contestants on The Chase, with The Beast star hoping to stop the players from walking away with a jackpot prize. The quizzing guru had a shaky start to proceedings as he got a number of questions wrong, but it wasn’t long before The Chaser was back on his A-game. When he faced contestant Colette on the ITV quiz show, however, he was intrigued by her profession and as a result, stopped host Bradley Walsh, 60, from carrying on with the game to ask the speech therapist for some advice.

After his higher and lower offers were rejected, Mark halted proceedings by saying: “As I’ve got a speech therapist here, how do you pronounce the number between two and four please?”

The contestant offering the advice replied: “The thing with you Mark is that you change a ‘th’ to a ‘f’.

“So, what we’d have to do is maybe start with some auditory discrimination, so you’ll have to start paying me.

“We’ll need time,” Colette continued, with The Beast rounding off the discussion by stating: “Fair enough.”

Host Bradley then resumed proceedings on the game, which saw the speech therapist make it back for the Final Chase.

Colette wasn’t the first player to face The Beast on Friday afternoon as her teammate Ben was first up to face the quiz guru.

Accumulating £3,000 during the cash builder round, the player stated he would’ve liked to have challenged The Dark Destroyer star Shaun Wallace, 60.

So when it was revealed Mark was the one he was going to have to beat, the player made sure he was on his best form.

Indeed he delivered as he was the first quizzing amateur to make it back for the Final Chase and got the jackpot started.

By the end of the Final Chase, The Beast was defeated by the trio of contestants, meaning each walked away with £5,500 each.

Reflecting on the game, Mark said he was disappointed by the fact he’d got a question wrong about chocolate.

Taking to Twitter, those watching at home commented on the result, with one writing: “Well done to the peeps on the #TheChase @itv @ITVChase maybe I should try you never know.”