'The damage is done': Judge denies Trump administration request to... 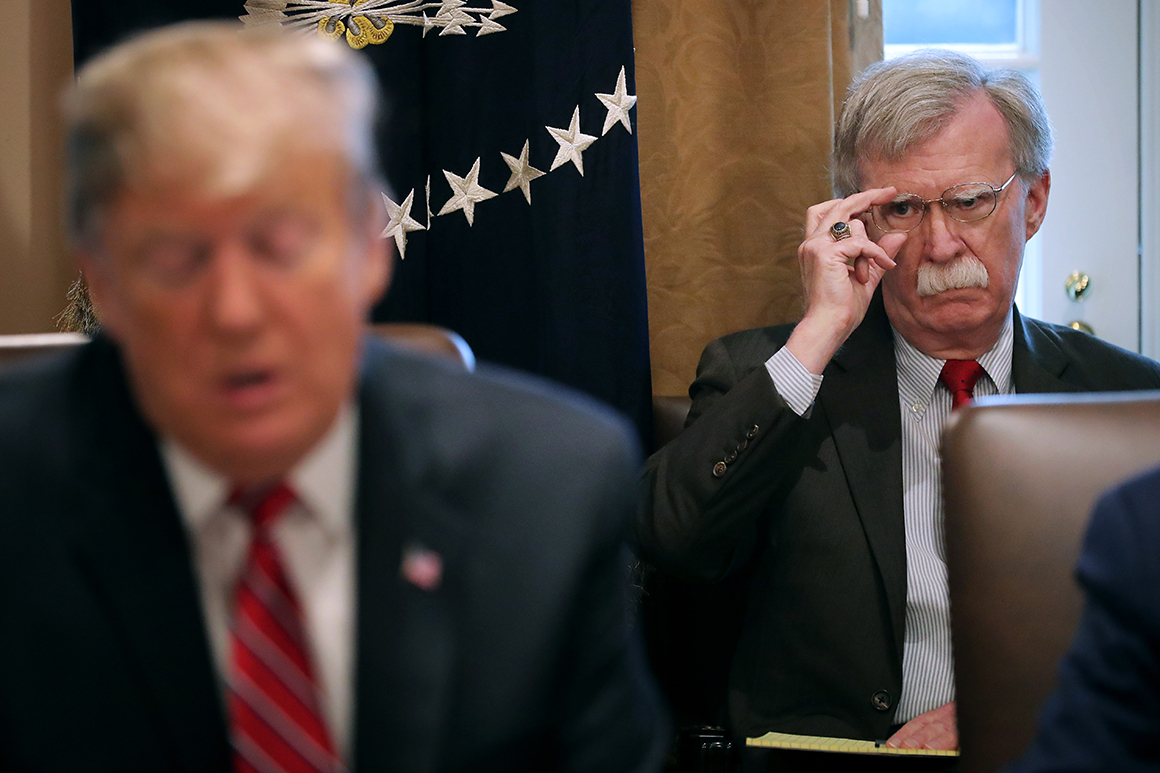 Indeed, the judge criticized Bolton so severely that the ruling didn’t seem like much of a victory at all for the former foreign policy hawk who spent 18 months as a top aide to President Donald Trump.

Lamberth, an appointee of President Ronald Reagan, even went so far as to suggest Bolton might be prosecuted for his conduct.

“Defendant Bolton has gambled with the national security of the United States. He has exposed his country to harm and himself to civil (and potentially criminal) liability,” Lamberth wrote in his 10-page order.

Trump seemed to underscore that message Saturday through tweets arguing that Bolton should face severe consequences for his actions.

He tweeted: “BIG COURT WIN against Bolton. Obviously, with the book already given out and leaked to many people and the media, nothing the highly respected Judge could have done about stopping it…BUT, strong & powerful statements & rulings on MONEY & on BREAKING CLASSIFICATION were made…. ….Bolton broke the law and has been called out and rebuked for so doing, with a really big price to pay. He likes dropping bombs on people, and killing them. Now he will have bombs dropped on him!”

The White House press secretary later said in a statement the court’s ruling “vindicated” the government’s claims against Bolton, who “bet wrong” by pressing ahead with the book’s release.

While Bolton complained that the White House unfairly dragged its feet in reviewing his manuscript, Lamberth rejected the notion that the delays were unreasonable.

“Many Americans are unable to renew their passports within four months, but Bolton complains that reviewing hundreds of pages of a National Security Advisor’s tell-all deserves a swifter timetable,” Lamberth wrote.

The ruling leaves no impediment to the official release of Bolton’s book on Tuesday. The Justice Department could appeal the decision, but the prospects for such an appeal seem slim. Spokespeople for the department did not immediately respond to a request for comment Saturday.

In any event, government lawyers are expected to press forward with the litigation in a bid to force Bolton to cough up any profits he made or makes from the book. He reportedly got a $ 2 million advance from publisher Simon & Schuster.

Bolton lawyer Chuck Cooper praised Lamberth’s conclusion that no injunction should be issued, but noted disagreement with the rest of the judge’s order and suggested it was far from the final word in the dispute.

“We welcome today’s decision by the Court denying the Government’s attempt to suppress Ambassador Bolton’s book,” Cooper said in a statement. “We respectfully take issue, however, with the Court’s preliminary conclusion at this early stage of the case that Ambassador Bolton did not comply fully with his contractual prepublication obligation to the Government, and the case will now proceed to development of the full record on that issue. The full story of these events has yet to be told—but it will be.”

Simon & Schuster also welcomed Lamberth’s decision not to try to block the book.

“We are grateful that the Court has vindicated the strong First Amendment protections against censorship and prior restraint of publication. We are very pleased that the public will now have the opportunity to read Ambassador Bolton’s account of his time as National Security Advisor,” the publishing house said in a statement.

Lamberth’s ruling came after a nearly two-hour court hearing conducted on Friday by videoconference and telephone due to coronavirus restrictions.

“The horse, as we used to say in Texas, seems to be out of the barn,” Lamberth said at the outset of Friday’s hearing. “It certainly seems difficult to me about what I could do about those books all over the country.”

Yet Lamberth raised repeated issues with the way Bolton ultimately appeared to short-circuit the review process to rush out the brutal account of Trump’s leadership.

Bolton’s book alleges that Trump encouraged China’s construction of camps for its Uighur population, and that he pleaded with Chinese President Xi Jinping to purchase American agricultural products in order to aid his reelection. It also describes Trump’s offer of favors to autocratic leaders and affirms House Democrats’ impeachment evidence that Trump pressured Ukraine to investigate his political rivals in exchange for military assistance. Trump has said Bolton is a “liar,” and multiple Cabinet officials have disputed his version of events.

In Friday’s hearing, Lamberth pressed the Justice Department attorney arguing for the restraining order, David Morrell, to explain what benefit such an order would have at this point given the wide distribution of the book.

Morrell insisted that there would be value in retrieving as many physical copies of the book as possible and in heading off e-book and audiobook versions that have yet to be released.

“This is not an all or nothing proposition,” said Morrell, a deputy assistant attorney general in Justice’s Civil Division. “The government still has an interest in stemming the flow of classified text out of Simon & Schuster and all of those affiliates … and its distribution chain.”

Morrell also said the logistics of implementing an injunction were not really the government’s problem, but Bolton’s since he breached his agreements related to classified information.

“The onus is on Mr. Bolton to figure out how to do this. … This is a problem of his own making,” Morrell said, adding that the ex-official should “claw the book back.”

While Lamberth sounded skeptical about his ability to recall the book, he peppered Bolton’s attorney with questions about why the former high-ranking ex-official unilaterally moved to publish without written authorization from the National Security Council.

Lamberth made plain that he thought Bolton acted rashly and in violation of his obligations when he gave the go-ahead for publication of his book in the absence of a formal sign-off from the White House.

When Bolton’s attorney, Chuck Cooper, asserted that Bolton had followed his legal obligations “not just in spirit but to the letter,” Lamberth shot back: “No, he didn’t.”

“He had an obligation … once he invoked that process, he can’t just walk away,” the judge declared, adding, “He didn’t tell the government he was walking away. He just walked away and told the publisher ‘go publish.’”

Lamberth’s posture spells trouble for Bolton when the judge considers the White House’s broader case that Bolton should forfeit the proceeds from his book because it contains highly classified information that could do “exceptionally grave” damage to national security.

Bolton has suggested that politics corrupted the review process, but Lamberth wondered why he didn’t seek judicial intervention rather than simply telling his publisher to send the book to the printer.

Cooper argued that Bolton simply considered the review process complete once the initial reviewer, Ellen Knight, deemed his manuscript free of classified information. All that was left, he believed, was a pro forma written letter, Cooper argued.

But that letter never arrived. Rather, his successor as national security adviser, Robert O’Brien, took over the process and designated a more senior aide to review the book without informing Bolton.

Morrell said Bolton’s decision to bail out on the review process was reckless.

“It is not his role or entitlement to decide when the process is done. That belongs to the government and the check on that is judicial review,” the DOJ lawyer said. “You can’t have an author unilaterally deciding to bail out when they’re unhappy.”

Following the public court hearing, Lamberth held a closed-door, classified session to hear from government officials who have said in secret court filings that Bolton’s book contains classified information. Bolton’s lawyers were excluded from that session.

The case unfolded rapidly this week, from the filing of the suit on Tuesday to the government’s injunction request the next day. Bolton’s lawyers responded with a motion to dismiss the lawsuit entirely, contending that the Justice Department’s legal drive violates the First Amendment.

Bolton argued that the administration’s claim of classified material is a fig leaf for its effort to punish him for revealing embarrassing information about Trump.

While lawyers and high-ranking national security officials have submitted to the court grave warnings about the national security damage the book could do, Trump has made a series of sweeping statements that laid bare his desire to suppress the book merely for breaching what he views as a duty of confidentiality owed by White House aides.

While there is a legal framework to protect national security secrets, there is no obvious legal mechanism to impose blanket secrecy on former White House officials, although Trump seems to believe such an obligation can be legally enforced.

“Conversations with me, they’re highly classified,” Trump told reporters at a photo op Monday with Attorney General William Barr. “I told that to the attorney general before. I will consider every conversation with me, as president, highly classified.”

Trump’s complaints about Bolton divulging private conversations have also been somewhat muddled by a series of claims by the president that the book is largely or completely fabricated. In a tweet Thursday morning, he called Bolton’s tome “a compilation of lies and made up stories.”

Lamberth seemed to pick up on Trump’s agitation about the Bolton book, asking Morrell during the hearing whether the president had waded into the review process by directing officials to claim certain matters were classified.

“Your honor, I have not spoken to the president. I’m not aware of that,” the DOJ attorney said.

Much of Bolton’s move to dismiss the case against him focused on DOJ’s claim that his book contains highly classified “compartmented” intelligence, which would trigger a higher standard of review. Bolton says he took great care to exclude any classified information — but especially so-called SCI material — and submitted to a painstaking review with Knight, to be extra careful.

Morrell also conceded under questioning from Lamberth that at least some of the information the government says is classified in the book was classified after the initial review.

On Friday morning, the Justice Department acknowledged that the newly installed NSC intelligence official tasked with the additional review of Bolton’s book — Michael Ellis — hadn’t been formally trained as an “original classification authority,” a requirement for officials who make classification and declassification decisions. Rather, he obtained his training on June 10, the day after he completed his review of Bolton’s book and then retroactively reaffirmed his earlier determinations that the book contained additional classified material.

Bolton’s lawyer noted the disclosure to Lamberth. “This was the day after his declaration says he completed his review. How about that?” Cooper asked.