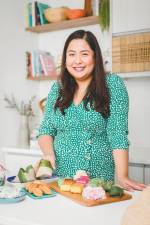 Many know her as the bubbly cook on TV who in 2015 was awarded the title of Food Hero Asia by the Asian Food Channel (now known as the Asian Food Network).

Her shows Diari Mangkuk Tingkat Bersama Ili, Home Cooked: Malaysia, Family Feast with Ili and By the Sea with Ili made her popular among viewers, who loved her enthusiasm for food and the simple methods she used to prepare them.

As a child, 35-year-old Ili Sulaiman developed a special love for food. Hailing from a diverse ethnic background (Chinese and English on her mother’s side, Sri Lankan and Malay on her father’s side), Ili saw first hand how food brings everyone together.

“Food was the consistent thing for me since I was small,” said Ili. “I was always in the kitchen with my grandmothers. Mondays to Fridays, I was with my Chinese grandmother who was a teacher.

“On weekends I was with my paternal grandmother, my nenek. That is when the whole family would come over.”

Helping her grandmothers with meals was something she did on a regular basis.

She never thought she would be cooking professionally, though. While studying business in London, she took up a job as a receptionist at Mosimann, a fine dining establishment.

This is where she learned first hand about the food and beverage business, as well as some finer points about professional cooking.

Exposed to high standards, Ili fell in love with the service industry and knew it was what she wanted to do with her life.

She was even part of the Mosimann service crew who catered at Prince William and Kate Middleton’s wedding.

Upon returning home after eight years in London, she worked for Teach For Malaysia for two-and-a-half years. This took her across the country.

“This is where I saw the power of food, and how it connects people. We were young go-getters for this non-profit trying to talk to government officials.”

She said discussions were tough, but the moment they had their snacks or ‘minum petang’, tones softened.

“Travelling and eating all this local food re-ignited my love for cooking again. Once I started cooking,

I cooked for a friend of mine who was struggling with stage 4 cancer. He told me I should do this for a living and that he has never seen me look happier.”

So she quit her job, and started her own catering business, delivering food to clients with tiffin carriers, after being inspired by her neighbour who also had food delivered to her.

Ili said: “I had a good business model. I was catering to families. I was cooking every day.

“Then I had the show Diari Mangkuk Tingkat Bersama Ili. I liked cooking for TV and people liked me. So I applied for Food Hero and won.”

When she won Food Hero Asia, her show moved to the Asian Food Network, which exposed her to an even larger audience.

She, along with her partners, set up a social enterprise called Agak Agak Initiative, in which underprivileged young people were given the opportunity to learn more about the food industry by working at Agak Agak, a restaurant preparing good local comfort food.

However the parking situation in the area affected the business, and it closed down in 2017, after just one year.

Ili and her partners also helped carry out training of the staff of other restaurants.

In 2018, one of her partners, Basirah Yeusuff, discovered that there was interest in re-opening Agak Agak in Seoul (especially as the restaurant’s name sounded like ‘to nibble’ in Korean).

Although Ili helped with the opening of Agak Agak in Seoul, she is not affiliated with it in any way.

While she was running Agak Agak, she was still doing her shows and running her digital platform Dish by Ili. She also wrote a cookbook and was a cookware ambassador.

This year, Ili is back after signing a deal with Discovery, the new parent company for the Asian Food Network.

Turns out the channel’s digital platform has over five million views.

So they are making it more interactive by incorporating e-commerce elements to it, as well as some really convenient tools such as helping users build their own cookbooks featuring recipes from different celebrity chefs.

Ili said: “I did some short clips for Christmas and Chinese New Year. Right now I am working on Raya recipes.”

Ili also recently switched to a gluten- and dairy-free diet.

She explained: “It is mainly for health reasons. In late 2018, I was diagnosed with polycystic ovary syndrome.

“My period stopped for three months, I was tired and so overweight. I could not lose weight.

“I would work out, eat salads, but nothing was happening. I spoke to doctors and found a way to manage my hormone imbalance with my diet.

“Thank God I work in this field. I can use my experience to help create content, and help others who are struggling like I am.”

Ili also took this as a challenge to find a way to make Malaysian food more interesting, as her viewers are not only from Southeast Asia but across the world.

She has no plans to get back into the restaurant business, as she is busy with her cooking clips as well as Dish by Ili.

Facebook
Twitter
Pinterest
WhatsApp
Linkedin
ReddIt
Email
Tumblr
VK
Previous articleHuge clue Princess Beatrice revealed that tells us who is designing her wedding dress
Next articleSpace news: Astronomers have found a teardrop-shaped star and it's as weird as it sounds