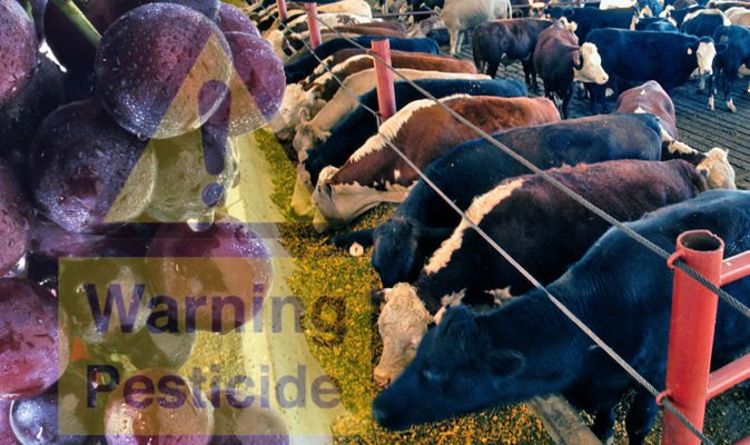 Europe takes a cautionary approach when it comes to meat and animals must be deemed safe before they can be sold. However in the US, they take a different approach where it must be proved to be dangerous before it’s banned.

However, it isn’t just beef Brits should be worried about because standards in the US are also very different when it comes to pork.

The American pork industry is a £23.4billion a year industry with over 78 million pigs being raised indoors within the country.

With over nine million pigs in North Carolina alone, these animals are kept in crates so small that they can’t turn around.

The animals are then sprayed with chemicals to kill bacteria which is also illegal in the UK.

Food poisoning rates in America are four times higher than in the UK due to this cross contamination.

With many thinking that fruit must be safe, the programme shared some worrying statistics about grapes.

The Channel 4 show revealed that grapes in America are filled with 1,000 percent more insecticides than they are here.

An expert of the programme explained that washing fruit will not help get rid of any of these chemicals as they are injected directly into the body of the plant.

Some of these pesticides are extremely hazardous and could be a risk to human health.

Organically grown fruit cannot be treated with any pesticides but this is rare to find in American produce and can come at a much higher cost.

Other foods that could reach our supermarket according to the programme shelves include biscuits, milk, bread and fizzy pop, all of which contain harmful chemicals which are banned in the UK.