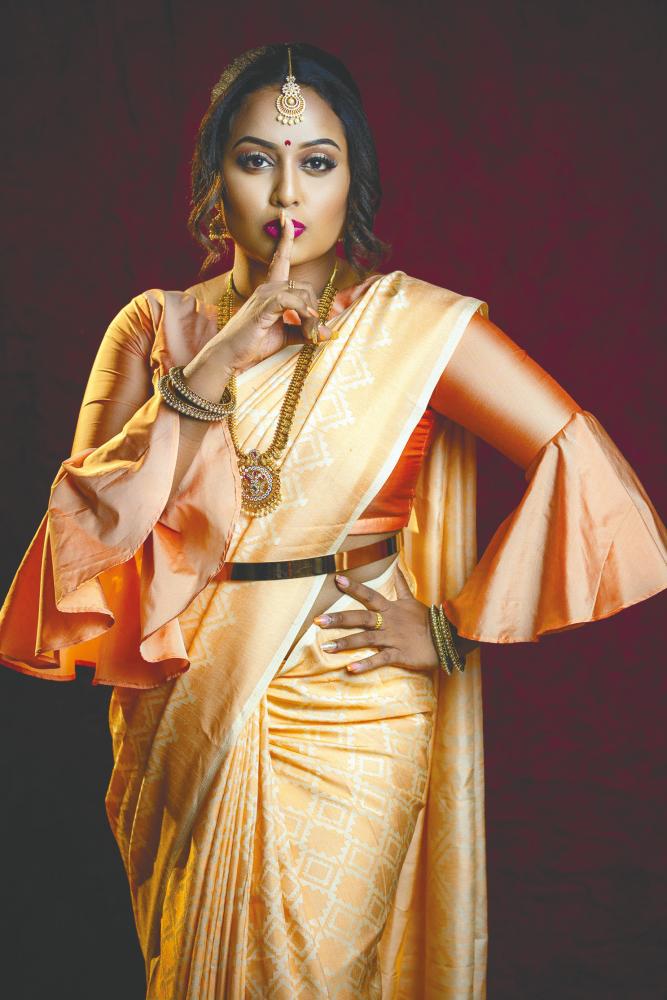 LAST year proved to be a good one for TV host and actress Hemalata Gnanaprakasam, popularly known as Hema Ji.

The 28-year-old lass walked away with two trophies at the 2019 PAAIM Johor Awards. The first award was for Best Actress in a Supporting Category for her performance in Thirudathey Papa Thirudathey under the direction of Shalini Balasundaram. She also walked away with the Public Choice award.

She also bagged the award for best actress at the Malaysian Indian Cine Awards for her performance in the TV drama Ilamai Ithoi Ithoi where she played an unwed mother. At the same function, she also walked away with the Best Diva award. To date she has acted in three movies and seven TV dramas.

What are your upcoming projects?

“I have completed shooting the 26-episode TV series Tamiletchummy under the direction of Dr Vimala Perumal. There are three main female characters in the show, and I am playing one of them.

“[My character is] a woman who tries to balance between her career life and her family life. The show focuses on women’s voices. It might be shown on television at the end of the year.”

Tell us how your journey in the entertainment industry began.

“I was a staff nurse in a Singapore hospital. I was earning good money. I loved my job. But my passion lay in the entertainment world.

“I wanted to be an actress. So, after two years, I left my job in Singapore, and returned to Kuala Lumpur to pursue my dream.

“A lot of people thought I was taking a big risk leaving a well-paying job and jumping into an industry that does not guarantee a secure future. But I believe you only live once, and you should pursue your dream at all costs.

“I went for audition after audition. My first break in the entertainment scene was hosting a magazine TV show called 360 Degrees.

Why did you want to be in the entertainment field?

“Since young I loved acting, dancing and hosting. I took classes in Bharatanatyam when I was eight years old. But I stopped my classes at age 12. My parents wanted me to fully focus on my studies. They did not want the dance class to distract me.

“But even as I was studying, I still took part in dance shows and dance events. I [performed] all kinds of dances … When I was 20, I even participated in a popular TV reality dance show, Maanada Maayiladdam in Chennai, India. I stayed in Chennai for three months. I [managed to reach] the semi-finals.”

Which project are you most proud of?

“Two years ago, I co-hosted a travelogue show on Astro Ulagam called KL to KK. I travelled all over Malaysia on various motorbikes.

“I had never ridden a bike before. So I learned how to ride a bike from a friend. I had to ride Kawasaki and Harley Davidson bikes.

“I got a lot of compliments from viewers, including guys, for daringly riding a bike all over Malaysia.”

I heard you have started your own business. Tell us more about it.

“I have started an online boutique called Treadswala, selling Indian traditional clothes for women and men.

“Most online boutiques focus on women’s attire. But I am different. My focus is more on men’s attire, especially kurtas. I want to give more choices to men.

“In future I want to expand to include western clothes, as well as attire from other [cultures]. I want to make my online boutique more multiracial.”

Where will we see you five years from now?

“I want to do more social work. I would like to start a home that focuses on underprivileged children. I want to provide them with education. Young minds are the future of the country.”

What is your philosophy in life?