The Eagles in concert: 20,000 fans rock at the Hotel California 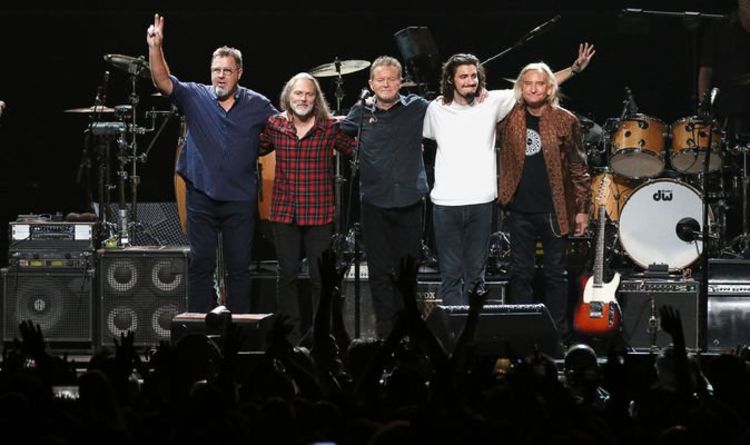 The Eagles have always had an imperial dimension, a self-confidence which could seem downright cocky if they weren’t so blooming brilliant. When you’ve been one of the biggest rock bands in the world for almost half a century and defined an era – late 1970s American rock – there’s no point in false modesty.

The Eagles have always had an imperial dimension, a self-confidence which could seem downright cocky if they weren’t so blooming brilliant.

When you’ve been one of the biggest rock bands in the world for almost half a century and defined an era – late 1970s American rock – there’s no point in false modesty.

So the big, brassy notion of going on tour performing the entire album (with not even a support band), “followed by an additional set of greatest hits” plus a choir and full orchestra is one that will make every fan roll over and purr.

A gaunt man in a cape came on stage, took the record from its sleeve and put Hotel California on a turntable.

It was straight down to business with the title song – Don Henley sitting at the drum kit in white shirt and black waistcoat, like the stern family patriarch singing: “On a dark desert highway, cool wind in my hair”.

The lurid sky swirled behind the band (it’s a wonderful show visually), as if seen through the windows of the hotel.

“You can check out any time you like but can never leave.” Surely one of the most ominous lines every written in a pop song.

What does this potent, elusive song mean?

Something about decadence, hedonism, the loss of innocence and the delicious dark side of the American Dream.

But we don’t need to be too precise.

They line up on stage like the Magnificent Seven (unless Don’s on drum duty), poised with guitars like the gods of rock that they are.

Their stage act is a marvel of precision.

Yet for all the disciplined professionalism, the songs – and those majestic harmonies – sound as fresh as though they’d been newly pressed.

Vince Gill sang New Kid before the band plunged into Life in the Fast Lane with its hammering guitar riff, followed by Don singing Wasted Time, his voice as urgent as ever.

Observing the conceit that we were hearing the album, a Fifties cigarette girl with the longest legs in the world came on stage and turned the record over.

The orchestra finally materialised (it’s used sparingly but effectively) in The Last Resort, along with the choir in cassocks.

Then it was the interval, after which Don promised “we’re going to come back and play everything else we know”.

He was as good as his word.

My favourites: Take It To the Limit (Vince Gill leading vocals); Witchy Woman (the powerful horn section burst into life); Lyin’ Eyes; Don Henley’s beautiful, fluid song about ageing, Boys Of Summer, written during his divorce from the Eagles in the 1980s; Joe Walsh – always looking as though he’s staggered from a war zone – on Life’s Been Good.

Twenty-two numbers in all and a final reprise of Hotel California before Don sent 20,000 tired but happy people home.