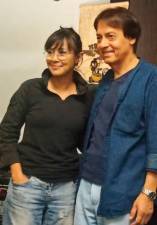 But this time, instead of dueting with Fran (otherwise known as local music legend Francissca Peter), Roy has teamed up with veteran singer Fauziah Latiff on the songs Tanpa Noktah and Suka Suka.

Speaking to theSun from Perth, Australia where he now resides, Roy said: “I wanted to come back to Malaysia and end my career on a high.”

He added that he was grateful to be able to work with Fauziah, who had become a sensation on her own since they last worked together during the 1980s.

“Before I moved to Australia, I produced Fauziah’s first album Digamit Memori when she was only 17, in 1987.

“It was one of the last projects I did before leaving, and I felt it was only apt that I return to sing with her,” he said.

The first song, a ballad named Tanpa Noktah, was written by lyricist Habsah Hassan, who Roy has been working with since the ‘80s.

“The ballad is all about love and missed chances,” he said.

Meanwhile, Suka Suka, written by Slen Fadzil, is a little more upbeat and speaks more on freedom and following your dream, Roy said.

The songs were released on Sept 18, and are available for download on digital platforms Apple Music, Spotify and more.

Roy had initially returned to Malaysia earlier this year to participate in the Musicians for Musicians Benefit Concert 2020, which was indefinitely postponed from its original date of March 15 due to the Covid-19 pandemic.

However, the cancellation of the event gave Roy the opportunity to record the songs with Fauziah.

Speaking on his prolific music career in Australia, Roy said he has managed to stick to his roots, supported by a large Malaysian diaspora in the country.

“My style has not changed much, I’m still playing the kind of music I played in Malaysia.

“We have a very big Southeast Asian presence in Western Australia, because they all come from Malaysia and Singapore, so their taste is more or less the same.” – by Keertan Ayamany