The Falcon and the Winter Soldier shooting cancelled 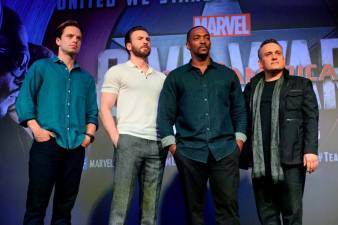 CAST and crew working on the Avengers spin-off have been instructed to return to Atlanta, where most of the series has been shot, reports Deadline.

As it stands, the release date for the show, which is due to land on the Disney+ streaming platform in August, has neither been postponed or officially confirmed.

The impact of the COVID-19 virus on on-location shooting continues to grow. With the cancellation of its shoot in Prague, the Disney series The Falcon and the Winter Soldier is the latest in a long list of productions suspended because of the virus. Staff on the project will now return from the Czech Republic, where the government is shutting schools and universities and banning sports, cultural and religious gatherings in a bid to prevent an epidemic.

Deadline reports that the film crew was told to return to the Atlanta studios, where they had been working for months before traveling to the central European country. The crew had begun filming for the week-long shoot in the Czech capital on March 6 before finally packing their bags.

For the moment, there is no indication that the date of the series’ release on the streaming platform will be affected.

Due to release in August on the Disney+ platform, The Falcon and the Winter Soldier series, which is set in the Marvel Cinematic Universe, has not had much luck with its choice of locations.

The Disney+ production already had to suspend shooting in Puerto Rico in January of this year, when a state of emergency was declared in the country in the wake of an earthquake swarm.

Produced by Marvel Universe producer, Kevin Feige, the story of The Falcon and the Winter Soldier follows on from Avengers: Endgame, in which Steve Rogers aka Captain America decides to retire, leaving his legendary shield in the hands of his most faithful ally, Sam Wilson.

The series follows Wilson in his bid to become the next Captain America.

Actors Anthony Mackie and Sebastian Stan will reprise their respective roles as Sam Wilson aka the Falcon and the Winter Soldier aka Bucky Barnes. Daniel Brühl, Emily VanCamp and Wyatt Russell also feature in the cast. – AFP