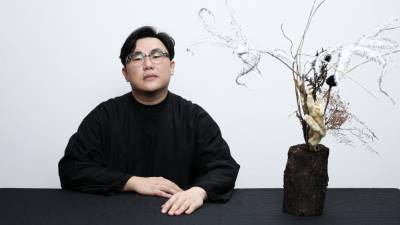 THERE is something about watching delicate flowers burst into full bloom, and then slowly drooping, withering away and dying. It’s a very strange interest, indeed.

Some flowers maintain their pristine and fresh appearance for weeks on end, while others, like the morning glory, bloom and die within the same day. But has the short lifepan of flowers been able to teach us to appreciate the beauty and mortality of life, even on the tiniest scale?

Well, floral artist Joshua Tan’s botanical works of art are the embodiment of this perishable splendour, extending beyond a flower’s point of perfection.

Tan’s floristry studio ZaHuoHang – which means ‘grocery store’ in Mandarin – is far from your run-of-the-mill floral shop. Rather than merely arranging luscious fresh blooms into simple arrangements, what Tan does is quite the opposite, turning them into works of art.

His unorthodox floristry utilises artful arrangements of dried flowers and leaves to highlight their temporal nature, while still honouring their fleeting beauty.

He shared: “The mostly withered flowers I arrange are a rebellion against the idea that beauty only exists insofar as there is life. Flowers’ ever-changing nature holds a type of beauty that is difficult to categorise.

“Their beauty is timeless, neither determined by life nor death.

“That is why I shape my flowers to bring about an immersive experience because no one knows what being timeless feels like; hence, this could possibly be the [best way to show them].”

Playing on the idea of extending and continuing life after death, Tan anticipates the impending prospect of death falling upon the flowers as they reach the end of their lifespan.

He is interested in the more realistic representarion of flora and foliage, rather than romanticised ideals.

“My fascination for dried and wilted flowers has always piqued my curiosity. I like how ageless and unearthly they are.

“When the flower dries, it naturally curves into an irreversible form, which is when I begin to work with the shape itself to create a mesmerising scenic composition rife with subtle colour, yet rich in texture.”

Tan believes there is no form more graceful than natural undulated curves, and no shape more organic than that of the flowers and leaves themselves. No matter the combination of floral specimens Tan puts together, all elements intuited in his work – volume, texture, colour, pattern – merge into something that suggests art imitating life.

From the start, Tan has shown confidence in experimentation and conceptual depth through the spontaneity of his floral arrangements, breathing new life into withered plants.

In his rustic and often monochromatic floral arrangements, minimalist colour is layered with maximalist texture, and softened by poetic intentions to create a sense of quiet drama.

“I love imperfections and oddities when arranging a bouquet, as opposed to a neat and tidy approach. Flowers are wild and are meant to be seen as such,” he added.

Tan often quotes the late 20th century American author and essayist Edward Abbey’s poetic text as the abstraction of his emblematic work: “I hold no preferences in among flowers, so long as they are wild, free, spontaneous.”

Tan explained: “It resonates with me because it’s the perfect description of how I arrange my flowers.

“I do not confine myself to a certain structure as I believe flowers need to be wild to be free. That said, I love all kinds of flowers, as they are special in their own right.”

However, his all-time favourite bloom, the Banksia Pod, isn’t quite a flower per se but a cone-shaped seed pod that is native to Australia. Its unnatural yet distinctively strong character makes it even more strange and mysterious, exuding an other-worldly disposition.

Other than being a florist, Tan also assumes the role of an artist as he transforms open and controlled spaces into immersive, site-specific floral art installations and exhibits.

In many of his explorations, he pushes compositional boundaries in an attempt to capture the beauty of flowers as three-dimensional still-life subjects.

He says: “Generally, anyone could be an artist by virtue of doing art. I like to think of myself as a storyteller for the silenced flowers. There are so many stories left untold with various angles to explore, and I’d love to unearth those stories and see things differently.”

His most recent collaboration, with local footwear designer Nelissa Hilman, resulted in Re-, a floral art installation within a retail space, with flowers hanging down from the ceiling as though they were suspended in time.

“The creative process is very much abstract in the most poetic ways Nelissa and I could exert. The narrative is one of timelessness, and yet the stillness of the rocks and flowers were very much able to whisper secrets of the past and future.

“In the space of being timeless, healing can begin, and privacy can be attained in the most sacred of ways.”