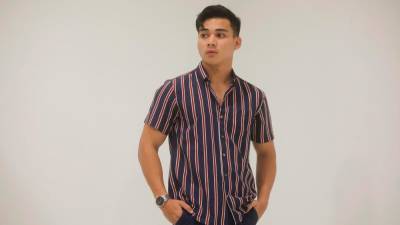 ACTOR Atiq Azman is a good son. He is determined to keep his mother happy. Indeed, his mother is his most precious treasure.

The 19-year-old lad, who was born in Kelantan and raised in Kuala Lumpur, says: “My mother raised me to be a good Muslim boy. She sent me to a Muslim religious school. When I wanted to be an actor, she advised me that I should not forget about my Islamic values.”

This is part of the reason why he refuses to act out intimate scenes with his co-stars onscreen.

He said: “I can play romantic roles. But I will not touch my female co-stars. I want my mother to be comfortable seeing my performance on television. I do not want to do anything that will embarrass my mother.”

One would think that this would greatly limit his acting roles, and indirectly affect his chances for success. But that did not happen. He is still very much sought after.

His journey to stardom began unexpectedly. He was first discovered when he was helping out at a small stall that was famous for serving sotong goreng tepung (fried squid).

His father was a driver while his mother ran a small food stall. Atiq, the eldest of four siblings, wanted to earn some extra pocket money so he decided to join the entertainment industry.

“I wanted to travel and see the world. I thought being a pilot would make my dream come true.

“Who knows, maybe one day, I may play a pilot in a television series, and at least that way, I would make my childhood dream a reality.”

His first role on television was as an extra, with no speaking lines. In 2018, he got his first speaking role in the TV series Nur, playing a supporting character named Amirul.

The series became a huge hit, and his character became somewhat popular with audiences.

He was signed on for a second season of the series, and his role was expanded, giving him more dialogue and screen time.

Since then, he has appeared in a handful of television series and dramas in the lead role.

Of course, the road to fame has not been all smooth sailing.

His fame has caused some untrue stories about him to be circulated. For example, he was involved in a motorbike accident in early September. Luckily, he did not sustain any serious injuries. Yet some parties have accused him of speeding.

“I was not speeding,” he said. “Accidents can happen even to the most careful drivers.

“One of the best advice I got from my family and my friends was that I should learn to stop [paying attention to] untrue stories about me.”

Another unfortunate incident occurred when he attended an entertainment event, and some fans shouted out his name.

“The next day, some of my fans were saying on social media that success has changed me, and made me arrogant. But in reality, I am really shy. If you approach me personally, I can be friendly. I am working hard to shed my shyness.”

When he is not working in front of the camera, you can find him at the gym working out and building his stamina. “I spend two hours in the gym daily,” he says.

He also uses his free time to review and dissect his own performances. “I still find myself stumbling over my dialogue,” he confesses. “I need to improve my dialogue delivery.”

At the end of the year, Atiq will be shooting his first feature film.

“I am not at liberty to say anything more about the film and my role, except that it is a horror film,” he says.

“There is some ‘naughtiness’ to my character. I am really eager to step into the film world. I fully understand that film and television are two different mediums, and you need different sets of skills to be a television actor and movie actor.”

He is extremely grateful to his management company OneChinoz Studios Sdn Bhd for helping him improve his craft. A year ago, the company arranged for him to take an 18-week acting course.

There are also plans for him to take communication and English classes.

In the past, he had received several offers to act in a Singapore television show.

But he was not fluent in English at the time, so he had to reject the roles. He does not want to lose any more roles because of his handicap in English, or any other language.

In fact, his management company even has plans for him to penetrate the Indonesian film scene in the near future.

Facebook
Twitter
Pinterest
WhatsApp
Linkedin
ReddIt
Email
Tumblr
VK
Previous articleIntroducing Inner Nature: The Powerhouse Duo to Support Balance of Mind, Body & Spirit Amidst the Chaos of 2020
Next articleExperts Watch in Horror as 2 Dead Satellites Are on Track For a Potential Collision