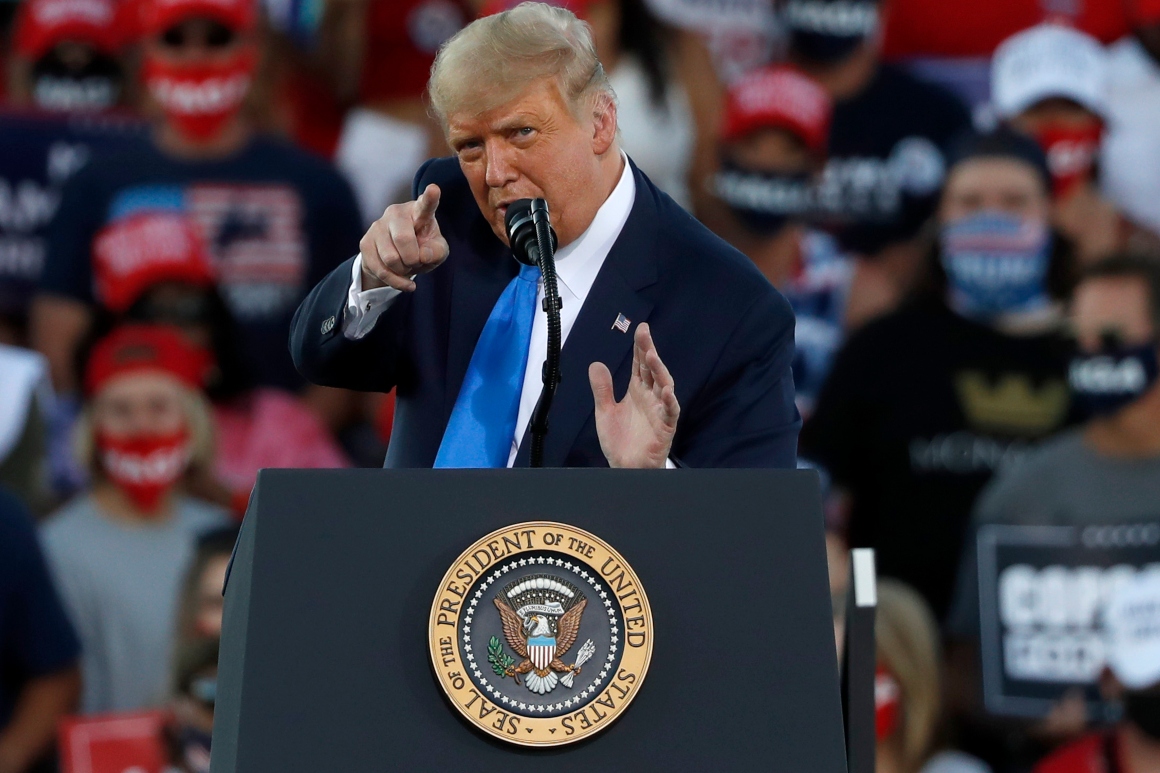 There is uncertainty about the accuracy of polling in certain swing states, the efficacy of GOP voter suppression efforts and even the number of mail-in ballots that for one reason or another will be disqualified.

With Biden ahead in both the polls and fundraising and Trump’s message all over the place, things aren’t looking great for the president’s reelection efforts. But that doesn’t mean the campaign is over yet.

“There are more known unknowns than we’ve ever had at any point,” said Tom Bonier, CEO of the Democratic data firm TargetSmart. “The instruments we have to gauge this race, the polling, our predictive models … the problem is all those tools are built around quote-unquote normal elections. And this is anything but a normal election.”

On a recent video call with Democratic Party state chairs, Bonier laid out an overwhelmingly positive electoral landscape for Biden. But he cautioned that even small variations in turnout projections could have a substantial effect on the outcome. For that reason, among others, Democrats are poring over early vote totals, circulating anxiety-ridden campaign memos and bracing for a long two weeks.

“We don’t know what insanity Trump will hurl into the mix,” said Matt Bennett of the center-left group Third Way. “Every day is a week and every week is a month. It’s going to feel like a long time between now and November 3rd.”

Of all the reasons for Democrats to be uncertain, the most worrisome for the party is the one that — for now — is going very well for them: Turnout. More than 27 million people had already voted nationwide as of Sunday, some after standing in line for hours, according to data compiled by the United States Elections Project. In states that report returns by party, Democrats are returning more ballots than Republicans. Republicans and Democrats alike believe early voters in other states lean Democratic, as well.

But political professionals don’t know how great an advantage Democrats will build in the early vote — or whether it will be enough to overcome the wave of votes that Republicans are expected to cast in person.

Flagging “clear warning signs” for Biden, one prominent strategist circulated a memo among Democrats earlier this month citing increasing registration of white, noncollege educated voters — President Donald Trump’s base demographic — in Pennsylvania, Wisconsin and Michigan. There is no precedent for Trump overcoming such a large polling deficit this close to the election, the strategist wrote. “And yet … ”

For Democrats, uncertainty about who is voting is only part of the equation. It’s also unclear how many mail-in ballots ultimately will be rejected, and in which states.

It’s no small matter. After the Pennsylvania Supreme Court ruled last month that so-called naked ballots — those mailed without a proper envelope — could not be counted, elections officials warned more than 100,000 ballots could be invalidated. That is more than twice the margin by which Trump beat Hillary Clinton in the state in 2016.

Republicans in other states have had some success in court preventing mail ballots that arrive after Election Day from being counted. A Biden victory may hinge on not only persuading Democrats to continue voting in the next two weeks — but to ensure they do so correctly.

There is uncertainty, especially, about younger voters, who are returning ballots at a slower rate than older ones. That is typical, wrote Michael McDonald, who directs the Elections Project, in an analysis of the early vote last week.

Still, he said, “I predict in the coming weeks the Democratic narrative will change from euphoria over the apparent large leads in early voting to concern that a disproportionately large number of younger voters have yet to return their mail ballots.”

In any other year, Democrats would have a time-tested, if imperfect way to address their turnout concerns — thousands of volunteers and organizers knocking on doors to register voters and prod them to return their ballots. But Biden abandoned a door-knocking campaign due to concerns about the coronavirus until the final month of the election, ceding traditional field operations to Trump.

The effect that decision will have on the outcome will be impossible to fully quantify until the election is over. But it is one likely reason that Republicans have been able to make registration gains in several states, including Florida, where the GOP has significantly narrowed the party’s voter registration gap with Democrats.

“One big known unknown right now is how many Democrats return their ballots,” said Nick Trainer, the Trump campaign’s director of battleground strategy. “In ‘16, you would have had a Democrat volunteer or operative knocking on a voter’s door in Orlando reminding them to return the ballot on their kitchen table or go to the polls. That’s not happening today.”

Many Democrats will go to the polls, of course. But what they may find there is another source of concern for Democrats. Democrats are spending millions of dollars on voter education and voter protection programs. But in his debate with Biden, Trump called on “my supporters to go into the polls and watch very carefully,” which was taken by some partisans as a call to arms.

Mathew Littman, a former Biden speechwriter who was helping to organize a phone bank for Biden last week, said, “I worry about turnout. I worry about people being threatened when they go to vote. I worry about these gangs of roving militias.”

One reason that political strategists are focusing so heavily on the mechanics of the election — including turnout and vote counting — is that little else is likely to alter the course of the campaign. Republicans have all but abandoned hope for a dramatic turnaround on the coronavirus or for a burst of good economic news. The election is still the referendum on Trump that it was six months ago, and Trump is losing.

Polls suggest Trump will need every uncertainty to break his way to win a second term. But there is some uncertainty even about that. Trump cannot rely, as many of his supporters do, on a blanket repudiation of public polls. Pollsters of both parties say they are more carefully accounting for white, noncollege educated voters some surveys missed in 2016.

Yet many Democrats continue to suspect so-called quiet or shy Trump voters still exist — those who refuse to tell pollsters they support a deeply polarizing president. Many Republican Party leaders, especially at the local level, are convinced of it.

In addition, while Trump is behind in critical states, he is close to or within the margin of error in many of them. And that’s “after a f—ing historically awful year,” said Jeff Roe, the Republican strategist who steered Ted Cruz’s 2016 presidential campaign.

For Trump, he said, “The path ain’t closed.”

It is possible that the race is already cooked. To this point, nothing has changed the basic equation — and that includes a pandemic, a disastrous first debate and Trump’s hospitalization for a coronavirus infection. Ken Martin, chair of Minnesota’s Democratic-Farmer-Labor Party, said one reason he is confident “is just how steady the race has been.”

Still, the election four years ago shifted significantly in the final weeks. Acknowledging “a little bit of PTSD from 2016,” Martin said, “You never know what type of issue could move the electorate” in the final days.

For Democrats, there is no political price to pay for projecting caution, which can help to avert complacency among donors and potential voters. Jen O’Malley Dillon, Biden’s campaign manager, wrote in a memo to supporters on Saturday that “the reality is that this race is far closer than some of the punditry we’re seeing on Twitter and on TV would suggest. In the key battleground states where this election will be decided, we remain neck and neck with Donald Trump.”

What is different about 2020 is that in any other presidential election it might not feel that way.

Looking at the polling alone, said Bonier, of TargetSmart, “you’d feel very confident, very confident. … You would just be thinking of the extent of the landslide.”

This year, Bonier said, he would “rather be us than them.” But his outlook was as wary as that of many other Democrats.

“It’s just that nagging question of uncertainty,” he said.