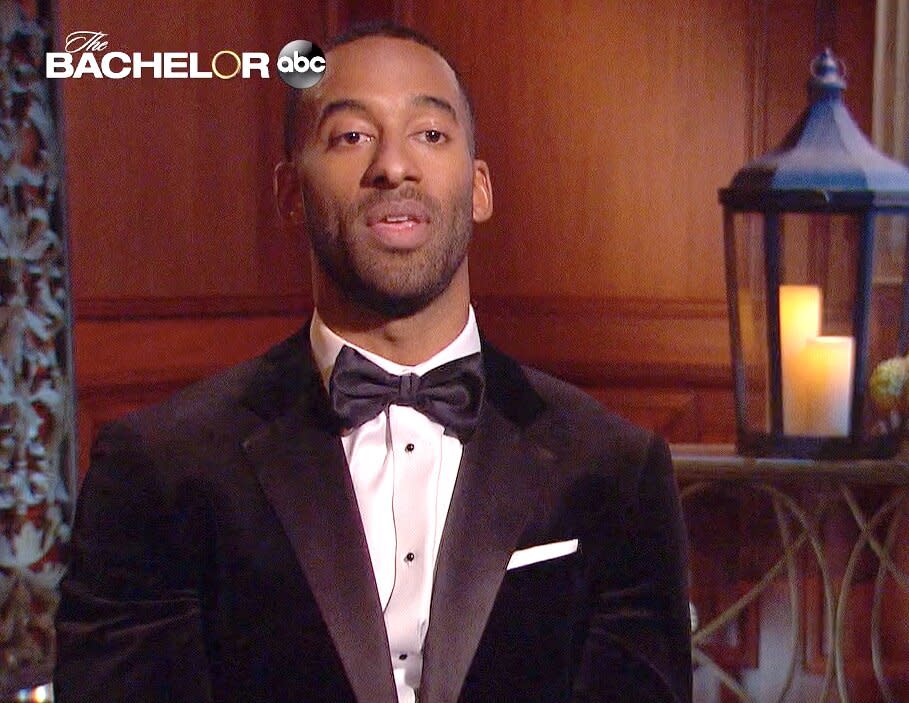 The It List is Yahoo’s weekly look at the best in pop culture, including movies, music, TV, streaming, games, books, podcasts and more. During the coronavirus pandemic, when most of us are staying at home, we’re going to spotlight things you can enjoy from your couch, whether solo or in small groups, and leave out the rest. With that in mind, here are our picks for Jan. 4-10, including the best deals we could find for each.(Yahoo Entertainment may receive a share from purchases made via links on this page.)

WATCH IT: The Bachelor kicks off its historic season with Matt James

James, who was initially cast as a contestant for Clare Crawley’s season of The Bachelorette, is the show’s first Black bachelor in its 18-year run. ABC announced Tyler Cameron’s BFF would be the lead for Season 25 amid the Black Lives Matter movement as the franchise was called out for its diversity problems. James may not be too well-versed in Bachelor Nation — yet — but you wouldn’t know it. There are tears, ab-shots, hot tubs and more Bachelor staples in previews of the upcoming season. (Apparently, the drama is un-Matt-ched.) Since James’s quest to find love was shot in a quarantine bubble, viewers have seen the last of La Quinta, Calif. This season of The Bachelor was shot at Nemacolin in Farmington, Pennsylvania. — Taryn Ryder

STREAM IT: Steel yourself for the heartbreaking Pieces of a Woman

She dazzled as a young Princess Margaret on The Crown, and now Vanessa Kirby is considered a shoo-in for an Oscar nomination for her devastating performance as a woman grieving after her home birth ends tragically. (Co-star Shia LaBeouf’s supporting turn as her anguished husband has also been praised, though Netflix has quietly pulled him from its “For Your Consideration” awards campaign in the aftermath of ex-girlfriend FKA Twigs’s lawsuit alleging sexual battery, assault and infliction of emotional distress.) A gut-wrenching exploration of grief directed by Kornél Mundruczó and executive-produced by Martin Scorsese, the indie drama and festival favorite isn’t an easy watch, but it’s a powerful one. — Erin Donnelly

Pieces of a Woman premieres Thursday, Jan. 7 on Netflix.

STREAM IT: Meagan Good co-directs and stars in the new drama, If Not Now, When?

Actresses Tamara Bass and Meagan Good joined forces for their independently financed directorial debut, If Not Now, When? about four high-school friends who try to hang onto their relationship years later in the face of adult challenges, from adultery to single motherhood. Meanwhile, Good’s Tyra is dealing with a serious drug dependency that’s already jeopardized her relationships with her partner and their teenage daughter, Jillian, played by Lexi Underwood — breakout star of the Hulu series Little Fires Everywhere. In this exclusive clip from the film, Tyra’s friends encourage her to continue with rehab, even as Jillian is skeptical that her mother truly understands the ramifications of what she’s done. “This wasn’t just a blip; I had to give you mouth-to-mouth,” the anguished teen cries, just as her mother slaps her across the face. It’s going to take more than apology to put that particular fire out. — E.A.

If Not Now, When? premieres Friday, Jan. 8 on Digital and VOD services including FandangoNOW and iTunes.

WATCH IT: Scrub in with NBC’s Nurses in the show’s new post-This Is Us timeslot

Canada’s answer to Grey’s Anatomy made its stateside debut on NBC in early December. But when the series returns on Jan. 5, it’ll nab the valuable Tuesday at 10 p.m. timeslot after the network’s blockbuster drama This Is Us. Filmed on location in Toronto before the COVID-19 pandemic, Nurses follows five members of a hospital nursing staff as they face a bevy of medical challenges ranging from everyday accidents to more life-threatening cases. When they’re not on the clock, they try — and sometimes fail — to have some semblance of a private life. This exclusive clip from the Jan. 5 episode finds one of the nurses, Ashley (Natasha Calis), checking in on a patient after-hours only to learn that she passed away. Suddenly, her evening plans are off the table and she drowns her sorrows in another round. Already a big hit in Canada, Nurses seems poised to benefit from its This Is Us bump. — E.A.

STREAM IT: Hilary Swank is fatally attracted to Michael Ealy in the new thriller Fatale

First there was Fatal Attraction. Then there was Obsessed. Now here comes Fatale, another story of a married man (Michael Ealy) who has an affair with the wrong woman, played by two-time Oscar winner, Hilary Swank. But this time, there’s a twist! Swank’s temptress, Valerie Quinlan, turns out to be a cop and uses the affair to pursue her own agenda: regaining custody of her daughter. Meanwhile, Ealy’s Derrick Tyler just tries to stay out of her way… until he has to take the law into his own hands. But we’re getting ahead of ourselves. This exclusive clip from Fatale shows how this particular fatal attraction begins, with a chance meeting between Valerie and Derrick in a Las Vegas nightclub that’s underlined by simmering sexual tension. Get a room, you two! (Spoiler alert: they do.) — E.A.

STREAM IT: Add the History of Swear Words to your curriculum

Don’t worry, this isn’t anything like those history classes from your school days. It’s more in line with Drunk History, with the awesome Nicolas Cage as your host. Experts in pop culture and history weigh in, too, on how we came to use the words we generally avoid when speaking around our grandmother: f***, sh**, b***ch… you get the picture. Some comedy favorites, including Sarah SIlverman, Nick Offerman, Nikki Glaser and Jim Jeffries, provide the commentary. — Raechal Shewfelt

STREAM IT: Hailee Steinfeld seeks poetic justice in the second season of Dickinson

Before she joins the Marvel Cinematic Universe in the upcoming Hawkeye series for Disney+, Hailee Steinfeld has unfinished business in the Classic Poetry Universe. The actress reprises her role as 19th century poet Emily Dickinson in Season 2 of AppleTV+’s Peabody-winning comedy, which follows in the tradition of Sofia Coppola’s Marie Antoinette by bringing a modern sensibility to the traditional period piece. The show’s ace supporting cast — including Jane Krakowski, Toby Huss and Wiz Khalifa as the coolest Grim Reaper ever — are all back, and new faces this season include Nick Kroll as Edgar Allen Poe and Timothy Simons as Frederick Law Olmstead. If you’ve binged Ted Lasso on repeat, it’s time to see what Dickinson is all about. — E.A.

“Why would you take a group of women in a sport that’s wildly popular and make a decision to pay them far less than minimum wage?” DeMaurice Smith, executive director of the NFL Players Association, says in A Woman’s Work: The NFL’s Cheerleader Problem. “Because they can. And until somebody stops them, they will.” The latest installment of PBS’s award-winning documentary series follows two women who fought the powerful National Football League over the issue of pay — or the lack of it — and how it affected them and their families. One of the women’s husbands explains that, in one instance, not only did his wife not get paid for an out-of-town event, but it cost them gas for her vehicle to get there and any salary he would have made that day; He had to take off work to care for their child. Still, as depicted here, the women faced pressure from their colleagues and fans to drop their call to earn as much as the concession workers at the games where they cheered. — R.S.

Kieran, dim the lights! First Paula Abdul returned to Fox on The Masked Dancer, and now her fellow original American Idol judge, Randy Jackson, is following suit as the band leader on Fox’s reboot of the iconic musical game show Name That Tune. Both guessing-game programs will air on Wednesdays, back to back, and this will be some nostalgic television, dawg — we just wish Fox had hired Brian Dunkleman to host these shows! But new Name That Tune emcee (and Fox/Ally McBeal alumnus) Jane Krakowski is sure to do a great job. — L.P.

Name That Tune premieres Wednesday, Jan. 6 at 9 p.m. on Fox.

The long-awaited second studio effort from the controversial country bad boy, Dangerous: The Double Album, is an ambitious, 30-song affair that effectively puts the focus back on the Country Music Association’s 2020 New Artist of the Year winner’s talent. — L.P.

WATCH IT: The stars come out for Celebrity Wheel of Fortune

Pat Sajak and Vanna White won’t be the only recognizable faces on this primetime version of the long-running game show. They’ll be joined by Supermarket Sweep host Leslie Jones; Beverly Hills, 90210 alum Jennie Garth; Grey Anatomy’s Chandra Wilson; Chrissy Metz from This Is Us; The Bachelor host Chris Harrison; Paul “Pee Wee Herman” Reubens and many more. Each celeb will spin the wheel in the hopes of winning $ 1 million to donate to the charity of their choice. — R.S.

Following the shocking drug-overdose 2020 death of his son, Justin Townes Earle, Americana legend Steve Earle and his band the Dukes reprise 10 of Justin’s songs on J.T. The elder Earle also includes a heartbreaking original, “Last Words,” which notes that the final words between the father and son were “I love you.” One-hundred percent of the artist advances and royalties from the album — released on Jan. 4, what would have Justin’s 39th birthday — will be donated to a trust fund for Justin’s 3-year-old daughter, Etta. — L.P.

— Video produced by Jon San and edited by John Santo