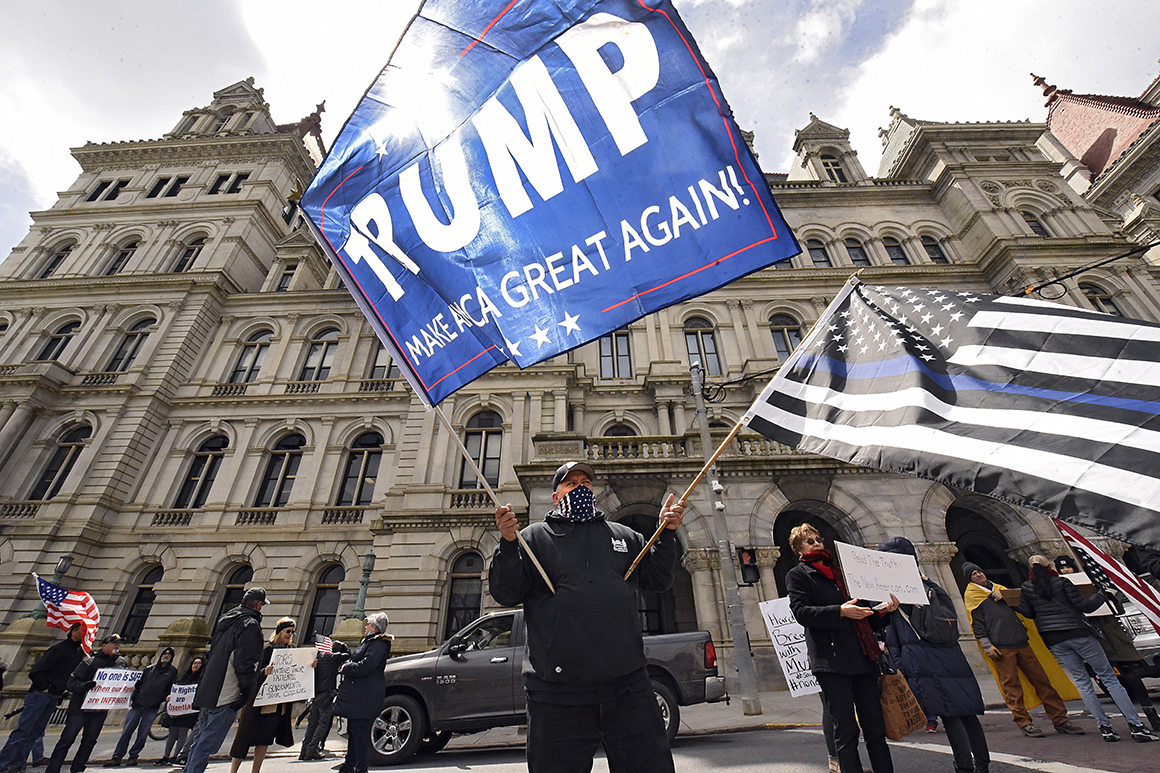 The libertarian-leaning Koch political network, founded by brothers Charles and David Koch, rose to prominence by funding the tea party protests a decade ago, when taxpayers outraged by an economic stimulus bill and President Barack Obama’s health care plans embraced combative tactics in town halls and protests — and remade politics for years to come.

Now, as another recession looms and concerns about government overreach and civil liberties are causing some conservatives to take to the streets, the Koch network is explicitly rejecting the in-person protests.

Americans for Prosperity — the main political arm of the Koch family — decided not to join some of its former collaborators from the tea party movement, such as FreedomWorks, in embracing the protests and is helping to organize them online.

The move reflects a dramatic shift in tactics within the network, which in the past has spent hundreds of millions of dollars a year on political action. It also demonstrates how the grassroots activist wing of the Republican Party — which was once funded and largely molded by the Kochs — has veered away from the small-government priorities of an earlier era. Now, much of the take-to-the-streets anger channels President Donald Trump’s skepticism of the kind of expertise that lies behind the coronavirus shutdowns.

“The question is — what is the best way to get people back to work? We don’t see protests as the best way to do that,” Emily Seidel, CEO of Americans for Prosperity, said in a statement. “Instead, we are working directly with policymakers to bring business leaders and public health officials together to help develop standards to safely reopen the economy without jeopardizing public health. The choice between full shutdown and immediately opening everything is a false choice."

Though the number of protesters against social distancing has been relatively small so far, the mere existence of a tea party-like movement has been an awkward subject for Koch leaders, multiple people affiliated with the network told POLITICO. By not backing the protesters, they said, the Koch network risks alienating some of its longtime donors, who want to see it embrace the economic argument for reopening the country, as well as conservatives who are beginning to line up in favor of rolling back stay-at-home rules.

But leaders like Seidel did not believe that rejecting the approach of public-health experts made sense.

Some people involved with the Koch network attributed the decision to reject the grassroots protests to a surprising reason: dissatisfaction with the outcome of the tea party protests.

But in the end, some top Koch network officials concluded that the network didn’t make enough gains from the tea party movement for the combative approach to be worthwhile. In particular, grassroots conservatives largely abandoned the goal that was once the backbone of their movement — dismantling Obamacare — after Trump came into office. New, more populist priorities, like curbing immigration, supplanted the small-government message of the Kochs.

“I think there’s been a lesson,” said Frayda Levin, a board member at Americans for Prosperity. “We saw what we wanted in the tea party. It didn’t work out like we’d like. And now we’re much more practical.”

By steering away from combat and embracing an under-the-radar approach, the Koch network sees opportunities during the current crisis to make headway on one of its most prized objectives: dismantling the government regulation that they feel drives up the costs of health care and pharmaceuticals.

States and the federal government have started temporarily waiving a range of health care rules in order to give hospitals and doctors more leeway to treat patients during the pandemic. The Koch network has quietly lobbied for those changes in many states, and in the coming weeks and months plans to launch paid advertising and digital events to build its case.

The changes the Koch network advocates include allowing pharmaceutical companies to market drugs for off-label uses before they’re approved, a notion conservatives have dubbed “Free Speech in Medicine,” relaxing licensing rules so doctors can practice across state lines, and getting rid of “Certificate of Need” rules, which partly regulate when hospitals can add new services and equipment.

Much of the current health care deregulation is temporary — but the pandemic could act as a springboard for making permanent changes, the Koch network hopes, and for spurring more deregulation, people involved with the network told POLITICO.

The network’s approach — asking for a series of smaller changes to the system, rather than spending tens of millions of dollars on a movement to try to smash it — marks a break with tea party traditionalists, who have tapped back into the spirit of 2009 in recent weeks as anti-coronavirus protests bubbled up.

Multiple conservative groups that have been longtime allies of the Koch network, such as FreedomWorks and Tea Party Patriots, have started lobbying lawmakers for the economy to reopen. FreedomWorks is aiding protestors, spreading information about rallies and offering tip sheets on how to organize a successful protest.

“Our forefathers fought for freedom against the abuse of power, and we will resist it at all cost,” Tea Party Patriots wrote in all capital letters on one recent Facebook post above a photo of angry coronavirus protesters.

Americans for Prosperity spokesman Bill Riggs said that while the network won’t encourage the current in-person anti-lockdown protests, it does share concern for people who are struggling economically.

“What we are seeing across the country are real people with real concerns and they shouldn’t be ignored,” said Riggs. “There are more than 20 million people who are now suddenly unemployed — we need to start listening to each other.”

And though the Koch network is not encouraging protesters, it has signed onto a letter explicitly backing people’s First Amendment right to protest, noting that the government’s emergency decrees on public health can help ensure protesters take precautions like wearing masks and not gathering in large groups.

But the conversation doesn’t need to be so combative, the Koch network believes. In recent years, the network has said it is turning away from partisan rancor toward a more constructive approach — a claim that is now being put to the test during the high-stakes brawl over how to balance the health risks of the pandemic with the rapidly deteriorating economy.

Though some people with knowledge of the network expect it to become more vocal on the economy in the coming weeks as the country’s economic decline likely intensifies, the network has so far focused on its health care priorities and on providing resources, such as a guide on Covid-19 that spotlights best practices from several major businesses and incorporates advice from the Centers for Disease Control and Prevention.

Some of the network’s longtime donors, however, told POLITICO they think the government needs to take individual liberties more into account.

“If we decide to keep our restaurant open, with certain restrictions, we should be able to,” said Chris Rufer, a California-based donor to the Koch network and the owner of a hotel and restaurant in addition to his tomato firm, Morning Star Co.

Rufer, who is 70, has been going into his office and company’s West Coast factories approximately three days a week since the virus started, he said. Guards are taking workers’ temperatures at the door.

Asked about the Koch network’s position on the current wave of protests, Pope demurred.

“I’ll let them speak for themselves,” Pope said.