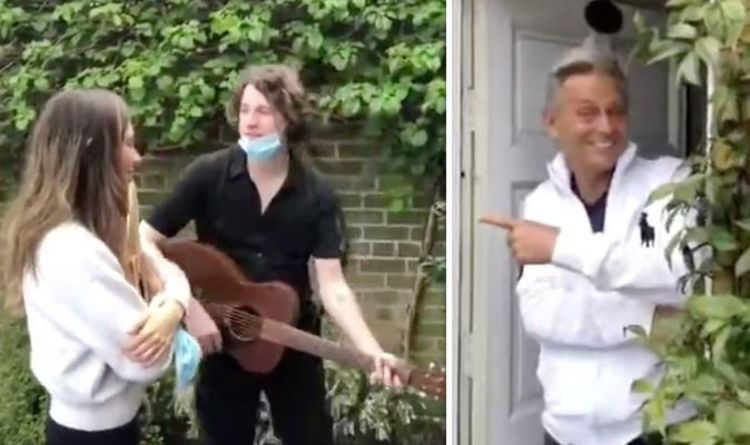 Britain continues to cope with being locked down at home following the coronavirus outbreak this year, and people are facing many kinds of struggles. But it’s arguably even greater for those in the at-risk category. London-based cancer patient, 67-year-old Devon Buchanon, a building contractor and artistic director, was completely taken-aback when one Kooks band-member turned up with a surprise rock concert for him. Lead singer Luke Pritchard and his wife Ellie Rose created an incredibly special moment.

The heart-warming story began when Mr Buchanon opened his door to find two strangers wearing face masks, and automatically assumed they were asking for help.

What transpired was the complete opposite, and Mr Buchanon was left close to tears by the incredible kindness of the musicians.

Speaking exclusively to Express.co.uk, Mr Buchanon recalled: “On Wednesday there was a knock at my door, I opened it to find two young people wearing protective masks and holding guitars.

“I asked them if they were hungry and needed food but then of course realised it was Luke Pritchard the lead singer of The Kooks and his singer-songwriter wife Ellie Rose.

“To my surprise they launched into a set of songs just for me! [The song from the video is Hatful of Love.]” he continued. “Can you imagine what fun it was for me to be having a VIP A-List indie rock gig taking place? Takes exclusive concert to a whole new dimension – my door step!

“I was so touched by this gesture of kindness. It confirmed to me what I already know that there’s so much goodness that can come out of bad situations like this pandemic, and that just when you think things are at their worst a knock on the door can change everything for the better again.”

Mr Buchanon has been suffering with stage four bladder cancer since he was given a prognosis of only six months to live in 2015.

Already an incredible feat, he has now undertaken a total of three experimental drug trials at St Bartholomew’s Hospital in London.

“I now find myself for the first time between a rock and hard place,” he went on. “Because no new trials are being offered at this time until the virus eases and labs open up again. This was pretty depressing for me and also upsetting for my amazing oncology team under Professor Tom Powles at St Barts.

“Isolated at home for the next 12 weeks (because I’m on the most at risk list) with my partner Dmitry, we were both feeling more than a little downhearted after all the progress I had achieved and now to find myself off treatment, isolated and experiencing really awful pain for the first time,” Mr Buchanon shared, carrying on to share how important this small act of kindness had been.

Mr Buchanon has known Ellie Rose’s mother all of the singer’s life, becoming acquainted with Luke over the past two years.

“He has been so supportive of my cancer situation,” Mr Buchanon praised. “He even invited Professor Tom Powles and my team to be his personal guests at one of the Kooks concerts and had the band sign a special vinyl edition of their latest album for him.”